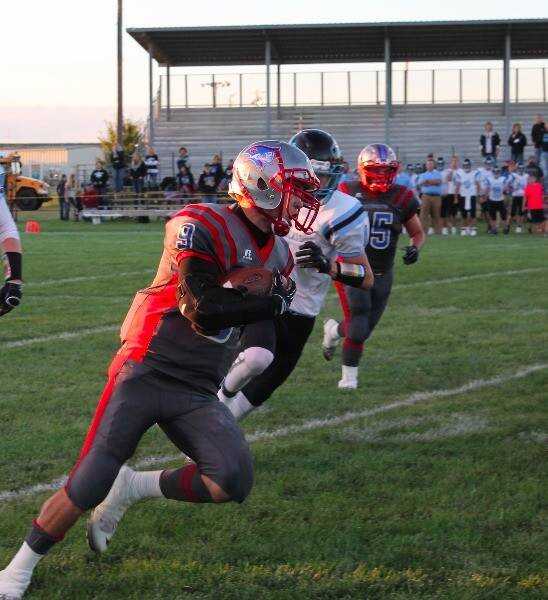 As teams around the state enter day two of high school football practices, why not salute some returning 1000 yard rushers. There are 34 in all coming back in 2016, which is an above average number of backs returning to haunt defenses.

*Matt Neiman-Brady - 5-11, 180, Senior - The tough running Nieman churned out 1,446 yards and scored 27 TDs for the Eagles last year and will be counted on to carry a heavy lead this fall due to heavy graduation losses. Good vision, likes to slide off would-be tacklers.

*Bradley Brunner-Clarkson-Leigh - 6-1, 175, Senior - Brunner may feel like the Lone Ranger for Coach Jim Clarkson's Patriots, being the only returning starter. But Brunner is one of the best athletes in 8-Man football, having rushed for 1,338 yards and 17 scores a year ago. The versatile Brunner also hauled in 7 passes for 216 yards.....5 of those going for TDs. On defense, the All-State candidate made 107 tackles, picked off 6 enemy passes and recovered a fumble.

Riggin closed out 2015 with 5 consecutive 100+ rushing games worth 777 yards and 13 TDs. The young man just seemed to improve every single game. No reason to think Anderson will not top those totals in 2016 as the Knights prepare to contend for a Class D-2 title, battling Humphrey St. Francis and Falls City Sacred Heart for top honors.

*Daniel Libolt-Chambers/Wheeler Central/Ewing (CWCE) - 5-10, 170, Junior - Was a key figure in the Renegades run to the State Championship appearance in 2015. Libolt did it all for Coach Tom Thramer, rushing for 1,115 yards (16 TDs), pulling in 26 pass receptions, good for 441 yards and 7 scores, plus a monster 130 tackles (15 for losses) on defense. Throw in 5 INTS and 2 recovered fumbles and you have a sure-fire All-State prospect on both sides of the football.

I'm not sure you will find a better underclassman in all of 8-Man football than Daniel Libolt. Pure football player through and through.

Zabel rushed for 1,020 yards a year ago (7 TDs) for a 2-7 Titan team that will be loaded in 2016. Zabel is lethal from the middle spot in that Maryland-I offense and just loves to block as well as run.

Head Coach Jim Jacobsen has 9 starters coming back on offense with 6 returning on the defensive side, plus a coaching staff that looks like a Who's Who of high school football.

And by the way, Brody Zabel made 61 tackles for his MLB slot a year ago and really gets to that ball carrier in a heck of a hurry.

*Hoss Smith-Oakland-Craig - 5-11, 190, Senior - Boy, it didn't take long for Hoss to make the transition from 8-Man football at Ansley-Litchfield to the 11-Man game at Oakland-Craig. The rock hard Smith ran for 1,219 yards and scored 19 times for the Knights, who made it all the way to Lincoln before falling to the mighty Aquinas.

Smith impressed the heck out of me on defense in that C-2 title game, making 10 stops. Hoss ended the season with 74 tackles with an incredible twenty of those going for minus yardage. Smith will be part of 7 returning defensive starters of O/C in 2016.

This dude is an outstanding football athlete, and besides, how can you not be a great football player with first name like Hoss. C'mon.

*Brayden Olson-St. Edward - 5-11, 155, Senior - The swift, elusive Olson helped the Beavers win and win all the way to UNK and the 6-Man Championship a year ago. St Ed can't help but be anything but successful when they are coached by former Beatrice assistant Darren Luebbe and former Beaver All-Stater and Wayne State standout, Donny Baker.

Olson sprinted to 1,403 yards and 27 TDs a year ago, while making 72 tackles on the defensive side of the ball. One thing you do not want to do is let Mr. Olson get to the outside when he touches the pigskin on offense. No, no, no. Easier said than done though, Bubba.

*AJ Jenkins-Wilcox-Hildreth - 6-0, 165, Sophomore - This young man is in very elite company, rushing for 1,297 yards (22 TDs) as a Freshman. Not many have gone there folks, and Jenkins has lots of buddies to surround him in 2016 for head coach Gabe Eberhardt and the 6-Man football Falcons.

Jenkins is a smart runner who knows how to survive when getting hit. The youngster knows how to deliver a hit on defense too, making 87 tackles, pirating a pass and jarring the ball loose for a fumble recovery seven times a year ago.