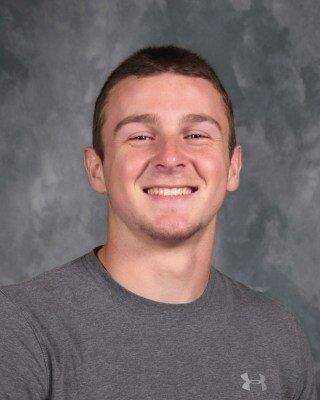 Bennington's Cody Liske (#41). The excellent two-way star has a nickname of Pain Train. I wonder why?

Massive Tyler Ciurej gets most of the press as far as Bell West lineman are concerned, but Sam Vanderslice is certainly no slouch himself and besides, the young man is really, really bright. They say to play center for a top notch Class A high school football program these days, ya gotta be smart. Well, here you are.

Sam Vanderslice mans that ball snapping slot about as good as anyone in the entire state. Defenses that play Bellevue West often times line up with no lineman directly in front of the center, and that would be Mr. Vanderslice. So, pardon the pun, but Mr. Vanderslice has to be quick enough to "slice" through that open gap in a hurry and get to a linebacker. And that he does.

Sam also benches 350, squats 450 and hand cleans 285. Besides that, he is being recruited by Cornell, Columbia and Dartmouth which means he might just be pretty bright. Ya think?

Last season Thunderbird Super-State quarterback Jadyn Kowalski threw for over 3,000 yards, 46 touchdowns with only 5 picks. It's obvious Kowalski had time to throw and guess who not only long snapped the football back to Kowalski back in the gun, then dropped back to pass block successfully........Sam Vanderslice of course.

And, who helped open the holes for Jaylin Bradley, who rushed for 1,712 yards and 19 TDs? If you guessed Mr. Vanderslice again, you are 2 for 2.

Coach Mike Huffman says the Thunderbirds may be even better this season. Holy buckets. They also will run more, a bunch more and with Vanderslice and Ciurej clearing the openings for Bradley, football games could get pretty exciting. One could assume things are looking rosy for Bell West in 2016.

Pound for pound, speed and smarts wise, Sam Vanderslice just may be one of the best players in Class A in 2016. Stay Tuned.

Oh man, if this name is not familiar right now, you will know it well by the end of the 2016 football season. If I were a college football coach, I would be contacting Bennington high school for some film on this young man.

First of all the dude is fast, really fast. Liske was the runner-up in the Class B 100 Meter dash to Norfolk Catholic sensation Dylan Kautz last May at Omaha Burke. The Bennington flyer had the quickest start out of the blocks of anyone I saw at the State Track Meet, clocking a :10.79.

Here are the other particulars on Cody Liske and I trust you are sitting down. 4.4 forty yard dash, 4.4 pro agility drill. Liske can bench 325 pounds, squat 505, and clean 300 pounds. And check out his vertical........40 inches. And this is a player that was basically under the radar last fall, playing for a 5-5 football team.

Last season, Liske ran for 599 yards on 113 carries and scored 4 TDs. But it was on the defensive side where #41 shined. The vicious hitting middle linebacker made 85 tackles, intercepted a pass that went for a pick 6, and recovered a fumble.

Cody Liske is so quick off the snap, often times he would be in the opponent's backfield a split second after the QB handed the ball off to a running back. And Liske just simply plants the ball carrier.

The Badgers return 7 starters on both sides of the ball this coming season, so Liske and company will have a better go-around although they close with Omaha Skutt and Roncalli. Gretna is also in there.

Keep an eye on this kid in 2016. If you're a college coach, imagine having a linebacker that can pull off a :10.7 hundred playing for your defense. And if you ask Cody Liske, the dude will tell you he just dearly loves to hit people when game time rolls around. Also expect the Badger flyer to surpass the 1000 yard rushing plateau this fall.

I will find a way to make a Bennington game this season. It should be well worth the trip.

This young man is about as good as it gets in 6-Man football. 1st Team All-State football Quarterback, leading his Chargers to an easy 6-Man State Championship. !st Team All-State D-2 in Basketball, helping his team to a 3rd place finish at state. The dude is a team leader and shows up in big game time situations every time.

Last year Coach Joey Imus had Valasek and the Riverside football troops so well prepared, the closest any rival came all season long was St. Edward, and they were crunched 67-22. At the center of all this dominating success was the do-it-all carrot topped Noah Valasek.

In 6-Man football the ball must be touched by 2 players before it can be advanced and with Valasek sitting deep in that Riverside offense, his presence is a frightening sight to any defense. It didn't matter who took the snap, when the ball was then pitched to #28, the magic began.

If Noah Valasek decided to run, you were in deep trouble and when he chose to pass, it was worse yet for opponents. The outstanding Cedar Rapids product can throw on the roll-out, sit in the pocket and loft a perfect strike, or roll one way and throw back against his body the opposite direction...............and nail his target.

A year ago, Valasek only attempted 96 throws, but he completed 68% of those for 1,423 yards and 31 touchdowns while suffering only one interception. When the red flash decided to run the ball he was lethal, rushing for 1,501 yards and 25 TDs. That's averaging 12.9 yards a pop. Only Hyannis standout Gabe Haney had a better per carry average.

On defense, Valasek was all over the field, logging 71 tackles. He also pirated a pass and pounced on a fumble.

The Chargers basically lose only two key players from last years State Championship team (Tanner Hudson and Jake Kennedy) so expect Noah Valasek to maybe be even better than last year and lead his Chargers to another 6-Man football title in 2016.

Yes Valasek is that good and his coach, Joey Imus, is the best there is in the 6-Man coaching world.

Well, it's probably safe to assume Cole Frahm is not only the biggest kicker in Class A, but also the most accurate. Last season for Paul Lamongi's Bulldogs, Frahm was deadly on point after conversions and usually money on field goal attempts and in Class A, that can win football games.

Frahm has only played football for two years. As a sophomore in 2014, the rookie nailed 21 of 23 PATS and the two that didn't go through were blocked. Cole was also 7 of 11 in the field goal department with one of those missed also a block. Frahm also kicked off 30 times and knocked 12 of those in the end zone for touchbacks.

Last season, with a year of kicking a football under his belt, the Burke junior booted 25 of 27 extra points, and once again the 2 misses were blocked kicks. Frahm also was true on 11 of 17 field tries, the longest coming from 41 yards away. And how about this stat?

Frahm kicked off 45 times last season for Burke and sailed 34 of those bad boys though the end zone for a touchback. Never mind putting anybody back to return a kick when #90 puts a foot into it.

Last summer at Kohl's Professional Kicking Camp, the nation's largest, Frahm ranked 39th out of 297 of kick-offs (64.2 yards/kick), and 44th out of 288 field goal kickers. Cole kicked 9 of those babies in the pressure round.

This senior will be a real weapon for a vastly improved Burke team which returns all 11 defensive starters and 8 on the offensive side this fall.