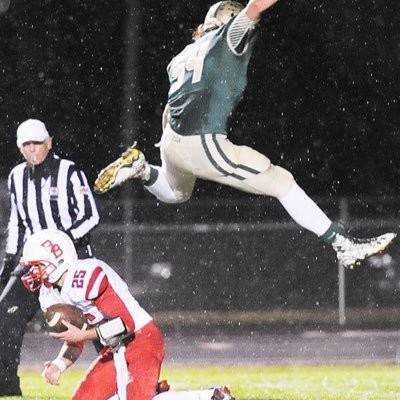 Central City's Jordan Paup (#54) shows one of the reasons why he has two Division 1 football offers already. HOPS!

On this day, I will salute a 1000 yard rusher who is only half way through his already successful career, a returning 2,000 yard passing quarterback, an absolutely terrific lineman that rates as the one of the best in the state, regardless of class, and a wide receiver that certainly looks like a top notch college prospect to me.

Hit those Spots gentlemen and let us salute these young men.

I vote Central City's Jordan Paup the Man you least want to meet on the gridiron in 2016 in Class C-2. This kid has a motor that sets itself in high gear from time he hits the football field.

Last season, the unanimous All-State defensive selection made 109 tackles. An eye-popping 75 of those were all by himself.

Paup already has two Division 1 offers in hand before the 2016 season even sets sail. South Dakota and South Dakota State have both offered and apparently recognize Jordan's incredible speed and strength for his size.

Below Class A, I just cannot recall seeing a better tackler than this dude. Paup gets to the quarterback quicker than anyone can imagine. You have a young man here that runs a 4.55 forty, has a vertical of 38 inches and weighs 230 pounds..........D1 baby.

Jordan Paup showed up to play every single game for Central City's very successful 2015 football team and stood out when it mattered. In a 49-21 loss to eventual C-1 champion Columbus Scotus, Paup made 10 solo tackles, had 3 assists and caused a fumble.

I recently read an article concerning Paup that stated one of his weaknesses was the lack of a great burst off the line of scrimmage. I'm sorry, they must have been watching a different Jordan Paup than I. My thought response to that was "excuse me?"

The Bison will lose a wealth of talent going into 2016, but they also drop down a class to C-2, which is brutal news to anyone facing Mr. Paup....aka Thor.

Central City will be placed in District 6 with Arcadia/Loup City, Centura, St. Paul and Twin River which should give the new Bison faces time to grow and the ever-present daunting figure of #54 will help ease that break-in period.

This youngster made an impression on Class C-1 football before he was old enough to get his driver's license. Jacob Johnson stepped in the action with both feet as a freshman and immediately made his presence felt.

Fairbury has not exactly been a football power the past several seasons and that can present both positive and negative factors for a player like Johnson. Obviously, the down factor would be competing in rugged Class C-1 against teams like Wilber-Clatonia, Milford-Dorchester and Falls City right out of the gate. The upside of the deal is playing right away when you have some special skills as a freshman.

As a freshman, Jacob Johnson slipped on those crimson and gold Fairbury duds and not only started both ways but excelled on both sides of the football.

Johnson rushed for 721 yards and 9 TDs, caught 23 passes for an additional 407 yards and 4 scores, and made 75 tackles on defense, 45 of which were solo stops. He also broke through for 12 tackles behind the scrimmage line.

Last season as a sophomore, the tough-as-nails, pure football player exploded out of the gates to lead the entire state in rushing after 4 games. After a record setting September 18th game against Johnson County Central, everyone knew who Fairbury's Jacob Johnson was.

The hard running sophomore ripped through Johnson CC's defense to the tune of 335 yards on 19 carries, equalling a C-1 State Record by scoring 7 touchdowns in that one. That brought his 4 game total to 818 yards on only 88 carries and 12 TDs.

On defense, the sophomore MLB made 77 tackles. The amazing thing is, the fact that 58 of those were solo tackles. Now don't get me wrong because I think Jacob Johnson is a terrific running back.....obviously, but this dude can flat bring the wood when he makes a tackle. Bang! #22 is about as sure a tackler as you will find in Class C-1.

The 2016 schedule brings no easier a road for the Jeffs with the addition of Ashland-Greenwood, but Jacob Johnson will be as consistent as he's been the past 2 seasons. The lad is that good. A playoff berth would be sweet for Jacob and his buddies. The Jeffs have qualified only 5 times in history and have yet to garner a win in the post-season. Maybe Johnson can help change that this fall.

Class B's returning passing yards leader. That is correct. Only Northern Iowa recruit Christian Ellsworth of GINW had more yards a season ago.

Last season, the 6-3 Ruelas completed a tad more than half of his 254 throws for 1,982 yards, 23 TDs with 10 interceptions. The good looking junior threw for over 200 yards in his first 7 games in 2015 before running into Plattsmouth and Omaha Skutt the final two games of the regular season.

Ruelas tied a 50 year old State record by throwing for 6 touchdowns against Crete last September in the Vikings 60-37 victory. 12 of 22 passing for 290 yards, 6 TDs and 24 yards a completion is quite the night to remember for the 200 pounder.

The thing that made Dillon Ruelas click a year ago was an outstanding offensive line, great receivers, and the dude's ability to launch those passes in around 2.37 seconds from the time he took the shotgun snap. Even out of a 4 to 5 step drop, this ball was leaving his hands in less than 3 ticks.

It may be tougher for Dillon to match those 2015 number this fall due to heavy graduation losses in the line. He will have 2nd leading receiver and all-district Greyson Skrobeki back in 2016. Skrobeki hauled in 34 passes from Ruelas for 493 yards and 4 TDs a season ago. So we shall see if Dillon's line develops in 2016. If so, expect big numbers for the good-looking senior once again.

A true shining star in a city starving for football talent at the Class A level. I have seen this kid live twice and liked what he produced for a 2-7 football team last year.

Both South Dakota State and Northern Iowa have offered the Southeast product, who has the ability to move all over the Knights offensive sets. Smith is a legit 4.5 forty dude who has also runs a 4.34 pro agility drill. With a vertical of 36, Smith can win the jump ball on most occasions downfield.

Despite the subpar 2015 season for LSE, Sterling Smith caught 27 passes, good for 400 yards and 4 scores. On defense, the quick moving DE has the ability to fight off blockers with decent consistency and reach the QB or ball carrier in a rush, pardon the pun.

215 pounds seems a little light for a D1 tight end, but I wish Nebraska would take another look at this young man. Sterling Smith has the potential to play more than just one slot and could actually be a nice wide-out with his speed, although there are faster folks occupying that position. This kid has very instinctive moves that leave defenders looking silly at times at the high school level.

With any kind of luck, Lincoln Southeast will improve this fall and one thing Smith does have going for him numbers wise, is the return of starting QB Jack Strong. The latter threw for 800 yards as a sophomore and what appears to be an absence of a running game to begin the season, the passing game could be the Knights bread and butter early on. That will benefit Mr. Smith.