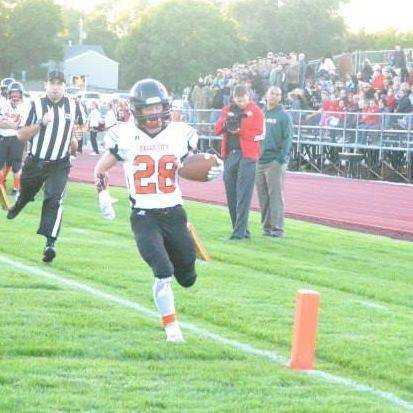 Falls City RB Zayne Heckenlively (#28) strolling into the end zone, a far too familiar sight for defenses in 2015.

Today we spotlight another 1000 Yard Rusher, a terrific 8-Man quarterback, a wide receiver that finished 2nd in pass reception yardage while competing against a rugged Class B schedule, an eye opening 2 way lineman, and one of the state's best kickers.

So, raise the curtains, hit the spots, and let's talk about these four young stars who will certainly make the headlines this Fall.

This young man makes that Falls City slick Single Wing offense click. Head Coach Darin Fritz borrowed an offense that my late father-in-law Ken Baker ran way back in 1941. Heckenlively took the direct snap from center many times in the hard to defense formation and followed his backfield blockers to compile some very impressive stats in 2015

Zayne toted the ball 172 times for 1,501 yards while rushing for 20 scores a year ago, leading his Tigers to a 7-3 record and a playoff appearance. That's motoring to the tune of 8.7 yards a pop and a buck fifty worth of yards every outing.

The smooth running Heckenlively runs with a terrifically low pad level and possesses tremendous balance with the ability to make defenders slide off his body like water off a duck's back.

Most intelligent defenders can tackle a good running back by wrapping up his legs, but Zayne Heckenlively is very difficult to stop this way. Number 28 either skips through the tackle as if running on hot coals, or just glides by the outstretched arms. This dude plain and simple makes life difficult for defenses and with 3 blockers leading the way after he takes that snap......look out.

On defense, the vicious hitting cornerback led Falls City in tackles with 79 stops, ten of which were for losses. Zayne also pirated 2 passes, and recovered a couple of fumbles. Heckenlively also returned a punt for a score and scooped up a blocked punt, making a beeline for paydirt a year ago to total 23 TDs on the season.

This lad will be even more dangerous on offense considering that "O"-Line returns four starters from last years already prolific crew. With Ben Baumann (6-5, 275), Trevis Keller (6-1, 220), Dalton Kunnel (5-11, 245), and the "runt" of the bunch, 6-0, 180 pound Carter Hunzeker opening those running lanes, Zayne Heckenlively should shine even brighter in 2016.

This dude doesn't weigh a ton, but has been a 3 year starter for the Warriors and put up huge passing numbers. In three seasons at Neligh-Oakdale, an 8-Man football team, White has completed 60% of his 581 tosses for a gaudy 5,090 yards and 66 touchdowns.

Each of the past two seasons, Grant White has eclipsed the 2000 yard mark with his pinpoint throws. Just last season, the slippery QB completed 63% of his 218 passes for 2,159 big ones and 29 TDs with only 4 interceptions against teams the caliber of Burwell, Elgin Public/Pope John, Clearwater/Orchard and BDS.

If you recall, Burwell and BDS played for the D-1 Championship, Clearwater/Orchard was a semifinal team and Elgin/Pope John made it to the quarterfinals. It was BDS that eliminated White and Neligh-Oakdale in the 2nd Round of those D-1 playoffs.

Now, Grant White did not run the football much a year ago with solid senior Garrett Allemang in the backfield, but with Allemang graduating, White may have to log more carries in 2016.........and this kid can run the football if he has to do so..

Two years back, Grant White ran for 536 yards while still throwing for 2,089. The lad is a dual threat quarterback. And the nice thing about the upcoming season for White?

There will not be many defenses in Class D-1 that will be capable of stopping Grant White if he isn't forced to scramble for his life. This gunslinger is just that proficient and could end up surpassing the 7,000 yard plateau for career passing yardage.

Think about that one.

As sure handed as they get, Cole Spady hauled in nearly every pass that came his way in 2015. And his #13? His stats would seem to indicate his number was only unlucky for those defenders that drew coverage on the 6-2 Spady.

In 9 games versus Class B competition a season ago, only Aurora's Todd Honas had more receiving yards than A/C's #13. Spady hauled in 51 receptions from quarterback Breckon Reed, good for 882 yards and 11 scores. Not sure what Spady's vertical number is but the dude generally out jumped most all of his defenders and had good enough hands to usually came up with the ball.

Last year Adams Central began the season with 4 consecutive losses, but Spady was rock steady in every single loss. During that span, the wiry junior pulled in 31 passes for a nifty 495 yards and 6 touchdowns. The Patriots rallied to win their next 4 games and Cole Spady remained consistent even though A/C turned more to the run game with Marc Zeckser getting cranked up the last 5 contests.

Adams Central missed a chance at the playoffs when McCook sent them packing in the regular season finale, but Spady was there as a huge contributor the entire journey.

Adams Central drops down to C-1 this Fall, having to replace Reed at QB, but will have Zeckser in the stable at RB. If the Patriots can come up with a quarterback that can get the ball to Cole Spady, that portion of the offense will be deadly.

Good lord is this kid quick. Stofer is off the ball from his defensive tackle position so quickly defenses simply cannot react quickly enough. Are Division 1 colleges taking notice?

Is the Pope a Catholic? Rudy the Beauty has FIVE D-1 offers in his pocket as we speak. Wyoming got the D1 offer bandwagon rolling way back on March 22. Eight days later South Dakota offered. Northern Iowa rolled one out his way early in May, then Illinois State.

Super program North Dakota State offered Monday, so Mr. Stofer, as I choose to call him, is a popular man these days.

The Bearcat standout attended both the Nebraska Big Man camp and the Friday Night Lights event and lowered his forty time to 5 flat and his pro agility drill to 4.54.

I just think this dude has the build that should have Division One programs chomping at the bit. Last season, Stofer looked so lean on his then 6-4, 240 frame and still maintains that appearance these days. 262 pounds spread out on a 6-6 frame gives the look of a lean, mean, quick-as-a-wink tackling machine and a menacing figure to a quarterback.

That's Rudy Stofer all the way.

Check this one out. His bench press is listed as 225. If you are on Kearney's 2016 schedule and buy that one, I have some swampland in Florida I'd like talk to you about.

Stofer's leg strength alone is enough to convince you the kid is a force in the weight room. And we haven't even talked offense yet. You just aren't going to find a bunch of young guys running around Nebraska high school football fields that have a frame like Rudy Stofer offers.

If I were a D1 recruiter, I'd make my presence felt at Stofer's front door, as well as Gretna's Patrick Arnold.

If Dominic isn't the best kicker in the state, he certainly has to be close. As a junior, Long nailed 10 of 12 field goal attempts, including a state C-1 record four against GICC early last fall. Dominic also booted a 51 yard beauty in 2015.

The Swede smoothie also put 14 of his 24 kickoffs into the end zone for touchbacks a year ago and was named MVP of the Elite Performance Camp in Wichita last summer. During that camp, Long booted a 65 yard FG and had the camp instructors saying all kinds of great things about this young man.

One of the quotes that caught my eye by the people who ran the Wichita camp was "he is an un-questioned 5 star kicker as soon as he improves his kickoffs."

You know what I'm thinking? I'll just bet Dominic Long worked hard on that end of the deal and will be a real sparkler when the Swedes take the field in August. How would you like to have a weapon like this in your arsenal?

Just in case you may be interested.........Longest Field Goal on record in Nebraska Prep Football - 59 yards by Millard South's Chris McClanahan in 1999. The C-1 record of 57 yards is held by Drew Farlee of Norfolk Catholic. Farlee nailed that baby back in 2010 against Wahoo.