Centura's Travis Holcomb is a Man. 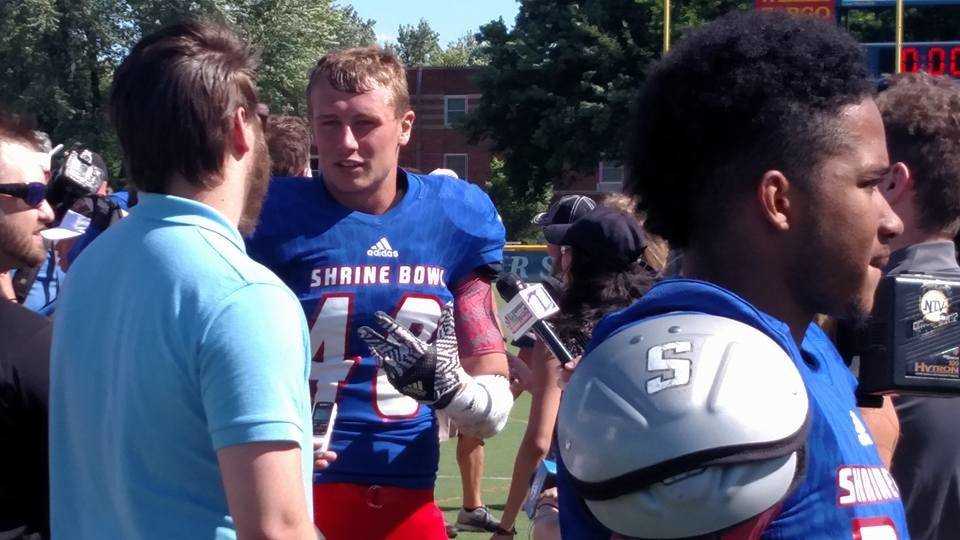 Centura's Travis Holcomb is a Man.

I have seen hundreds of high school athletes throughout my lifetime and many have impressed me for a variety of reasons. But today, I witnessed something that I haven't seen for years. A feat that defines what a high school athlete should be all about.

Back in 1967 I saw a running back named Gage Hazen from Fremont run very well in the Shrine Bowl in Lincoln. Later that day, Hazen arrived late in GI, but was a thorn in Grand Island's Legion baseball teams side. 18 years later, a Grand Island running back named Kevin Trosper ran so well in the Shrine Bowl that day in Lincoln, he was named MVP. Later that evening, he too arrived late to Grand Island, but helped his Legion baseball squad to a huge win despite making the long trip back.

Gage Hazen and Kevin Trosper came from the same mold. They were almost too good to be true. Both were Men at the age of 18.

Today, 31 years after Trosper's feat, 49 years in the rear view of Hazen's big day, a youngster from a high school that enjoyed limited success in boys sports, accomplished a crowning achievement that may be difficult to top.

Centura high school's Travis Holcomb, a 6-4, 210 pound Class C-2 athletic specimen, not only started for the North squad in the Shrine Bowl in Kearney, but was named MVP on Defense after helping his team to a 27-13 win over the South. Holcomb recorded 6 tackles, one going for a 2 yard loss.

2 Hours later, Travis Holcomb was on the GICC basketball floor going through warmups with his Blue All-Star teammates for the Tom Dinsdale All-Star Hoops Classic. The multi-talented, well rounded young man from a small town just north of Grand Island never missed a beat and kept a promise that he would show up on time and play his heart out in an all-star basketball game that frankly may be but distant memory in a few months.

Travis Holcomb is a Gentleman, a young man that comes from a mold I saw when I grew up in the 60's. This kid played his heart out for a Centura football team that was only 13-23 during his high school career. The rugged Holcomb basically played in only 7 games last fall, yet managed to run for 1,288 yards and make 94 tackles for a 4-5 football team.

On the basketball floor, his Centurion teams managed only 26 wins in 90 games during his career. Despite the lack of success, the 6-4 Holcomb set school records for career field goal percentage (51%), most free throws in a season (77), most blocked shots in a career with 220, and most blocks in a game (8).

In track this past fall, Holcomb decided to run the 200 meter dash a week before districts. He ran 2nd in the LouPlatte Conference meet with a :22.94. A week later at the District meet, Holcomb blazed to a :22.2, winning the 200. The following week at the State Track Meet, the Centura senior won his preliminary 200 heat with a electronic timed :22.54, then took home a 2nd in the Finals with a :22.63. Only Norfolk Catholic freshman sensation Dylan Kautz could best Travis Holcomb that day.

No, Travis Holcomb didn't set any records in the Tom Dinsdale All-Star Classic at GICC tonight, but he fulfilled his commitment by being there on time for warmups, barely looking winded, smiling the entire time. The former Centura high school standout scored only 4 points, but played well defensively and answered the bell every time Blue team all-star coach Scott Carlin sent in him into the battle. He had legs too and never, ever showed signs of fatigue.

I stopped the pre-game player introductions after Holcomb's team had been introduced. I persuaded him to come to the scorers table where I announced his incredible feat in the Shrine Bowl, recognizing the fact he was here and actually playing in this game. He seemed humble and almost too shy to allow me to let the fans in attendance know what he had done. Travis Holcomb deserved it and the crowd responded in deep respect.

The thing that overwhelmed me was not the fact Travis Holcomb garnered the MVP Defensive Player in the Shrine Bowl. It was the fact that an 18 year old young man made and kept a promise to compete in an event that was honestly paled by the magnitude of the Shrine Bowl, an event that has been staged since the late 50s. Following in the footsteps of Gage Hazen and Kevin Trosper, Holcomb jst may have even tooped their feats.

In my heart, I knew that this magnificent specimen of a high school athlete was a genuine human being and a true gentleman. But just in case in case you didn't realize this before tonight, I will relay this message to the masses.

Travis Holcomb is a Man.