A Legend is honored at Hawks Field 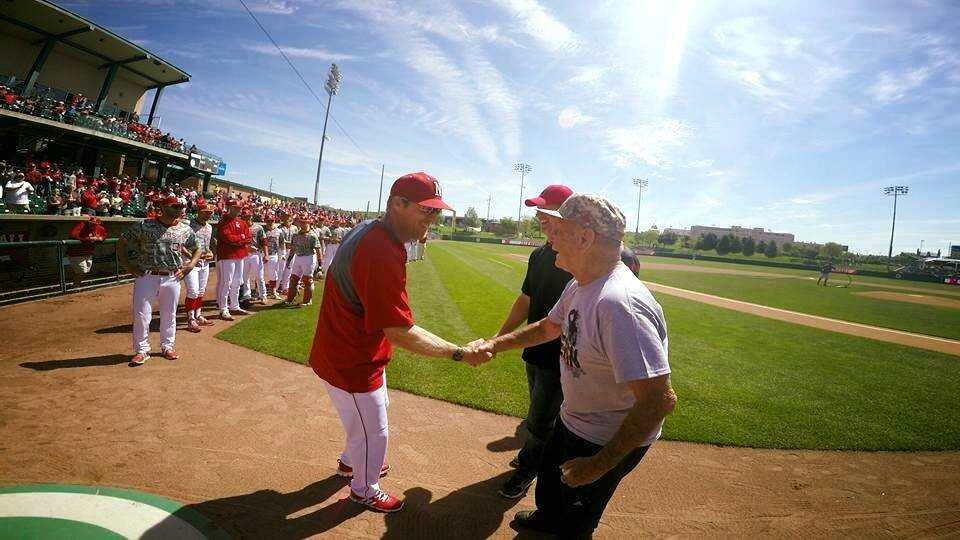 A Legend is honored at Hawks Field

Sunday, May 15th was a day to remember at Hawks Field in Haymarket Park. The Nebraska baseball team celebrated Military Appreciation Weekend and as part of those festivities, honored one of Nebraska high school sports true legends.

Former Genoa high school multi-sport star Donald Baker was called upon to throw out the first pitch prior to the start of the Nebraska/PennState game. The 90 year old Navy veteran calmly took the ball and tossed a wicked sinker to Husker catcher Taylor Fish. The former Kearney high standout then gave the ball back to Mr. Baker and shook his hand in appreciation, as did the entire team and coaching staff.

I wonder if those Husker players and coaches knew they had just crossed paths with a true Legend? Something tells me they may have known. You could see it in their eyes.

Don Baker came from a family of 12, a group who lived through and experienced the Great Depression. To further complicate matters, as if anyone needed it back then, Don's father suffered a crippling stroke at age 49. A stroke so severe it prevented the elder Baker from ever working again. Times were unthinkably difficult in an era where there was no place to turn for help, let alone lose a family bread winner.

As a result, the Baker clan grew up so dirt poor they couldn't even afford to pour milk on their Cornflakes. They had to use water. Consequently, the Baker boys grew up tough, with Don and older brother Kenny leading the way. Many young people never finished high school in those times, but Don and Kenny Baker were determined to not only finish their education, but to become great athletes.

I recall Don Baker telling me they could not afford a football so they simply rolled two thick socks together into a ball and played football in the potato patch, since there was no grass in sight.

Those times must have molded Don because the slender, but rock hard Baker boy from Genoa went on to follow in the footsteps of his old brother Kenny, being selected as an All-State 11-Man quarterback by the Omaha World-Herald in 1942. Don was equally talented in basketball and a multiple event ace in track.

But it was baseball and basketball that did not end after high school for the Legend from Genoa.

Don Baker went on to haunt opponents on the hardwoods, playing for the powerful Behlens basketball team in Columbus. Mr. Baker was a star baseball player for many town baseball teams from the talent rich Northeast Nebraska area, and he was doing it deep into his 40s

The late, great Edsel Wibbels of Columbus high and University of Nebraska track fame, once told me Don Baker "schooled" many high school and college athletes, 20 years younger, on the basketball court while playing for town teams. That was basketball folks, not baseball. A man in his 40s making "kids" 20 years his junior look foolish playing hoops. I can almost imagine a guy in his 30s maybe doing that in baseball, but in a fast paced game like basketball? Unreal.

And then there was baseball where Genoa's Donald Baker was one of the most sought after "pitchers for hire" in the entire state of Nebraska. You see, in those days small town baseball was huge and these teams would regularly hire a pitcher if they were involved in huge weekend games. If it was Central or Northeast Nebaska, Don Baker was the hottest arm in the business and got the first call. And once again, Don was performing his magic well into his 40s.

So it was only fitting on this gorgeous day at sunsplased Hawks Field, home of Husker baseball, that the University of Nebraska called on 90 year old Donald Baker to throw out the first pitch. With lovely daughters Connie and Janelle at his side, as well as son Dave, All-State football player like his father, the legendary athlete did his thing amidst thunderous applause of 5,429 fans in attendance.

And it didn't stop there. The entire Husker baseball team filed past Don, shaking his hand, along with Nebraska baseball skipper Daren Erstad. And the very cool thing about it was the fact over 80 folks from the St. Edward area, Don's home these days, made the trip to Lincoln. Among this group was around 30 members of the Baker clan, a true sight to behold.

A day to remember forever. A day to dream about when you drift off to sleep. A man who carved his way into the sacred record books of high school sports in this state was given his due long after his playing days were over.

And like so many others I've written about....Edsel Wibbels, Ed Weir, Larry Vlasin, Bill Holliday, and now Don Baker........all so humble, all so appreciative, and never boastful.

They are all alike you see, formed in the same granite-like mold you rarely see today. Raised when times were tough and somtimes unbearable. We, the generation of today, so lucky, so fortunate in so many ways, cannot fathom in a million years what these guys went through. But it was just that very thing that shaped them into what they were later in life.

........and how fitting it was on this very day, what St. Edward banker and high school sports enthusiast Kevin Cruise programmed on his electronic signboard................