Nebraska High School Basketball loses one of it's Best. 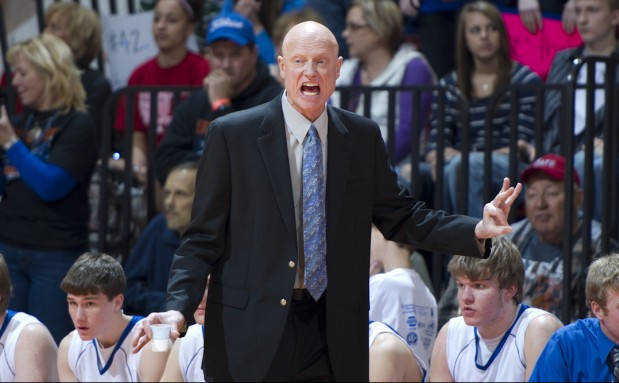 Nebraska High School Basketball loses one of it's Best.

Seemed like a great night to take my basketball crazy wife to a game last evening. I prayed that Pauley Beranek might feel well enough to attend. My heart dropped when I didn't spot the wheelchair at the end of the bench.

We found a spot by the Teichmeier clan a few rows up from the floor. It wasn't long before a few Aitkens arrived. I knew by their eyes, things weren't good.

Somehow I knew when the sun came up today, I would have a text that Coach B was gone. #BSTRONG.

It was back in the early 2000s when I first saw Pauley Beranek coach a basketball game. I loved his coaching style and told him so after the game. Of course I was a football guy, but this hoops coach was different. Full of personality. He told me if I kept going to games, I would learn to love the sport. Coach B winked as he walked away.

Pauley always shook my hand when our paths crossed after that. These basketball coaches weren't so bad after all. After a loss to Bill Gavers one night at GICC, Pauley told me the same thing my late father, Bobby Mills would tell people. "I'm just going to have a couple of sons play on this team and do it right one of these days."

Boy, did Coach B ever follow up that statement. Between the years of 2004 and 2012, Pauley coached Ravenna to 209 wins with only 33 losses. During that span there were 4 Class C-2 State Championships, 1 runner-up, two 3rd place finishes and only one season when the Bluejays didn't make it to Lincoln.

It was during son Drake Beranek's sophomore to senior seasons, that Pauley's Bluejays produced 73 wins and 7 lonely losses.

One of those losses came in 2006 when Pauley took Drake and his legendary teammates to face the mighty Bellevue West at the Thunderdome. It was recognized as the most anticipated high school basketball game in the history of the state in the eyes of many. The game was hyped to such a fever pitch, the doors were locked 45 minutes before tip-off at Bellevue West.

One sports scribe wrote "Drake Beranek is Ravenna's 6-foot-4 Mr. Everything wiry, reed of a boy with a floppy mop of blonde hair, his father's blue eyes and a jump shot you would consider pulling a Faust to possess. And in the first quarter of the game, he makes the Bluejay fans yell so loud that Don Urwiller, who graduated from Ravenna High in 1937, turns down his hearing aid in the front row."

Drake would score 18 first quarter points on the mighty Thunderbirds as Ravenna built a 31-13 lead early in the 2nd stanza. Pauley's proud team, that risked a 41 game winning streak by playing the game, eventually lost the game 68-63, but carved a lasting impression in the minds of every basketball fan in the state forever and ever.

You see, that is the way Paul Beranek did things. He took a Class C-2 basketball team to play a game against a school whose population was bigger than the entire town of Ravenna. No fear. #BSTRONG.

Pauley performed the magic again with another son, current UNK star Connor, in a stretch spanning 2009-2012. Three State Titles during that spell and a 98-14 record.

Unbelieveable. Magic things happened in the town of Ravenna by the former paperboy from Lincoln that the Journal-Star proclaimed as "a talented artist, successful businessman, and straight-A student at the age of 11", as young Paul Beranek was honored as one of that newspapers "Carriers of the Year." !971 was the year.

You know, they throw the term "Legend" around frequently these days. Some deserve the honor and those who qualify took years of far above average work to earn that lofty title. My father was considered a "legend" in the music business, having played with some of the biggest names in the business back in the day. Legendary high school basketball coaches like Lincoln Northeast's Ed Johnson, Ed Colleran of Spalding Academy, Fred Letheby-Madison, and Bill Ramsay of Cozad have earned that title after years of success and developing young men into winners.

But Pauley Beranek earned the title of Legend in that 9 year span of a 32 year coaching span. Not many would argue that. None of us will probably live to see that again. #BSTRONG

Paul Beranek was much more than a coaching legend. He was a true teacher, father, husband to his family and a man with a million friends. We all have our memories of this Legend.

With me, it was his wink. One night north of Cairo, when Pauley brought his Ravenna team to play an awful good Centura squad, I arrived late. No room. I decided to stand against the wall to the right of the basket just a few feet away from Ravenna's bench. Before the game, Coach B had every one of his players come over and shake my hand. It was a moment I'll never forget. Honest to goodness, that is the most humbled I have ever felt in my life. After the boys did it, he looked my direction and winked.

On another occasion, my wife and I were walking into Gordmans in Grand Island. Pauley and his wife Brenda were right ahead of us. I apologized to Coach B for not coming to Ravenna to watch his team lately. Pauley just looked at me and stated "come on up sometime soon and bring your girlfriend there with you.......I'll be bringing mine" as he nodded toward his wife.

Another time I saw him at the State Track Meet. It had to be 94 degrees scalding hot and there stands Pauley Beranek by the fence........with his shirt off. I told him he was going to fry. He just smiled.....and winked.

My son Rob, who was Bill Gavers assistant at GICC for 16 years, reminded me of the times Pauley came down to play hoops in the rugged GICC summer basketball league. Rob, a redhead who Pauley always called "Rusty", said Coach B would routinely dunk over players much younger than himself. He never backed down.

All those who remember Paul Beranek are grieving during these days leading up to a Holiday normally filled with joy. Obits always say the same thing when people lose their life to the dreaded cancer. "He lost his courageous battle with cancer".

Let's make one thing perfectly clear concerning that phrase. Cancer may have taken Pauley's body, but cancer couldn't beat his spirit. That spirit and legend will live with us for all time. Nothing beat Coach Beranek when he put his mind to it. He feared nothing and fought through the tough times to carve his name in in the record books in an alarmingly short period of time. One in a million.

No worries, your family and the rest of us will carry on your legacy down here Pauley.

Thanks for the memories, Coach. Did you catch my wink? #BSTRONG