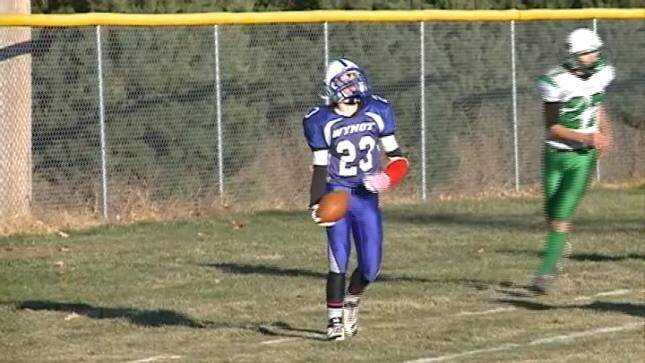 Well, the 2015 State Finals field is set in all classes. The 8-Man semis were played in decent weather at all 4 sites and we'll include some of those performances in this salute today.

We will hit the ground running with Part II, so let's raise the curtain and hit the spotlights.

*Troy Gilligan- Anselmo-Merna - Closed out his spectacular Coyote career by running for 221 yards on 40 carries in Anselmo-Merna's 56-24 loss to Chambers/Wheeler Central (CWC). Gilligan scored every one of the Coyotes touchdowns, reaching the end zone on runs of 5, 6, 23 and 5 yards. Gilligan, a three year starter at quarterback, stands 5-10, but weighs only 135 pounds. This young man has shouldered the load throughout his 3 year run when things got tough for Anselmo-Merna due to injuries. It seems like when some of the key players went down at Anselmo-Merna the past 3 seasons, Gilligan was always there to pick up the slack.

Troy Gilligan just missed being a rare 3 year 1000 yard rusher/1000 yard passer. This season, Troy rushed for 1,335 yards and threw for 911. The past 2 seasons, he has pulled off the double. Here are Troy Gilligan's final Career Statistics: (unofficial)

Gilligan started at quarterback for 33 games for the Coyotes, leading his team to a 27-6 record during that time, 3 playoff appearances, at least one playoff win each year, and led Anselmo-Merna to the finals a year ago where they fell to Exeter-Milligan 40-26. Pound per pound, one of 8-Man football's toughest players three years running.

*Daniel Libolt- Chambers/Wheeler Central (CWC) - 5-9, 170 sophomore became CWC's 2nd back to hit the 1000 yard rushing mark in 2015 when he ran for 21 yards on 19 carries in the Renegades 52-15 win over Sandhills-Thedford Monday night. That gives Libolt 1,077 yards for the year and 16 touchdowns. The sophomore is also a receiving threat out of the backfield, catching 21 passes for 376 yards and another 7 TDs this fall.

Daniel has cracked the 100 yard rushing mark in CWC's last 3 playoff games and in the Renegade's quarterfinal win over Anselmo-Merna, he ran for 103 yards and a TD, caught 4 passes for 88 yards, and 3 of those receptions went for scores. Libolt is also the 2nd leading tackler on the team with 122 stops, 14 for losses. The thought has crossed a few knowledgeable football minds that this kid just might be pretty good.

*Riggin Anderson- Sandhills-Thedford - Libolt's sophomore counterpart also surpassed the 1000 yard rushing plateau in Sandhills-Thedford's loss to CWC last night. The 5-6, 145 pound Anderson really carried the load in Monday's semifinal, toting the ball 24 times for 164 yards and a both of the Knight's touchdown runs. By the way, Sandhills-Thedford only trailed CWC 16-15 at the half.

Riggin finished the year very strong with 5 straight 100+ rushing games, including three in the playoffs. The sophomore concludes the year with 1,122 yards and 18 TDs. Anderson also caught 11 passes, good for 216 yards and 4 scores. This youngster actually rushed for 777 of his 1,122 yards and 13 of his 18 TDs in the Knight's last 5 contests. That called clutch, cowboys and cowgirls.

Keep one thing in mind about this Sandhills-Thedford football team. They will have a tremendous group of player returning next fall, including standout quarterback, Jacey Nutter, who has already thrown for 4,801 yards plus 79 TDs and rushed for another 1,182 yards and 17 mores scores his last 3 seasons.

*Kyle Wemhoff-Humphrey St. Francis - A rare double appearance in our Friday Night Heroes. Kyle made Part I just 2 days ago, and now the Energizer Bunny does it again. If you recall, Wemhoff carried the ball 47 times for 235 yards in the Flyers quarterfinal victory over Falls City Sacred Heart. 6 days later, in Monday's semifinal win over Clearwater/Orchard, the 160 pound senior had only 27 carries, but still rambled for 231 yards and two scores in the Flyers 40-12 win over Wynot. Wemhoff only rushed 3 times in the 2nd half of that Wynot game because St. Frans owned a 40-0 halftime advantage. One shutters to think what a well rested Kyle Wemhoff might do in the State Finals with that excellent line blocking St. Francis in front of him.

The tough running Wemhoff enters that D-2 State Championship game with a rushing total of 1,784 yards and 27 TDs. The most impressive thing about this young man is his 8.8 per carry rushing average, considering the majority of his handoffs carry him right straight into the heart of the defensive line. That 160 pound body takes a frightful beating every game.

*Riley Tegtmeier and Ben Elznic- BDS - These two hooked up for a couple huge touchdowns in Monday's 46-28 semifinal win over Creighton. Tegtmeier hit Elznic with a pair of 46 yard touchdown passes, both at critical times. The first TD came on the Eagles very first play from scrimmage and buoyed a 32 point explosion for BDS. The second one literally crippled Creighton, who had staged a furious rally to pull to within 32-28 with 4:03 remaining in the game.

Tegtmeier had been cramping all afternoon and Elznic injured a shoulder and was basically tackling with one arm and would have to haul in a pass the same way. The poised Tegtmeier took a play off to get a cramp rubbed out, then re-entered and promptly tossed the second 46 yard strike to Elznic. That played seemed to be the clincher for BDS, who wrapped up a return trip to the State Class D-1 Finals to face Burwell.

QB Riley Tegtmeier will enter the 10:45 am curtain raiser next Monday with some hard to imagine passing statistics. In 12 games this fall, the 6-0, 180 senior has completed 75 of his 110 passes (68.2%) for 1,403 yards and 22 touchdowns with only ONE interception. That means every time Tegtmeier completes a throw, it goes for nearly 19 big ones. It also means every 3.5 times he launches an aerial, it is good for a touchdown. And Elznic? The 6-2, 195 pound senior has 25 receptions for 512 and 6 TDs. That's not really Ben's expertise though. You see, Elznic was an All-State linebacker a year ago, and has already logged 89 tackles, made 4 sacks, picked off 3 passes, blocked a kick and disrupted a gazillion and one offensive plays in 2015.

*Troy Taubenheim and Breyden Eckhout- Amherst - Most feared pass/catch duo in 8-Man football sparkled, even in the Broncos semifinal loss to Burwell last Tuesday. The incredibly accurate Taubenheim completed 32 of 51 passes for 391 yards and 5 touchdowns and Amherst still lost, 64-41! Breyden Eckhout pulled down 14 of Taubenheim's passes for 217 yards and 3 of the 5 TDs. Here are this Dynamic Duo's season totals for 2015;

Eckhout also averaged 18 ppg for the Bronco basketball team a year ago and 13 as a sophomore. Taubenheim is also an excellent hoops player, averaging 8 ppg for an Amherst team that will contend for a state title this winter.

*Cody Stratman- Wynot - How do make this list by rushing 3 times for 3 yards and catching 4 passes for 50 yards? Because you are arguably the best back in Class D-2 and were ineffective after absorbing a big hit in that 40-12 loss to an awful good St. Francis football team on Monday. I've seen ever so many running backs in my day and Cody Stratman is certainly the most exciting, most talented back I have seen in 8-Man football this fall this season. Amazing, Houdini-like moves, lightning quick feet, and cuts that are done in the flash of a millisecond. The 5-8, 150 pound Stratman has made more defenders miss than opposing coaches care to count. I'll bet this kid is on everybody's all-state ballot.

For the season, Cody Stratman rushed for 1,817 yards on 167 carries (11/per) and hit the end zone 42 times. Cody also ran for 274 yards and 5 TDs against Exeter-Milligan, traditionally one of the toughest defensive teams in all of 8-Man football. Last season, Stratman ran for 1,984 yards and 30 TDs, bringing his career total to 3,869 yards and 89 touchdowns. Geez, this kid is good.

***Creighton Bulldog Fans*** - 8-Man football's version of Ashland-Greenwood's fan base. Yesterday in Shickley, these fans, young and older alike, displayed great sportsmanship during all phases of the game. Remember, BDS jumped on Creighton 32-0 before anybody could blink an eye, but there was no difference in the attitude of these Creighton fans when they were down 32 or when the team staged the big rally and closed to within 32-28. This group of people stayed positive, encouraged the team and even when the game had been decided, the classy Creighton faithful were still encouraging their beloved Bulldogs to finish with pride.

No discouraging words to the officials, no reaction to calls that went against their team. Steady and classy as she goes.

I just have to salute a group of people like this, and there was quite a following to salute. If I had the bucks to purchase two gigantic Sportsmanship trophies for football, I'd be transporting those babies to Creighton and Ashland-Greenwood. Soooo impressed.