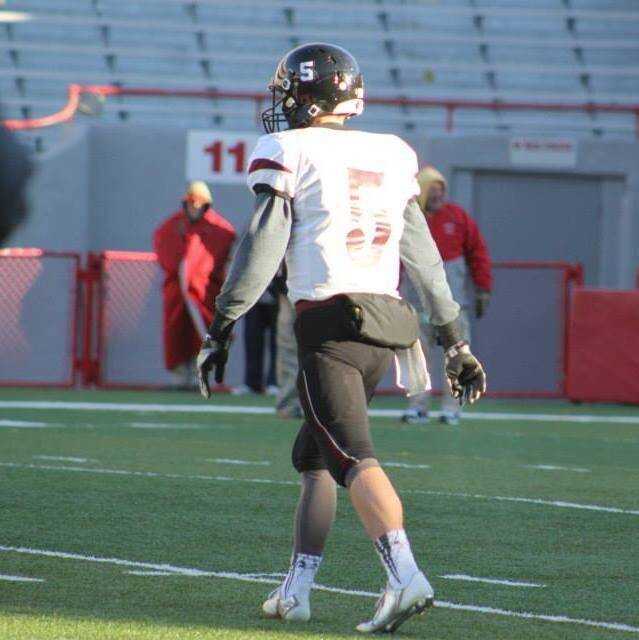 The setting was perfect for playoff football in Shickley. Sparkling new bleachers, a huge 2nd press box and even picnic tables. The picnic scene must seemed so realistic, the BDS football team made it look like a walk in the park for most of the 1st half, sprinting out to a 32-0 lead before Creighton could even catch their breath.

But a funny thing happened on the way to the halftime break.

The Bulldogs scored twice in a 47 second span before halftime, fought back to within a touchdown with 4 minutes left in the game, but ended their season by falling painfully short, as BDS reached deep down with their own rally to punch a repeat ticket to the Class D-1 State Finals with a courageous 46-28 win over Creighton.

The BDS Eagles not only scored on their 1st play from scrimmage, but reached the end zone on their first 5 possessions, sprinting out to a 32-0 lead. That's what the scoreboard read in Shickley with 7:20 left in 2nd quarter. Meanwhile, the BDS defense was stuffing everything Creighton even thought about running, whether it be on the ground or through the air.

It seemed like every time quarterback Ryan Neumann, a converted RB, dropped back to pass, All-State linebackers Ben Elznic or Sam Christensen turned him into their sack lunches. It wasn't until BDS built an 18-0 lead that the Bulldogs could muster a 1st down. But that even ended with a punt once Creighton advanced to the Eagle 37.

After forcing the 11-0 Bulldogs to a 3 and out, it took only one play for Bruning-Davenport-Shickley to hit the board. 6-2, 195 pound Ben Elznic slipped past the Creighton defense, who was playing the run. BDS quarterback Riley Tegtmeier then nailed him on the run with a 46 yard TD pass and the 1st half route was on. It took only 3 minutes, 17 seconds for BDS to notch their 2nd score of the opening period. This time Tegtmeier found his other linebacker/receiver Sam Christensen for a 7 yard score. Elznic had a 14 yards reception on the 42 yard drive.

On the Eagles next drive, a 44 yard possession, Tegtmeier found quick-as-a-wink running back Kale Kleinschmidt for a 24 yard reception. Kleinschmidt eventually took it in from the one yard line for the 3rd BDS score of the opening stanza.

Less than 3 minutes later after Creighton recorded their initial 1st down, then punted it away, Kleinschmidt flashed some of his speed on the ensuing 2nd down and 1 play. The 160 pound junior slashed off right tackle, made a cut, then raced 37 yards for the Eagles 4th TD of the opening quarter. With 1:06 left in that 1st quarter, it was already 24-0.

BDS struck paydirt again on their 5th possession when Riley Tegtmeier hit Kleinschmidt with a 22 yard frozen rope bullet TD pass. Tegtmeier found Sam Christensen for the Eagles first PAT of the afternoon and it was 32-0.

Not only did I wonder what was happening, but I could imagine what the Creighton players had going through their minds after making the long trip for this semifinal matchup? My question was answered when veteran head coach Gene Suhr convinced his defense they could make some stops. What also had transpired was that BDS linebacker Ben Elznic had been off the playing field for a time. It appeared to me he apparently injured a shoulder after catching a pass. Suhr must have noticed Elznic's absence at LB as well.

Creighton did gain some good field position at the BDS 39 with 3:26 left in the half. Brook Baller, Creighton's playoff rushing leader, finally had an 8 yard gain and things looked promising. But once again, the swarming BDS defense sacked Neumann for a 9 yard loss, then a motion penalty set the Bulldogs back even more, setting up a 3rd and 26 for the 'Dogs at their own 35.

Suhr saw something, sent in the play, and next thing you know, Brook Baller was behind the BDS secondary hauling in a 45 yard TD pass. BANG! Creighton was finally on the board.

On the ensuing kickoff, the Bulldogs recovered a bobbled kick return and were back in business at the BDS 22. Disaster struck on a 2nd down pass play when Creighton QB Ryan Neumann was rushed and tossed a Tommy Armstrong type pass into an empty area. Intentional grounding. !5 yard penalty. Loss of down. Something they could ill afford with :32 ticks til halftime.

Suhr calls time out. Neumann then takes the snap, rolls to his right and finds senior SE Brandon Borgmann for a 22 yard TD strike. Neumann then runs it in for the 2 point conversion and we have new ball game at 32-14.

Tell you what, Creighton came out 2nd half with a fire in their eyes, especially on offense. After being held to a minus 4 yards rushing in the first half, the Bulldogs turned to grind it out football with powerful FB Lane Walton leading the charge. Walton, who ran for 990 yards entering the contest, ripped off gains of 7 and 11 yards to begin the 3rd quarter.

I thought the defining moment of the 3rd quarter may have come at the end of Creighton's opening drive. The 'Dogs began with the ball at their own 27 and moved it all the way to the BDS 4 yard line after eating the clock all the way down to the 6:40 mark. The time consuming drive, coupled with the fact Elznic was down to tackling with one arm and Tegtmeier was cramping every other play, was down to a 4th and goal at the Eagle 4. An incomplete pass made the long drive a fizzle.

Creighton's defense stuffed BDs to a 3 and out, then mounted a 2nd long drive, this time a 43 yarder, culminating with a Ryan Neumann 5 yard TD blast.

Now it was 32-20, thirty four seconds left in the 3rd quarter. BDS had touched the ball for 3 plays in that 3rd frame.

The teams battled back and forth in the final quarter, but the both the fired up Creighton defense and their banged up BDS counterparts refused to break. That would change after Lane Walton put some serious leg into a punt, sailing it 45 yards for a touchback. The Bulldogs took advantage of BDS being pinned back, forced a 3 and out, and took over after a short punt ended up at the Eagle 39.

Now the Creighton faithful was making some noise. The Bulldogs ran an efficient clock, consuming only 1:47 off a 4th quarter clock that read 5:55 when the drive started. Neumann once again found Brandon Borgmann, who made an NFL highlight reel like catch for a sparkling 10 yard TD. BANG! Hard running Lane Walton bowled over BDS defenders for the double extra point all of a sudden the Bulldogs were only down 32-28 with 4:08 left in the semifinal clash.

Was Creighton going to make a Burwell type comeback? Remember the Longhorns being down to Amherst 41-20, then rallying for a 64-41 victory just a week ago?

Creighton's ensuing kickoff was returned by Kleinschmidt to the 23 yard line and we were ready to rock and roll. Here is what transpired. Now remember, Kale Kleinschmidt was playing quarterback part of the time because of Tegtmeier's cramps.

2nd - Tegtmeier sprints for a 10 yard gain, his longest run of the day.

2nd down - Kleinschmidt for 2

Ben Elznic, one functional arm and all, gets past his defender and runs under a Riley Tegtmeier pass at the Creighton 20, then sprints in for the 46 yard, backbreaking touchdown. 2:57 left.

Creighton still had time, but a kick return was not in the cards, considering BDS kick-off man, 210 pound sophomore Holden Stengel had put nearly every previous kick in the Bulldog end zone for a touchback. This one as no different.

The Bulldogs took the ball on their own 15 with 2:50 remaining but BDS, whose calling card was defense all season long, regained its composure and forced a punt when Sam Christensen broke through and sacked Riley Neumann on 3rd and 10.

The BDS offense took the field with 2:06 left and Creighton desperately needed a stop. Deflated by the previous touchdown, a slashing Kale Kleinschmidt swept to his right and like a flash, was gone for a 44 yard, Finals Ticket Punching touchdown run.

Playoff football should be this way. It's a shame there has to be a loser sometimes. But in this case, unbeaten Creighton made a valiant comeback that just fell short. BDS, unbeaten as well, was on a season long mission to return to a Memorial Stadium site where they lost a 52-6 Class D-1 Finals decision to a might good Hemingford team.

For BDS, it was Kale Kleinschmidt pacing the ground attack with 128 yards on 17 touches and 3 total TDs. QB Riley Tegtmeier added 40 yards on 13 carries and a short TD run. In the passing department, Tegtmeier was a sparkler, hitting 10 of 15 tosses for a whopping 223 yards and 4 touchdowns. Two of those scoring passes were to Ben Elznic, who caught 5 total passes for 146 yards.

For visiting Creighton, who concludes a fine season at 11-1, it was fullback Lane Walton who led the rushing game with 86 yards on 16 carries. 83 of those yards and 14 of those touches came in the 2nd half. Walton finishes his senior season with 1,076 yards rushing.

QB Ryan Neumann, the RB who took over for injured quarterback Austin Diedrichsen, added 61 yards on 22 carries. Neumann, under heavy pressure all afternoon, completed 11 of 24 passes for 159 yards and 3 TDs. Brandon Borgmann grabbed 6 of Neumann's passes for 84 yards and 2 TDs. Brook Baller had 3 receptions for 66 yards and a score.

Diedrichsen, by the way, went down in the Plainview game October 2nd. I'm wondering if he may not have been hurt in the 3rd game of the season because after completing 24 of 30 passes for 420 yards and 7 TDs his 1st 2 games, he only attempted 20 the next 3 outings. What could have been?