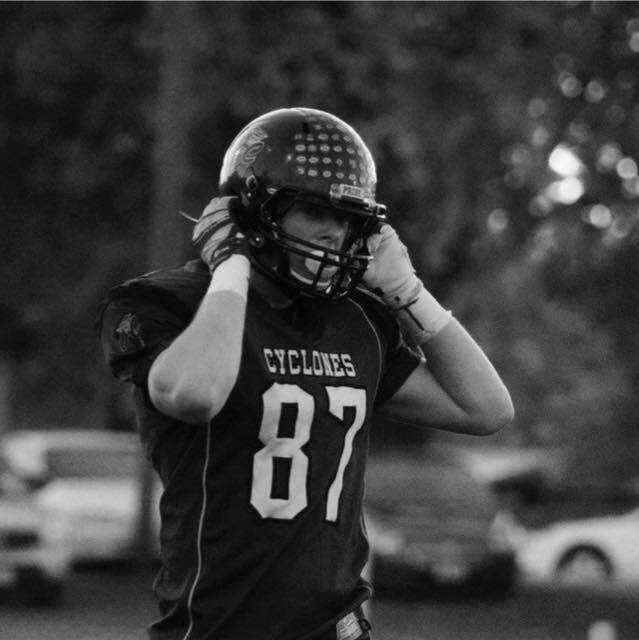 Humphrey - Humphrey St. Francis used a dominating, ball control offense to dominate Falls City City Sacred Heart Tuesday afternoon, 46-14. Propelled by the running of 160 pound senior back, Kyle Wemhoff, the Flyers basically played keepaway from Sacred Heart for most of the football game. The slippery, elusive Wemhoff carried the ball 48 times for 237 yards and scored on touchdown runs of 5 and 48 yards.

The dominating line blocking of the St. Francis O-Line of Carson Weidner, Cole Wemhoff, Nolan Kosch, Noah McPhillips and Kyle Brockhaus cleared the way for the slightly built, but solid Wemhoff, who twisted, turned, churned, finding his way through the smallest of openings. The stage may have been set when Wemhoff began the contest with 6 straight carries.

By halftime, Kyle Wemhoff had already racked up 30 carries for 93 yards, but the Flyers still owned only a 16-6 lead. St. Francis quarterback Damien Baumgart threw only 3 passes the entire game, and all 3 were hauled in by big Jon Korth, the last one going for a 27 yard touchdown when the Irish played the run.

The Flyers had shut down the Sacred Heart running game to a meager 23 yards before freshman Drew Bippes broke a 60 yard run with under 2 minutes to go in the game. Irish QB Bailey Witt took to the air 23 times during the afternoon contest, completing 13 of those for 137 yards but suffered 2 interceptions, both by St. Francis QB Damien Baumgart.

Elgin - Down 22-18 entering the 4th quarter, Clearwater/Orchard mixed the run and the pass to reel off 24 unanswered points and post a 42-28 come from behind victory over Elgin Public/Pope John. On a perfect windless evening with spectators lining both sides of the football field, the 8-3 Cyclones rode the fierce defensive play of 6-8 Andy Kerkman, and hard-hitting Alex Olivan, plus the pinpoint passing of senior QB Zach Martin to advance to the semifinals.

The 42-28 win avenged a regular season 36-14 loss to the Wolfpack, a game that saw Elgin/Pope John running back Andrew Fangman shred the Clearwater/Orchard "D" for 164 yards and 5 touchdowns. On this night, however, Fangman, the state's leading rusher, would score only twice.

Elgin/Pope John owned leads of 8-6, 16-12, and 22-18 after the first 3 breaks, but the Wolfpack defense just couldn't seem to contain senior RB Blake Kester, the multi-talented Kirkman, or the rifle arm of Zach Martin.

Clearwater/Orchard actually took the lead at the 7:31 mark of the 2nd quarter when Martin found a streaking Kester for a sweet 29 yard scoring strike. The Cyclones owned a 12-8 lead at the time. But it took less than a minute for Elgin/Pope John to answer back and regain the lead. Senior Seth Schumacher spotted classmate Kyle Kallhoff and connected for a 51 yard scoring strike to give the Wolfpack a 16-12 lead.

Things continued to look promising on the Wolfpack's opening drive of the second half. Andrew Fangman, who had 59 yards on 18 carries the 1st half, ran hard, ripping off gains of 8, 5, 5, 6, and finally a 4 yard TD run to pad Elgin/Pope John's lead to 22-12. The Cyclone's Kester would answer 4 minutes later with his 2nd touchdown of the night, an 8 yarder. That pulled the visitors to with 22-18 after 3 quarters.

The 4th and "money" quarter was all Clearwater/Orchard, except for one play. The floodgates may have opened when Elgin/Pope John decided to try and execute a fake punt on a 4th and 2 from their own 15. The pass by punter/QB Seth Schumacher fell incomplete. The Cyclones took over at the 15 and 3 plays later Blake Kester ran it in the end zone from the 5 yards out. A Double PAT run by linebacker Alex Olivan gave Clearwater/Orchard a 26-22 lead, a lead they would never relinquish.

Five minutes 25 seconds later, the Cyclones appeared to apply the back-breaker when Zach Martin found big Andrew Kerkman racing down the Clearwater/Orchard sideline. Martin then nailed the 2 time All-State basketball player with a 57 yard TD pass. Kerkman merely plowed over the last two Wolfpack defenders for the score. With 6:10 left in the game, Clearwater/Orchard had stretched their lead to 34-22.

Elgin/Pope John was not finished though. 1:38 later, Seth Schumacher hit Kyle Kallhoff, who took his 2nd scoring reception of the night 10 yards to score. The PAT run failed, but the Wolfpack was still within 34-28 with plenty of time, 4:32, to score.

But Clearwater/Orchard put the crushing blow on Elgin Public/Pope John on the ensuing drive. The Cyclones recovered the Wolfpack's onside kick and proceeded to move it 39 yards in 6 plays, culminating with Blake Kester's 11 yard touchdown dash. Linebacker Alex Olivan pulled up on the point after attempt and fired a perfectly executed jump pass to the 6-8 Kerkman for the 2 point conversion. That seemed to seal things for the Cyclones, who led 42-28 at that point with 1:56 remaining in the game.

Things got interesting with 41 seconds left in the game, though. Zach Martin floated a pass in the flat to Andrew Fangman, who then pulled off a highlight reel 41 yard touchdown run. But the play was ruled dead when one of the officials inadvertently blew his whistle. After a long discussion, the officials put 37 seconds back on the clock (???????). The Wolfpack failed to score and the ballgame was in the books.

For Clearwater/Orchard, who improved to 8-3 on the year, Quarterback Zach Martin ended the night by connecting on 9 of 17 passes for 162 yards and 3 touchdowns. Tight End Andy Kerkman grabbed 6 of those throws for 118 yards and 2 TDs. Blake Kester led the ground attack for the Cyclones with 89 yards on 14 touches and 3 TDs. Kester also caught 3 passes for 37 yards and a score.

On defense, big 190 pound Derik Allen pestered Seth Schumacher all night, while recorded 21 tackles and 3 sacks. Andy Kerkman followed with 13 stops and 3 sacks as well. Brutal tackling Alex Olivan chipped in with 11 tackles, 6 of which were solos.

For Elgin Public/Pope John, the fantastic Andrew Fangman closed out his splendid career with a 148 yards on 36 carry evening. That gives Fangman 2,439 yards in 2015 with 39 touchdowns. The 178 pound senior ends his Wolfpack career with 2,988 yards and 59 touchdowns.

Seth Schumacher completed 17 of 27 passes for 220 yards and 2 TDs for the Wolfpack. Kyle Kallhoff led the receiving corps with 7 receptions for 107 yards and 2 scores. Chad Bode and Scott Moser each had 9 tackles for the Wolfpack, who conclude the 2015 season with a fine 8-3 mark.

Clearwater/Orchard advances to Monday's Class D-1 semifinal round and will travel to Burwell, who stormed back to beat a strong Amherst squad, 64-41.