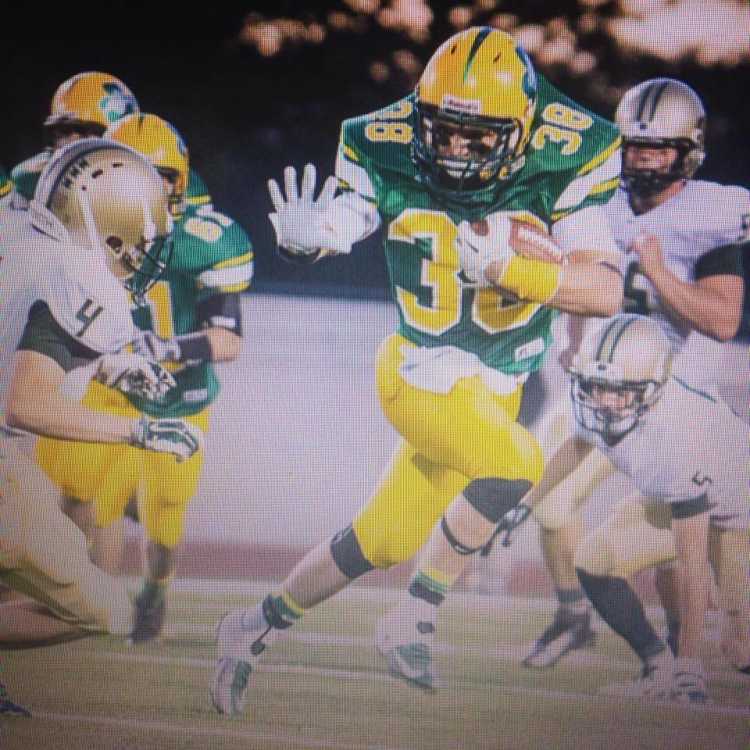 Columbus Scotus FB/LB, Jake Bos (#38) rips off another big gain. The Shamrock senior is a sure-fire All-State selection in 2015.

Whatever game plan Scotus head coach Tyler Linder and his staff formulated to combat a terrific Ashland-Greenwood team must have been a dandy. The Shamrock defense put the halts to one of the best running backs in the state while the offense opened some huge holes for Jake Bos and Marcus Dodson. The result was a resounding 36-7 win over an 8-2 Ashland-Greenwood team that has advanced to the last two Class C-1 State Championship games.

On a dead still, picture perfect, crisp autumn football evening, the Shamrocks took one more step on their magical journey to Lincoln. There wasn't much that went the wrong way for this group of 'Rocks, determined to make amends for a heartbreaking loss in this same quarterfinal round a year ago.

Scotus actually started the game with a 3 and out after beginning with excellent field position at their own 46. It was Ashland-Greenwood that mixed the run and pass well enough on their opening drive to move from their own 13 to the Shamrock 39. Scotus linebacker Evan Chohon put the stops on that baby with a 3rd down and 13 sack on Bluejay quarterback, Aric Kasuske. Nebraska football recruit, Ben Stille then pinned Scotus deep on their own end with a nice pooch punt to the 'Rocks 8 yard line.

An illegal substitution penalty pushed the Scotus back to their own 4 yard line with 96 yards and a good Bluejay defense staring them in the face. The very next play, although early in the contest, may have been the defining moment in the game.

Fullback Jake Bos took a quick handoff from QB Brady Pryzmus, burst through a king-sized hole, then turned on the jets. Only a flying tackle on the Ashland-Greenwood 29 saved a touchdown. Marcus Dodson then blasted through a similar opening for 8 more yards to the Ashland-Greenwood 21. After the Bluejay "D" spilled Pryzmus for a 2 yard loss, Dodson ran for 4 yards, Brady Harrington zipped for 12 more to the Bluejay 7 yard line, then it was Jake Bos blasting the remaining 7 yards for the score. Harrington's PAT kick was blocked and Scotus had a 6-0 lead with 1:55 left in the first.

The Shamrocks would add another touchdown with 22 seconds left in the opening quarter. After pinning the Bluejays deep in the shadow of their own goal post, Scotus rushed punter Ben Stille, forcing a short boot, followed by a good return to the Bluejay 34.

Jake "The Boss" Bos ripped off a 16 yard gain on the first play, then speedy Marcus Dodson finished the 2 play drive off with a slick, blink-of-an-eye 18 yard TD sprint. The PAT kick failed again, but with 22 ticks left in the 1st, Scotus had a 12-0 advantage.

Ashland-Greenwood's defense clamped down on Scotus pretty well in the 2nd quarter. But following 16 yards on his first 4 carries, the raging Shamrock defense stifled 2 time All-State RB Trevor Nichelson, limiting him to a minus 4 yards on 4 touches the remainder of the 1st half.

Scotus did penetrate deep enough into Ashland-Greenwood territory in the 2nd quarter to allow Brady Harrington to kick a 28 yard field goal. The half would come to a close with the Shamrocks holding a 15-0 advantage over the twice State Runner-Up Bluejays.

The Shamrocks wasted little time scoring to open the 2nd half. The powerful Scotus line shook Jake Bos loose for a 64 yard touchdown run on the 2nd play from scrimmage on Scotus opening drive of that 3rd quarter. Harrington nailed his 1st PAT kick of the night, making it 22-0 with 7:57 left in the 3rd.

Evan Chohon recorded another sack on Bluejay QB Aric Kasuske, then later in the drive, Shamrock junior defensive back Anthony Kosch picked off a Kauske pass, setting Scotus up near midfield. Speedy FB Marcus Dodson then promptly broke through the Bluejay middle, sprinting 51 yards for a paralyzing score. So now, in a span of 1:50 seconds, the Rocks put two crippling, long touchdown runs on the board, staking the 8-1 Shamrocks to a 29-0 lead.

Less than 3 minutes into the 4th quarter, Jake Bos added another touchdown, a 7 yard scoring dash that included a flying leap over an Ashland-Greenwood defender. With 9:17 left in the game, the unimaginable running clock kicked in with the score reading Columbus Scotus 36-0 over Ashland-Greenwood.

The 36-7 win over Ashland-Greenwood propels Columbus Scotus (9-1) to a Class C-1 semifinal home matchup with undefeated Wilber-Clatonia (10-0) next Friday, November 13th. The Wolverines turned back Central City 41-34, with a late game winning drive in the back and forth contest

Scotus rushed for 299 yards in the contest, with fullback Jake Bos leading the way. Bos finished the evening with 200 yards on only 13 carries and three touchdowns. Marcus Dodson added 89 yards on 6 carries and 2 more scores. Shamrock quarterback Brady Pryzmus had to throw only 5 times on the night, connecting on three of those for 63 yards. One of those completions was a 50 yarder to fleet footed Brady Harrington.

For Ashland-Greenwood, it was a frustrating night for the marvelous Trevor Nichelson. The hard running junior ran 21 times for 34 yards and a TD. Unless my math is wrong, the Bluejays rushed for only 36 yards in the entire contest. A minus 18 yards rushing, primarily on sacks of QB Aric Kasuske, contributed to the negative yards.

Kasuske put the ball up in the still Pawnee Park air 28 times, completing 14 of those for 151 yards. Ben Stille caught 5 of Kasuske's aerials for 68 yards. The Bluejays close the 2015 season with an 8-3 record.