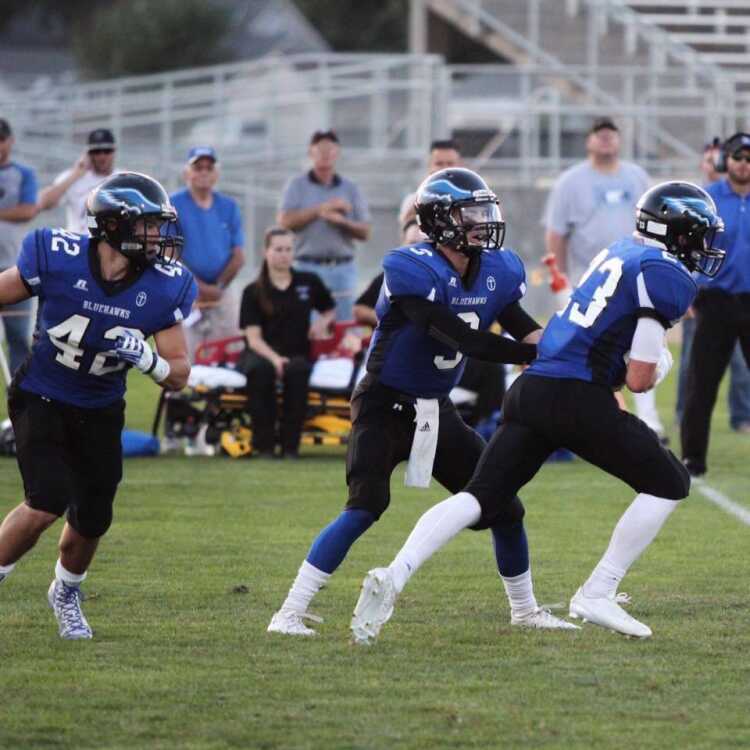 Hastings St. Cecilia quarterback, Grant Schmidt (#3) pulls the ball out and prepares for takeoff on the option play.

Rejoice all ye football faithful, for the Holy Season is here. For the common man, that means the high school playoffs are here. And this playoff season that can be a cruel as it can be joyous. A season of one and dones, do or dies. A time of lose, and tomorrow never arrives.

Yet, it can be so jubilant, so full highs, magnificent accomplishments and hopes of the ultimate crowning achievement.

It's also a rare time of year that both football and basketball coaches are both in heaven, although you may catch a fleeting glance at a hoops coach with his fingers crossed, praying that everybody planning to hit the hardwood this winter makes it through the Holy Season without injury.

Now we present the Heroes that stood out, or maybe even emerged during the 1st Round of the playoffs.

*Jordan Strong- Omaha North - Sophomore back carried the Viking offense with an unbelieveable 341 yards on 41 carries performance in Omaha North's 35-17 win over Grand Island. On a rainy night that favored the controlled, grind it out, punishing ground attack, the 225 Strong was the perfect game plan for the 2 time defending Class A Champions. The crunching one on one blocking scheme by the Viking "O"-Line opened running lanes for the powerful runner, who scored every single touchdown in North's victory.

Strong, whose brother is record setting I-Back Calvin Strong, scored on short blasts of 1, 6, and 1 yard, plus longer TD runs of 39 and 23 yards. Mr. Strong and his buddies just made a statement that Omaha North is not going down easy in these 2015 Class A playoffs. The Vikings will return home Friday to face 8-2 Omaha Westside (7:00)

*Gage Orton- Plattsmouth - Senior RB made life miserable for Bennington Friday. The 5-10, 185 pound senior carried 18 times for 210 yards and scored 2 second quarter touchdowns on runs of 18 and 2 yards in the 47-0 whitewashing of the Badgers. That raised his season rushing total to 1,486 yards (22 TDs) and also upped the Blue Devils record to a perfect 10-0 this season.

Two sweet things here. The win Friday was Plattsmouth's first playoff win in 39 years, the last one coming in 1979 when the Blue Devils beat Gothenburg and Columbus Lakeview, before eventually losing the State Championship by a single point (20-19) to Norris. It is also extra special for Orton, whose season was cut short a year ago after an injury in the Gretna game. Plattsmouth will face McCook, a 14-6 winner over Beatrice, at home Friday. Game time is 6 PM.

*Tyler Holz- Bloomfield - I wonder if Nebraska City Lourdes ever knew what hit them when Holz rolled into town last Thursday? The 205 pound senior took the ball 38 times, rushing for a gargantuan 381 yards and 6 touchdowns in the Bees 80-48 win. The deal with Holz is this. The guy is listed as a fullback. Through the first 7 regular season games, Tyler rushed for 750 yards and 8 TDs, a very good total for a FB. Now either Holz switched to a halfback position or something magical happened in the regular season finale 58-46 victory over Plainview.

Tyler Holz carried the ball 44 times for 367 yards and 7 touchdowns. So, the kid rushes for 750 yards the first 7 games of the season, then literally explodes for 748 yards on 82 carries and 13 TDs the past two games. Whatever took place, I can assure you Bloomfield is a much better team for it. So, all of a sudden, Tyler has 1,495 yards and 21 touchdowns to carry into the Quarterfinal round of the Class D-1 playoffs. The 6-3 Bees will try and sting rough, tough 9-0 Guardian Angels CC Wednesday in a 6:00 kickoff in Bloomfield.

*Mark Thurston and Corey Conway- Silver Lake - The Mustangs season came down to one last play Friday in their playoff game at Spalding Academy. Let's reset that last play for you. Spalding Academy is knocking at touchdown's door at the Silver Lake 11 yard line. Good news for the Shamrocks is that it's 1st down. Bad news is, there are only 6 seconds left in the old ball game and they are out of time outs. Silver Lake has a 48-44 lead. The winner advances to the semifinals of 6-Man Football, the loser packs it up and gets ready for basketball.

Brock Leslie, the Shamrocks 1000 yard rusher should get the ball. He does, and sweeps to his right, a play that has worked all night. Corey Conway comes up and slows Leslie down, then sophomore Mark Thurston makes the game saving tackle.

There's a little more to it than just the one play, although if Conway and Thurston fail to make that play, it's hoops time for Silver Lake. Actually, Mark Thurston leads this team in tackles with 72. The sophomore also has an incredible 28 tackles behind the line. The Mustangs as a team, have 88. That's a ton of "tackles for loss" in any form of football. Silver Lake will host defending 6-Man champion Riverside this Friday. Game time is 6:00.

*Noah Vedral- Wahoo Neumann - Junior quarterback's 93 yard run on the game's first play from scrimmage may have been the difference in the Cavalier's 26-19 win over Ogallala. Vedral ended the night with 164 yards on 20 carries and 3 touchdowns in the win. The star QB also completed 15 of his 20 throws for 157 yards. Vedral has posted gaudy averages the past 2 games for Neumann. Noah has rushed the ball 22 times, but averaged 12.6 a pop. He runs the dangerous option play soooo well. Vedral has thrown 35 times in those previous 2 contests, connecting on 25 of those tosses for a 70% plus completion rate. Vedral is a big time player who comes up big time in big games, whether it be on the gridiron or the hardwoods.

That sets up a rematch against Norfolk Catholic this Friday, but this time it's at Neumann. Norfolk Catholic won the regular season game 30-23. Neumann took an 8-0 1st quarter lead in that one. Catholic then stormed back to go up 30-8 after three stanzas, then had to hold on at the end to dispatch the Cavs. Better fasten your seatbelts for this baby.

*Nicolas Westkamp - York - Sophomore QB came up huge in his first start of the season for the Dukes. York starting quarterback Landon Kaliff had to sit out the start of the contest with a sore hamstring, leading to Westkamp's starting nod in the 1st Round of the Class B playoffs against Omaha Roncalli. Complicating the matter was the fact that Roncalli's defense is one of the meanest and stingiest in all of Class B.

All Nicholas did was lead his team to a 21-0 halftime advantage with a TD toss to John Erwin included in the deal. Westkamp would end the night completing 8 of his 14 passes for 128 yards and a touchdown. Kaliff did finally come in during the 3rd quarter and the early part of the 4th to help stake York to an even bigger lead (35-0), but Westkamp proved he could play under pressure in the Dukes 35-7 win and actually finished the game.

York will take the quarterfinal trip to Elkhorn Stadium to meet up with #3 seed Elkhorn South. Game time is 6:00. The Storm sent Sidney back to the Panhandle with a 70-20 defeat in their 1st Round game, and that was minus Moses Bryant.

Preston Schnitzler- Kenesaw - Quarterback ransacked the Giltner defense for 196 yards on 18 carries and 6 touchdowns in the Blue Devil's 81-6 thrashing of the Hornets. That was all in the 1st half.

Schnitzler, who has run for 1,383 yards and 32 TDs in only 7 outings, scored on runs of 12, 1, 6, 6, 70 and 3 yards in the romp. That sets up a sweet rematch with Exeter-Milligan on Wednesday. Kenesaw lost that season opening tilt to Exeter-Milligan 46-40 in overtime despite the fact Preston Schnitzler going down in the 3rd quarter. Schnitzler would end up missing the next game against tough Lawrence-Nelson, a 20-6 loss for the Blue Devils.

The quarterfinal game will be in Milligan on Wednesday with a 6:00 kickoff.

*Triston Fairchild- Papillion LaVista South - Bolted for 179 yards on 35 carries in the Titan's 56-21 payback win over Creighton Prep. Fairchild ran for 5 TDs in the big win and reached the end zone with runs of 2, 85, 2, 6, and 4 yards. Just a week earlier, the Junior Jays edged Papio South 13-12, but the running of Fairchild, who has 1,305 yards this season, and the added yardage of fullback Brian Lapke (133-9 carries) turned the tables on Prep. The Titans will travel to #2 seed Millard West this Friday to take on the 10-0 Wildcats in a 7:00 game at Buell Stadium.

*Grant Schmidt- Hastings St. Cecilia - Slick senior quarterback stymied Tri-County with his 3 touchdown passes and 2 rushing scores. Despite the steady downpour, Schmidt took snaps from the shotgun, completing 7 of 8 passes, three of which were touchdowns. The 6-2, 180 signal caller fired 2 scoring tosses in the first quarter, one a 26 yarder to Hunter Fischer, the other a 63 yard bomb to sprinter Dayton Sealey. Grant also located big Zach Kitten for a 24 yard touchdown in the 3rd quarter. Schmidt also hit paydirt on a couple of 1 yard plunges.

Hunter Fischer also scored on 56 yard run for the Bluehawks, who scored on their 1st 7 possessions against Tri-County. St. Cecilia (10-0) will host a 9-1 Yutan team in a Friday quarterfinal 6:00 start. Man, Carl Tesmer's squad has a ton of weapons and we haven't even talked about the defense yet.

*Brayton Hailey- Elkhorn South - Yet another player stepping up when it matters most. Hailey, a RB that normally gets around 5 touches a game, stepped in for an injured Moses Bryant against Sidney and rushed for 153 yards on 16 carries a 4 touchdowns in the 70-20 route. Hailey, a 190 pound junior, scored TDs from 13, 4, 10, and 41 yards out in the 1st Round win for the Storm. Elkhorn South hosts 9-1 York Friday.

What is ever crazier about this dude is that he played in the line both his freshman and sophomore seasons. You can truthfully say that Josh is a Man for All Positions on the gridiron after seeing his 928 yards rushing this year. So, now High Plains will take a trip to Dwight to face unbeaten East Butler on Wednesday at 6:00. DeMers, who is also an all-district linebacker, will face the task of stopping East Butler's dual-threat quarterback Skyler Ratkovec.

*Jakob Andreasen- Lincoln Pius X - The rising stars kept coming and kept surfacing in the playoffs last week. Andreasen, who normally plays fullback, was pressed into service when starting I-Back, Brock Wordekemper came down with a terrific pre-game migraine headache. Andreasen carried the ball 28 times, the Thunderbolt offensive line opened the running lanes, and the 195 pounder blasted his way to 183 yards and a critical score in the Pius 14-0 win over Grand Island Northwest. The rain soaked, muddy conditions suited Andreasen and his Bolt buddies perfectly and thus, Pius advances to the quarterfinals.

The Thunderbolts will get the rematch they wanted with Omaha Skutt, the #2 seed. The Skyhawks will visit Aldrich Field for the Friday 7:00 matchup with Lincoln Pius X.

*Trevor Nichelson- Ashland-Greenwood - Another normal day on the gridiron for the outstanding Nichelson. Actually and ironically, it was Trevor's lowest rushing total of the year, but 20 carries for 145 yards and a TD is normally a nice outing for any other runner. The 145 yard night was sufficient enough to lift the Bluejays to a 42-18 win over Chase County and propel them to their 3rd straight quarterfinals appearance in the Class C-1 playoffs.

That brings Trevor's season rushing total to 2,107 yards and 27 touchdowns in 2015. The heralded junior, playing in his thirty eighth high school football game, has now run for 4,527 yards and scored 67 times in his career. Ashland-Greenwood now advances to the quarters and will face a road game at 9-1 Columbus Scotus in a Friday, 7:00 matchup @ Pawnee Park. Folks, if I have to walk to Columbus in my underwear, I'm going to witness that baby! No sleep this week for me.