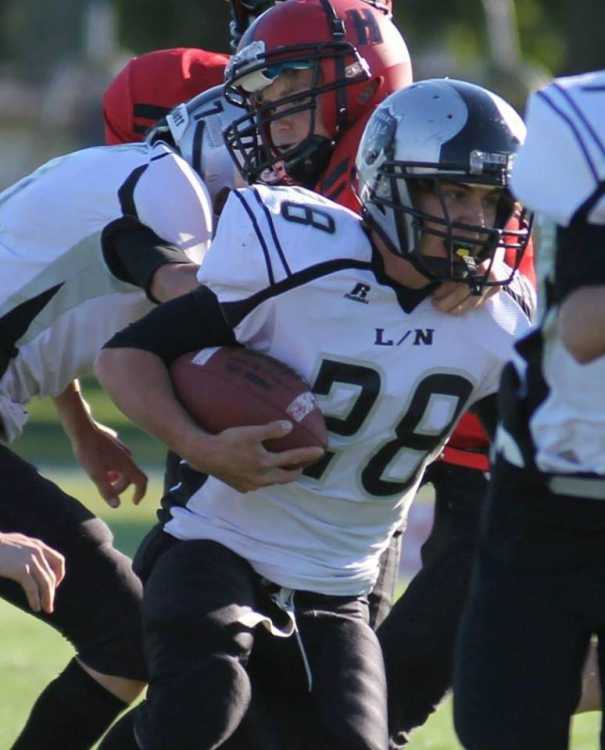 Gavyn Buschkoetter (#28) is a leader for Lawrence-Nelson on both sides of the ball.

On a crisp, calm, sun splashed afternoon in Lawrence, both defenses dominated the first half of play, but it was the hometown Raiders that turned back the Cougars twice in the red zone to preserve an 8-8 halftime deadlock.

Lawrence-Nelson coach Brian Blevins must had had a discussion with his offensive line during the break, because that group came out blasting holes for the hard running 160 pound Buschkoetter. The Raiders fashioned a 10 play, 42 yard scoring drive to open the 3rd quarter, Buschkoetter capping it off with a 3 yard TD run. Colton Biltoft found tall Brennan Miller for the double PAT, giving Lawrence-Nelson a 16-8 advantage. The Raiders would never relinquish that lead again.

Lyons-Decatur NE advanced the ball all the way into the Raider red zone on the ensuing drive, but Lawrence-Nelson stopped yet a 3rd drive at the Raider four yard line.

On the very next play, Gavyn Buschkoetter took a handoff into the heart of the Cougar line, appeared to be stopped, then pulled off a Tommy Fraiser type bowl game run, escaping from the pile to sprint 76 yards for a touchdown. That stretched the Raider lead to 24-8 with 5:08 left in the 3rd quarter.

Hard running Marcus Hegy, one of only 2 seniors on this Lyons-Decatur NE team, brought the visitors to within 10 points (24-14) with a one yard plunge with 2:09 remaining in that 3rd stanza. That was all the closer the Cougars would get.

Penalties and a swarming Lawrence-Nelson defense prevented Lyons-Decatur NE to draw any closer in the final quarter. Buschkoetter, Biltoft, and sophomore Kevin Schroer seemed to be everywhere, thwarting any running attempts by 1000 yard rushing quarterback Montana Riecken and Marcus Hegy.

Lawrence-Nelson would stretch the lead to 38-14 on touchdowns by Brennan Miller (12 yard pass from Biltoft) and Cody Byers (8 run). The Cougars added a late score with under a minute to play to make the final count, 38-22.

Gavyn Buschkoetter was the sparkler for the ground oriented Lawrence-Nelson (8-1) Raiders. The slippery, hard pounding junior ran for 195 yards on 27 carries and 3 TDs. He also was in on 21 tackles on defense. Raider QB Corbin Biltoft had to throw only 11 times, completing 7 for 60 yards and a score. Kevin Schroer led the rugged Raider defense with 23 stops.

For Lyons-Decatur Northeast, who finishes the season with a 5-4 mark, it was tough senior Marcus Hegy leading the ground game with 103 yards on 24 totes and a TD. Talented junior quarterback, and hard tackling Montana Riecken added 70 yards on 15 carries and was 7 of 12 passing for a nice 153 yards. Glue handed junior Jon Christensen caught four Riecken passes for 82 yards, and all 4 were tough, circus-type catches.

The Lyons-Decatur NE football team will merge with Bancroft-Rosalie next fall for football, so this may have been an emotional loss, not only for the playoff elimination, but for the simple fact these young men will not wear the Maroon/Gold and White uniforms of their school again.

Lawrence-Nelson advances to the quarterfinals of the D-2 playoffs and will pack the bags and prepare for the long journey to Wynot next Wednesday, November 4th. Game time has yet to be determined. The Wynot Blue Devils trounced Palmer 66-20 in their 1st Round game.