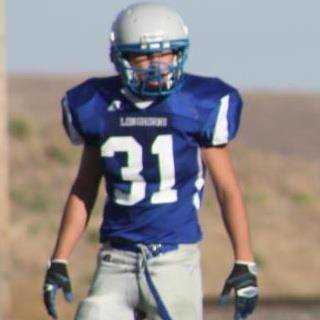 This is always a special week to spotlight high school football players. For so many, last Thursday or Friday may have been the final time they ever strapped on the shoulder pads and fastened the chin straps. I will make an attempt to salute as many as can be uncovered from Week 9. So many are deserving, including those in the trenches.

Gabe Haney-Hyannis - A week ago against Arthur County, the 5-11, 175 pound Longhorn star established three 6-Man Football records and tied another in a wild 61-58 victory over Arthur County. Gabe Haney, who lives in a small town just 10 miles west of Hyannis (Ashby), set the following records:

Gabe also tied a 6-Man record by rushing for 9 touchdowns in a single game.

In last Friday's 92-28 win over Minatare, Haney carried only 4 times, rushing for 108 yards. All 4 carries went for touchdowns. If you've ever seen Haney play, you know he could have rushed for 600 yards in that Minatare game, but that's not the way things work at Hyannis, or in Nebraska High School football for that matter. So, for the season, Gabe Haney has rushed for 1,872 yards and hasn't even carried the ball a hundred times. Gabe has toted the pigskin 98 times for an average of 19.1 yards a carry. I have seen this young man play live and he is the real deal. Speed, strength, power, cutting ability, and just plain football smart. Number 31 has scored 32 TDs in a span of 6 and a half games in 2015. Hyannis had one game cancelled and Sioux County was forced to throw in the towel at halftime because they were down to 5 players.

In Haney's 26 game career at Hyannis, he has run for 4,105 yards on 326 carries (12.6/carry) and scored 78 TDs. The 175 pounder has also 655 yards receiving in 3 seasons. Gabe has amassed 5,043 total yards, counting rushing, receiving, kick and punt returns. Haney has also made 277 tackles, intercepted 6 passes, recovered 12 fumbles, and blocked 4 field goal attempts. And in 26 games the sure-handed Hyannis star has lost only ONE fumble.

I am guessing that Mr Haney could start for any school in Western Nebraska, and that includes Scottsbluff or McCook. Trust me, the young man is just that talented. Now, Haney and his Longhorn teammates are looking toward the upcoming 6-Man state playoffs. Best of luck, Gabe.

*Logan Duryee-Omaha Westside - Came back strong against Fremont after missing last week's Omaha North game with an illness. Logan punished the Tiger defense with 263 yards on 23 carries and 4 TDs. Duryee's scores came from 17, 8, 64, and 11 yards away. In 8 regular season games, the 5-11, 175 pound senior has blasted his way for 1,438 yards and 16 touchdowns, with the majority of his carries going right into the heart of the defensive line. Westside will host Papillion LaVista Friday night in the 1st round of the Class A playoffs.

*Trevor Peterson-Lincoln Northeast - 6-0, 180 senior quarterback probably slept well Friday night. Peterson's Rockets and Omaha Burke hooked up in an 8-Man style shootout that ended up in a Burke 56-53 win. Trevor Peterson launched 48 passes in the game, completing 25 of them for 384 yards 3 TDs. Despite coming out on the short end of the score, Northeast outgained the Bulldogs 584 to 395 in total offense.

The last 5 games of the season, the super sharp Peterson has recorded four 300+ passing games, and 1,539 yards through the air. For the season, Trevor has been accurate on 193 of 331 passes for 2,442 yards and 20 touchdowns. Despite finishing the regular season with a 4-5 record, Lincoln Northeast made the Class A playoff field (#15 seed) and will travel to Buell Stadium Friday to meet Millard West in the late half of a double-header. Game time is 7:30. The Rockets are a dangerous draw.

*Preston Dibbern-Aurora - Junior running back played a huge role in the Huskies big win over York on a windy Friday night. Dibbern rushed for 176 yards on 29 carries, scoring on runs of 6, 66, and 6 yards, running more patiently in the 2nd half. Preston finishes the regular season with 989 yards, which helped the Huskies finish unbeaten in 2015. Aurora will enter the Class B playoffs as the #1 seed and will face 16th seeded Alliance (4-5) in a 2:00 matchup on Friday in Aurora. This junior RB really keeps defenses on their toes and is a great compliment to QB Grant Fox and the aerial game. This Aurora team is a state champion caliber football squad.

*Ryan McKeeman-Maxwell - McKeeman absolutely shredded Mullen's run defense by exploding for 429 yards on 52 carries and 7 touchdowns in Maxwell's 75-64 win. The 5-7, 150 pound senior blew up his season rushing total to 1,821 yards to go along with his 34 touchdowns. McKeeman leads Class D-2 in rushing, by the way. The Wildcats, who made it all the way to the SemiFinals a year ago, will enter this year's D-2 playoff field as the number 6 seed in that West Bracket. Maxwell will host a 6-2 Southwest team this Thursday at a time to be determined.

Tanner Lamoree-Cross County - The speedy 5-10, 150 pound junior needed just 8 carries to ramble for 291 yards and 5 touchdowns in the Cougar's playoff clinching 66-26 win over Harvard. Lamoree escaped to the end zone with TD runs of 70, 12, 67, 36, and 61 long distance yards. That elevates Tanner to 1,009 yards for the season and Cross County will use their team speed as they advance to the Class D-1, 8-Man playoffs. The Cougars come in as the #16 seed and will carry their 4-4 record to face powerful Bruning-Davenport-Shickley next Thursday on the road in that opening round.

*Tivon Phillips-Lincoln Northeast - 5-10, 172 pound junior RB had a career high 158 yards on 21 carries in the 56-53 loss to Omaha Burke. Phillips scored touchdowns with runs of 3, 21, and 9 yards in the Rocket loss and also lifted his season rushing total to 818 yards and 12 TDs. Phillips is also a dangerous receiver coming out of the backfield, having hauled in 33 passes for 346 yards and 4 more touchdowns. Tivon is also a deadly kick return man, averaging 24.6 yards every time he brings one downfield.

*Arnijae "JP" Ponder-Omaha Burke - The junior RB/MLB had his best rushing night of the season in the 'Dogs 56-53 win over Lincoln NE. Ponder ran for 164 yards on 28 touches, scoring TDs on 2, 4, and 2 yard runs. Ponder also had a Pick 6 in the Northeast game, bringing the interception back 38 yards for his 4th score of the victory. Ponder also in on 10 tackles on defense, bringing his season total to 77. Omaha Burke finishes the 2015 season with a 3-6 record, which was not good enough for a playoff berth. Ponder will be back for another go around in 2016.

*Tyler Oehlerking-Elmwood-Murdock - 5-10, 170 pound senior back ran for 169 big ones on just 12 carries in Elmwood-Murdocks 61-14 blasting of normally strong Freeman team. That raises Oehlerking's season ground total to 962 yards and 12 TDs. The Knights won their opening game 3-0 over Malcolm, then fell into a 3 game skid. The resilient Knights then collected themselves and proceeded to reel off 5 straight wins and finish the season at 6-3, vaulting them into the C-2 playoffs. Elmwood-Murdock will get in as the #16 seed and travel to top seeded Battle Creek this Friday for that 1st Round test.

*Luke Lallman-Millard West - 170 pound senior ran 13 times for 104 yards and 3 touchdowns in the regular season ending 38-13 victory over Lincoln Southeast. Lallman scored on runs of 22, 35, and 7 yards, pushing his 2015 rushing total to 738 yards and 14 TDs. Lallman is a deadly, and apparently sometimes unnoticed receiver out of the backfield for the top rated Wildcats too. Luke has been targeted only 13 times all year, but has pulled in 10 passes, scoring on SIX of those receptions. His 197 receiving yards yielded a 19.7 yards per catch average and also means Lallman scores 60% of the time he grabs one of QB Logan Anderjaska's throws. Hmmmmm.

Millard West will play in the nightcap at Buell Friday night in the 1st Round of the Class A playoffs, hosting that dangerous Lincoln Northeast team. Coach Kirk Peterson's boys are seeded Number 2 behind Bellevue West in the 2015 postseason Class A tilts .

*Nic Snodgrass-Louisville - 170 pound senior speed demon carried only 6 times, but still managed to rush for 201 yards and 3 touchdowns as the Lions roared to an easy 63-7 over Johnson County Central. Snodgrass broke scoring runs of 88 and 58 yards in the game and also ran under a 38 yard pass reception for his 3rd score. Teammate Josh Gray also had a big game, rushing for 153 yards on just 8 touches, hitting paydirt on runs of 79, 15, and 64 yards. Louisville played their 2nd consecutive season in the rugged Class C-1 ranks, finishing 3-6 in 2015. Playing teams like Boys Town, Milford-Dorchester, Syracuse and Falls City makes it tough to make the playoffs. Maybe next year, boys.

*Ian Urban-Omaha Skutt - Rugged 5-10, 200 pound senior did 132 yards worth of damage on just 9 carries in the Skyhawks 42-0 shutout of Elkhorn. Urban, who benches 325 pounds and is one tough motor scooter, scored on a 75 yard sprint against the Antlers, proving he can do the long-distance TD thing too. Ian, who is Skutt's primary running threat, has rushed for 933 yards and 16 TDs this fall and is a threat to catch a ball out of the backfield, although it hasn't happened a lot during the regular season.

Coach Tim Turman's defending Class B Champions enter next Friday's 1st Round of the Class B playoffs as the #2 seed, opposite #1 Aurora. The Skyhawks will host #15 Waverly, with kickoff slated for 7:00. This Skutt team lost only one time this fall, that being being 9 days ago to Elkhorn South (28-23).

*Jake Palensky-Raymond Central - Closed out his splendid career with a 195 yard, 23 carry performance in the Mustangs 36-0 blanking of Lincoln Lutheran. The powerful 200 pound back scored 4 touchdowns with runs of 5, 79, 5 and 20 yards. Jake also caught 4 passes in the win, good for 82 yards. Unofficially, Palensky finished the year with 1,338 yards rushing and 16 TDs. He also was in on 65 tackles from his LB slot. For his career, Jake Palensky rambled for an unofficial 3,833 yards, scored 41 TDs, and made 270 tackles. Saddening thing is big Jake never got to sparkle in a playoff game. Despite finishing 6-3 the past two seasons, Raymond Central just narrowly missed making the postseason fun both years.

*Connor Hudson-Plattsmouth - Picked up the slack in Plattsmouth's 28-7 win over Waverly when leading rusher Gage Orton left the game with an injury. Orton still managed 66 yards on 13 tries, but Hudson, only 5-5 and a140 pounds, took over and rushed for 172 huge yards on 15 touches, hitting paydirt on a 66 yard scamper. Hudson has only carried the football just 55 times this season, but has 539 yards and 7 TDs. Connor has also picked off 4 passes this fall from his DB position. The Blue Devils of Coach Bob Dzuris finished a perfect 9-0 this season and enter the Class B playoffs as the #4 seed. Plattsmouth will host #13 Bennington (5-4) Friday in Plattsmouth. Game time is 7:00.