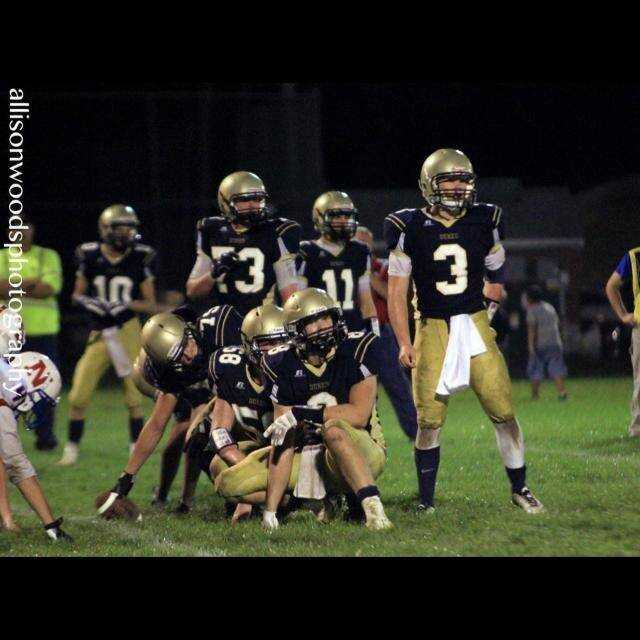 You just knew it had to end this way. Two undefeated teams, rivals, higher playoff seeding for the winner. Everyone anticipated a knock down, drag out, back and forth battle with a nail biting, blue knuckle climax. It may have ended that way, but it it sure didn't start the way we all expected. Matter of fact, at one point in the 4th quarter, many York fans may have had fleeting thoughts of packing it up and heading for the exits.

Just stay put for a spell and let me tell you the story about a game not soon to be forgotten.

The stands on both sides were jammed despite the sudden weather change. The cold west was wind howling, but so were the fans. For three quarters, it was the red clad home Aurora faithful kicking up their heels as their Huskies slapped 18 points on York before the Dukes knew what hit 'em. And the funny thing about it, Aurora's opening possession fizzled to a 3 and out deal. Here is what transpired after that.

Despite a 36 yard opening kickoff return to the Huskie 43 by Preston Dibbern, Aurora was forced to punt into the stiff west wind. Hunter Holliday nailed a goody, pinning York back on their own 10. On the 3rd play from scrimmage for the Dukes, Jackson Coffin coughed up the football trying to fight for extra yards. The Huskies recovered the fumble at the York 28 and three plays later, QB Grant Fox nailed 6'-8" tight end Austin Allen in the right corner of the end zone for an 8 yard touchdown. Just 4 minutes into the game, Aurora had a 6-0 lead.

The following York drive stalled on their own 27, after 3 downs netted a minus 3 yards. On 4th down, 175 pound senior Will Bolton "bolted" through to block Mayson Connor's punt and promptly took it in for a 12 yard touchdown. With 6:37 left in the 1st, Aurora now had a 12-0 lead.

Aurora would mount a good drive right before the quarter ended, but the York defense stiffened, halting the Aurora offensive push at the Duke 30 yard line.

Disaster struck York again with 5:15 left before halftime. Duke's QB Damon Kaliff rolled to his right and was flushed out of the pocket after leading his team deep into Huskie territory. The junior QB ran out of real estate running toward the Aurora sideline and lofted an ill advised pass that was picked off by Kyle Schmidt, who then sailed 75 yards for a touchdown. 18-0 Aurora......5:15 left in the 2nd.

The Huskies applied a paralyzing 1st half blow with a 57 yard drive, culminating with a 7 yard scoring run by hard running Preston Dibbern. 1:38 left in the 2nd quarter.....24-0 Aurora.

Glen Snodgrass and his Dukes didn't fold though. Just :38.9 seconds before halftime, Damon Kaliff spotted a streaking Nic Pettygrove and fired a bullseye pass, good for a 66 yard TD strike. Sophomore Jorre Luther booted the PAT through the uprights and York eased the first half shock a bit and headed to the locker room trailing 24-7.

Any hopes of York making quick amends to start the 2nd half came to a halt after the Dukes had driven to the Aurora 33 yard line. Damon Kaliff suffered his 2nd interception of the windy night right there when All-State WR/DB Todd Honas pirated his pass at the 20.

Just a few plays later, a more patient running Preston Dibbern, followed his blockers to a tee and sprinted 66 yards for another Aurora score. The Dibbern dagger was not what the gridiron doctor ordered for York. Now, with 5:52 left in the 3rd, the Huskies had a 30-7 lead on the Dukes. How much more adversity could a team like York take? Yes, they were 8-0, had one of the best coaches in the business at the controls, but how many more points could they surrender with a little more than 17 minutes left in the contest?

Your answer came on the following kickoff. Senior Cade Zumpfe returned the kick 39 yards to the Dukes 45 and it took only 5 plays for York to score. All-State wide receiver JJ Schulz line up in the Wildcat formation to take the final 2 snaps, JJ taking the 2nd direct snap across the goal line for a 13 yard TD. PAT good by Luther, York had pulled to within 30-14.

Things immediately looked more promising when York recovered the ensuing onside kick. Sophomore Simon Otte did the honors on the recovery. But the Aurora defense would do what they had done most of the night, stop the Dukes drive. This one fizzled at the Huskie 15 after Damon Kaliff had completed a 35 yard beauty of a pass to a well covered Jackson Coffin. But the outstanding Aurora "D" once again held, ending the York threat at the Huskie 15. The 3rd quarter ended with Aurora holding a commanding 30-14 lead.

The undefeated Aurora team then applied the apparent final blow when the Huskies drove 85 yards to score. The drive actually started with 1:51 left in the 3rd quarter. Preston Dibbern scored his 3rd TD of the night when the 170 pound junior took it in from 6 yards out. The big play on the drive was a 33 yard completion form Fox to Todd Honas. That play carried from the the York 41 to the 6.

With 8:00 right smack dab on the button left in the game, Aurora owned a 38-14 bulge. Nice try Dukes. Things just did not go right from the get-go. Pack it up, hit the practice field and get ready for the playoffs.....nice try, ya can't win 'em all.

*Following the Aurora score, the Dukes are held to a 3 and out. With a stronger wind at his back, York punter Mayson Conner launches a 52 yard cannon shot to the Aurora 6 yard line.

*3 plays later, Jackson Coffin steps in front of a Grant Fox pass at the 13 yard line, picks it and returns it to the Huskie 4.

*York tries an onside kick and executes it again with Nic Pettygrove recovering the prize.

*3:31 left in the game, Kowalski again bulls over, this time from the 3 yard line. Kaliff nails Simon Otte for the double PAT. Aurora 38, York 28.

*Aurora is driving, meanwhile forcing York to use it's final timeout. But the Dukes defense comes through, halting the Huskie drive at the York 34. Twenty six seconds left and no time outs for York.

*Damon Kaliff drops back with good protection and fires a pass intended for, you guessed it, JJ Schulz. Senior Evan Ronne steps in front of a well covered Schulz, picking off the pass like a defensive back, then cuts back and races 67 yards for a shocking touchdown. Jorre Luther boots the PAT into the Aurora night and York is within 38-35. Remember, the Dukes are out of time outs.

*Aurora finally pounces on the onside kick and yet another Aurora/York football Classic is in the books.

What can you say? Down 38-14 with a little over 5 minutes to go in the District 6 Championship game and nearly pull off the miracle of all miracles. That's why God created high school football folks. That's why teams like Aurora and York are good year in and year out. Aurora was the 38-35 winner on the scoreboard, but is there a true loser in this one?

York Coach Glen Snodgrass will tell you yes, I'm thinking. The winner of this game will apparently be placed in the bracket opposite Elkhorn South and Omaha Skutt. Aurora may get that advantage once we see the playoff parings later this morning. But mark my words, both of these Central Nebraska Class B powers are capable of winning it all. Both Aurora and York are Championship caliber football teams.

The Holy Season begins next week in high school football and when the smoke clears in Class B, the name Aurora or York just may appear on that State Championship program in Lincoln. Could that be where a memorable rematch between these two teams takes place? Could we be so fortunate?