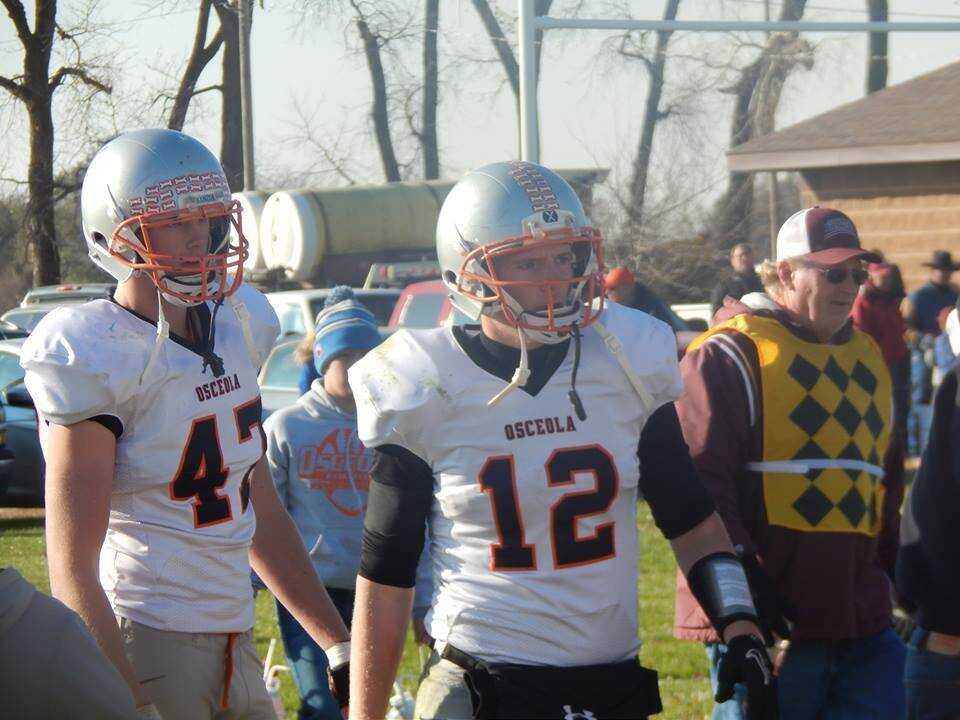 Luke Ericson of Osceola (#12) has been rock solid at QB for the Bulldogs.

District races are tightening up, the regular season is on the downhill slope, and teams are positioning themselves for the playoffs. It makes sense that the outstanding single game performances are increasing. If the remainder of the regular season games are as exciting as the Central City/Kearney Catholic thriller I saw Friday in Kearney, I may need some blood pressure medicine before it's all over.

Here is the first installment of Friday Night Prep Heroes. But in reality, isn't every player that works hard every practice and every Friday night, game in and game out, a real hero?

*Gage Orton-Plattsmouth - Orton was money in the Blue Devils incredible 50-49 double overtime victory over then 3rd rated Gretna. The 5-10, 185 pound senior ripped the Dragons for 246 yards on 32 carries and 5 touchdowns. Orton scored on runs of 1, 2, 9, 1, and 77 yards in the marathon. To date, Gage Orton has rushed for 946 yards on 127 totes (7.4) and crossed the goal line 15 times. By the way,the winning double extra point happened when QB Dawson Siemonsma found Zach Brant in the promised land with a bullet pass. The Devils also held Gretna ace RB Emmitt Knight to just 54 yards on 14 carries in the contest.

*Omaha Central Defense - How good can it get for the vaunted Eagle "D"? In last Friday's rivalry game with defending Class A Champion Omaha North, Central's defense stuffed the powerful Viking offense to a game total of just 66 yards. Sixty Six! They held Milton Sargbah to just 22 yards on 9 totes, and Jordan Strong to 9 carries for 26 yards. Meanwhile the offense overcame some fumbled snaps and rode RB James Jackson's 108-15 carries to the 9-0 win. Omaha Central's defense is now just one of only 3 teams in Class A allowing less than 200 yards Total Offense a game. Only Millard West and Norfolk are ahead of the 6-0 Eagles.

*Jacob Johnson-Fairbury - The exciting sophomore broke the thousand yard plateau with a 224 yards/5 touchdown explosion against Lincoln Lutheran. It took 27 carries for Johnson to hit those 224 big ones, and the touchdowns covered long distance jaunts of 58, 42, 21, 30, and 26 yards. Jacob has now rushed for 1,091 yards on 127 carries (8.6) and scored 16 TDs this fall. Already, in his short 15 game career, Johnson has run for 1,812 yards (6.6/carry), scored 33 touchdowns, made 121 tackles from his linebacker slot on defense. 19 of those stops were for losses.

*Garrett Leach-Sutton - 156 yards on 35 touches in the Mustangs 16-13 win over Doniphan-Trumbull. MaxPreps reports his season total as 1,165.

*Damian Backus-Boone Central-Newman Grove - 5-10, 160 pound senior enjoyed the finest rushing game of his career in the Cardinals impressive 49-28 win over a very salty Pierce football team. Backus, who ran for only 187 yards last season, and averaged 45 yard a contest this fall, bolted for 237 yards on only 15 carries (15.8/carry) and scored on runs of 24 and 45 yards in the big victory. His 78 yard run also set up the Cards final score of the game.

Boone rushed for a whopping 418 yards on 53 touches in the game, nearly 8 yards a pop. Sophomore Dylan Gentrup also emerged in this one, running for 114 yards on 12 carries. Hasn't Cardinals first year coach Mark Hudson done a marvelous job with this football team that suffered heavy graduation losses? No surprise to me, Hud is one of the best there is and an even more, a genuine leader of young men in life skills. Great man, just like his Superintendent, Cory Worrell.

*Sandhills-Thedford football team - Held Class D-2 #1 Anselmo-Merna to 177 total yards in an impressive 30-14 win Friday night in Merna. Not only that, the Knights trailed 8-0 at the half, and rode their new 2015 passing/running game to best the mighty Coyotes. Last season Sandhills-Thedford threw on an average of 25 times and game, while running the ball only 12 times. Quarterback sensation Jacey Nutter, who threw for 3,352 yards and 52 TDs the past two seasons, has started distributing the ball more and the result is bad news for opponents. Ask Anselmo-Merna. The Knights have already run the ball 10 more times than they did in all of 2014. Sandhills-Thedford's only loss this season was to a good Stuart team, 36-34.

Trust me, Gabe Haney could start for any team in the Panhandle, including Scottsbluff or North Platte.

*Dallas Yates-Auburn - Had 255 all purpose yards in the Bulldogs 47-22 win over Johnson County Central. Yates, a 6-0, 145 pound senior, returned an interception 85 yards for a score, took a kickoff back an identical 85 yards for another score, and caught TD passes of 54 and 13 yards from QB Skyler Hopper.

*Noah Urbanek-Kearney - Crippled Lincoln East with a 74 yard interception return for a touchdown when it counted in the Bearcats 25-14 win over the Spartans. Urbanek, just a junior, also shocked East by returning the 2nd half kickoff 85 yards for a score. Noah also ran 14 times for 31 yards and made 8 stops on defense. Terrific all-around utility player for Kearney High.

*Paul Muragizi-Lincoln High - Booted the winning 32 yard field goal with no time on the clock, to shock Lincoln SE 10-7. Honestly, I cannot recall the last time the Links beat Southeast. This baby had to be sweet.

*Jonah Bales-Grand Island Central Catholic - Rock solid, 165 pound sophomore stepped into the I-Back slot for the first time and responded with 71 yards on just 11 carries, plus a 3 yard TD run in the Crusaders 20-14 win over Minden. Bales played a ton on defense a year ago as a freshman, recording 25 tackles. Jonah already has 34 stops in 2015, three of which were for losses. Future 1000 yard rusher. All-State kicker Bryce Sealock added field goals of 33 and 44 yards in the game.

*Riley Chapman and Cody Whitehead-Fillmore Central - In the Panthers 55-14 win over Thayer Central, Chapman rushed 19 times for 108 yards and scored 2 TDs (1, 12 yards). Whitehead was close behind with 102 yards on just 12 tries with touchdown runs of 16 and 17 yards. Next week the Fillmore defense will face the daunting task of trying to stop Tri-County's Cody Ensz, who has rambled for an mind-boggling 934 yards the past 3 weeks.