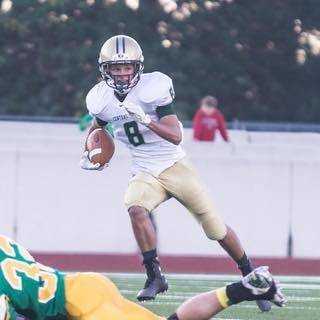 The Central City Bison survived, and responded to nearly every challenge Kearney Catholic threw their way Friday night. Every imaginable challenge. Down 14-0 in the first quarter, the Bison survived a third deep threat by Kearney Catholic, made some timely plays on defense, and simply kept fighting back countless times the rest of the way.

It was the same defense that surrendered 78 points in a two week span earlier in the season, but this time it was a 11 man gang of defenders that made plays when it counted. The real Bison "D" surfaced again, thwarting a talent-rich Kearney Catholic offense time after time to come away with a heart pounding 20-17 C-1, District 6 victory.

This will go down in the Bison history books as a monumental 2015 season stepping stone if this football team keeps playing like they did Friday night at the home of the Stars.

It certainly wasn't the type of beginning you would have expected from Central City. All-State quarterback Mitch Carlson entered the game having thrown 41 touchdown passes the past 15 games, with only 11 picks. This season the senior sharpshooter was even better, posting 13 touchdowns with only one interception.

Things looked pretty promising for the Bison when WR/DB, Kordell Hamer pirated a Matt Masker aerial in the end zone, preventing an early score. But Kearney Catholic returned the favor almost immediately when Tyler Mestl picked off a Mitch Carlson pass, setting up a 1st and goal at the Central City 5 yard line. One play later, speedy Bryce James raced to paydirt and the Stars had a 7-0 lead with 8:40 left in the opening quarter.

Four minutes later, Stars defensive back Grant Buschkoetter picked off another Carlson pass deep in Bison territory, setting up a 1st and goal on the Central City 9. One play later, another speedy Kearney Catholic RB, John Baack, took it in from the 9 for another score. Talented kicker Grant Buschkoetter booted it through and the Stars sent shockwaves through the Bison faithful, leading 14-0 with 4:36 still left in the first frame. Two interceptions by Kearney Catholic converted to 14 points, and in a hurry.

After halting the Bison offense for the 5th time in the 1st quarter, Kearney Catholic took the ball from the Central City 45 following a Bison punt and drove it to the Red Zone and were ready to pounce again.

After Stars QB Matt Masker hit Bryce James with a 30 yard strike, the Central City defense stiffened and held at the 9 yard line. Carlson and the Bison offense took over the show and promptly drove 91 yards to score, a Carlson to Taylor Beck 17 yard TD pass doing the trick. Disaster averted, threat answered. With 8 minutes left in the 2nd, the Kearney Catholic lead was sliced in half, 14-7.

On the ensuing Stars possession, the Bison defense once again came alive, forcing and recovering a Bryce James fumble on the Kearney Catholic 37. Short field, plenty of time on the clock and Central City was in business again.

The celebration was short-lived, however, when 155 pound senior Jeremiah Dickenson was jolted after a nice pass reception, losing a fumble. Once again the Central City defense came through and the half ended with Kearney Catholic on top 14-7. Remember the name, Jeremiah Dickenson.

The Stars took the 2nd half kickoff and drove all the way to the Central City 30 yard line but the Bison defense stiffened yet again. Deadeye kicker Grant Buschkoetter then nailed a 40 yard field goal into the wind, giving the Stars a 17-7 lead.......6:03 left in the 3rd quarter.

Central City suffered another setback on the following possession when running back Taylor Beck was hit with a jarring tackle and lost a fumble.

Central City's defense held once again, forcing the Stars into a 23 yard Buschkoetter chip shot. The "chip shot" failed to materialize when the the Bison "D" applied the pressure, forcing a rare Buschkoetter miss.

With Central City taking over on their own 20 after the FG miss, the Mean-Green Magic Connection Machine came alive. On the very 1st play, Kearney Catholic defensive back John Baack crept up close to cover Bison wide receiver Brady Bamesberger. But instead of backing up to cover the All-State wide-out, Baack opted to blow by Bamesberger and rush quarterback Mitch Carlson, giving Bamesberger 12 yards of open space. The result.......a spectacular 85 yard game changing TD connection between Carlson and Bamesberger. The 2 point conversion try was stuffed by Kearney Catholic a yard short, and with 1:14 left in the 3rd, Central City was within 17-13.

On the following Kearney Catholic possession, the Central City defense put its signature stamp on this football game. Just a mere 27 ticks after the Carlson to Bamesberger shocker, Stars QB Masker dropped back to launch one of his quick-release, 1,001-1,002 passes. But this time, Jeremiah Dickenson made the perfect timing read, stepped in front of the intended receiver, and took the Pick Six 42 yards to the house.

With 26 seconds left in the 3rd quarter, it was now Central City 20-17 over Kearney Catholic.

The fired up Bison defense forced a three and out the next Stars possession and set themselves up with with good field position at the Kearney Catholic 49 following a punt. Central City appeared to put the game away when hard running, 205 pound senior Brad Schoch scored on a short run. But the Bison were flagged for holding, nullifying the TD. Facing a 2nd and 17, John Baack redeemed himself by intercepting another Mitch Carlson pass and in the process, halting another momentum-building Central City TD drive.

Both defenses made play after play for the majority of the remaining 8:55 seconds of the 4th quarter. But the always competitive Kearney Catholic football team wasn't finished with business just yet.

Starting with great field position on the Bison 47, the Stars went to work. Bryce James, who was a warrior all night despite taking a fierce beating, ripped off a 7 yard gain. Then sophomore QB Matt Masker hit senior Tyler Mestl with a 13 yard strike and the Stars were poised to score with 56 seconds left. One problem. Kearney Catholic was whistled with a block in the back and now were forced to position themselves for a game tying field goal instead of a touchdown with the clock running down.

With time expiring, Kearney Catholic quickly ushered ace place kicker Grant Buschkoetter on the field to attempt that apparent game knotting 40 yard FG. With the wind at his back, but the ball on the far right hash, the star senior kicker pushed the attempt to his left, missing the field goal and crushing the hearts of the Stars.

But Kearney Catholic's luck was not to run out here. Central City was flagged for roughing Buschkoetter and the ball was moved ahead to the Bison 35 for a final untimed down and one more shot to send the game into overtime.

The Bison defense swarmed to hurry things, and the rock steady Buschkoetter once again pulled the kick to his left. Central City had answered seemingly dozens of bells, hanging on to the hard-fought, unforgettable 20-17 victory.

When the 3 hour, 66 pass, classic battle was over, Central City emerged with a 5-1 record, setting up what appears to be the District 6 championship against Holdrege.

For Central City' Mitch Carlson it was another big night in the passing department. The All-State senior completed 19 of 36 of his throws for 252 yards and 2 touchdowns. The only rare occurrence was his 3 interceptions, but they were playing the ball-hawking Kearney Catholic Stars though. All-State WR Brady Bamesberger led the Bison receiving corps with 10 catches and 171 yards and that 85 yard TD.

Impressive sophomore quarterback Matt Masker was good on 16 of his 35 passes for Kearney Catholic, good for 139 yards. Masker suffered 2 interceptions, one a critical Pick 6. The Stars Bryce James led all rushers with 92 yards on 21 carries and a TD. 35 of those yards came on the first play of the game. The ever dangerous James also led the Star receivers with 6 catches for 70 yards.

Next Friday, 5-1 Central City will host unbeaten, 6-0 Holdrege, who features a :10.5 sprinter Cooper Rogers. Kearney Catholic, now 2-3, will host GICC next Friday before finishing the regular season with road games at Minden and Holdrege. The Stars may have to win all three to be assured of a playoff berth.

Despite Kearney Catholic only sporting a 2-3 record, the win by this Central City squad is huge. The Stars have tons of talent and should they make they playoffs, will be an unwanted draw for anybody, just like in basketball.

And Central City? The Bison just may have found a defense that can play with pretty salty Class C-1 football teams. Big, big win for the Bison.