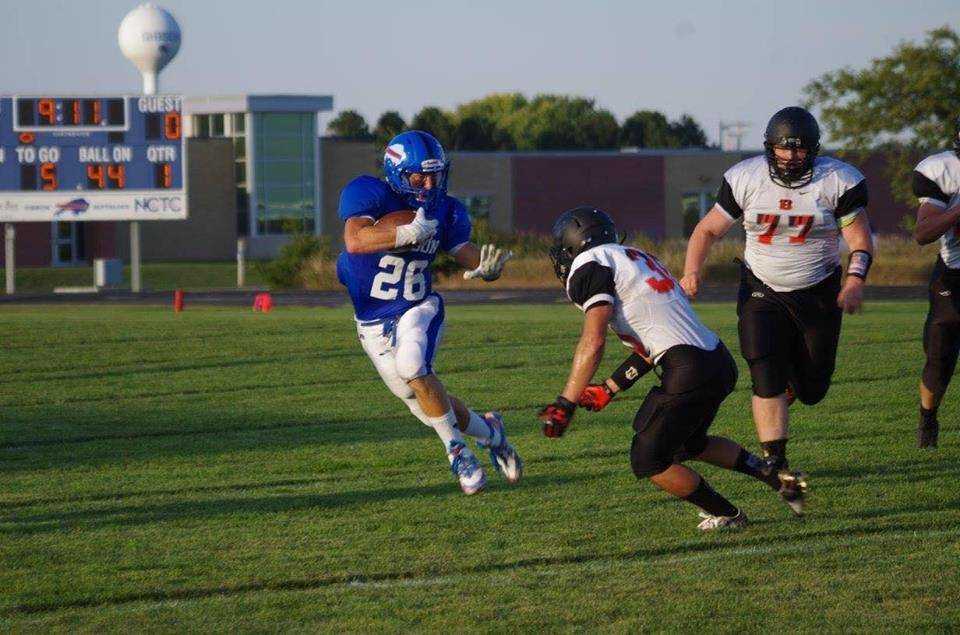 It was just one of those nights for Centura head coach Larry Baker. It looked like a long awaited matchup between two of Class C-2's top running backs, but when an ankle injury forced Centura's Travis Holcomb to sit out the Thursday night contest, things drastically changed. The result was a 64-0 runaway victory by Mark McLaughlin's number 5, Gibbon Buffaloes.

Despite the runaway score, the game did not start the way Gibbon would have liked. QB Braydn Snell, normally very accurate, suffered an interception on the Buffaloe's opening possession. The very next time Gibbon had the ball, wide-receiver Korbin Hynes had the ball stripped on an end around, causing a lost fumble. Two possessions, no points.

It didn't take long for things to change after McLaughlin huddled his troops and calmly voiced his displeasure concerning the 2 turnovers. With the clock showing 8:06 left in the first, Snell atoned for his earlier interception by drilling a 49 yard touchdown pass to junior Jaison Andrist. Snell connected with Hynes for the double extra point, and the route was on.

Gibbon tacked on two more scores before the first quarter ended, one coming on a 3 yard Tanner Gideon blast, the other on a 19 yard bullet pass to Vinny Pearson, a gutty 135 pound senior. Meanwhile, Centura struggled to get anything going and was down 22-0 after one, having been held to triple 3 and outs.

The second quarter was a nightmare for the "Holcomb-less" Centurions, as Gibbon tacked on 30 points, stretching their lead to 52-0 at the halftime break.

All-State quarterback candidate, Bradyn Snell fired his 3rd TD strike of the night to Oscar Cuellar, good for a 10 yard score. The very next possession, Tanner Gideon flashed some fancy footwork, weaving his way in and out of the Centura defense for a sparkling 37 yard touchdown journey. That made the score 36-0 with 6:32 left in the half.

Less than 1:30 later, Snell found his favorite target, Korbin Hynes for a 19 yard scoring toss, his 4th of the evening, and the opening half. Just 30 seconds later, Tanner Gideon pirated a tipped Centurion double pass, and returned it 26 yards to paydirt. The 2nd quarter explosion ended when Mark McLaughlin ordered Snell to take a knee twice, with his Gibbon team once again in Centura territory.

Gibbon added a couple more scores in the 3rd quarter, the first coming after Centura suffered a fumble on the opening 2nd half kick-off. Jaison Andrist then took over at quarterback, and promptly launched a scoring pass, nailing junior Zach Ewoldt with a 5 yard touchdown. The final tally of the game came when Andrist decided to show his running skills. With a 1:48 left in that 3rd frame, the 180 pound junior executed a beautiful fake into the line, hid the ball, then found running room for a 24 yard touchdown run. Andrist displayed excellent speed on the play, easily outdistancing the Centura defense on the sprint to the end zone. That upped Gibbon's lead to 64-0. Hard running 160 pound sophomore Jacob Tracy looked very sharp on the drive.

Centura did drive to the Buffalo 23 yard line late in the game, but the Gibbon reserve defense would stiffen to preserve the shutout, their 2nd of the season. Thus far Mark McLaughlin's forces have given up only 28 points through 5 games.

Bradyn Snell once again had a fine night throwing the football, completing 11 of his 16 passes for 187 yards and 4 touchdowns. Tanner Gideon led the ground attack with 111 yards on only 9 carries and a couple of TD runs. Hard running Jacob Tracy added 38 yards on 10 carries, while his sophomore teammate Gerardo Raymundo wasn't far back, with 34 yards on just 6 totes.

On defense, 26 Buffaloes hit the tackle column, either with a solo stop or an assist. Two sophomores led the tackles parade. Wyatt Kee and Jacob Tracy each had 11, with big 185 pound junior, Devin Stroh joining the double digit tackle club with 10.

For Centura, outstanding junior RB, Jose Guzman led the ground game with 52 yards on 16 carries. Guzman is one heck of a football play, by the way. QB Hunter Casperson had a tough night through the air, completing only 2 of 11 throws, good for only 3 yards.

Gibbon improves to 5-0 on the year and will return home next Friday to face a pretty solid 4-1 Arcadia/Loup City squad. The only loss for the Rebels this season has been a 14-7 thriller to an unbeaten Atkinson West Holt team. Centura, who should have a healthy Travis Holcomb back in uniform, will make the short trip to Wood River next Friday, who currently stands at 0-5.