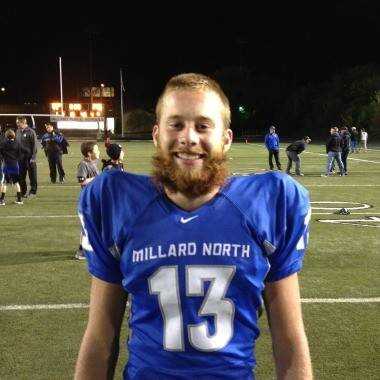 Maiden voyage for Part III this season. It just tickles me when there are so many players to recognize, and it takes three cracks at it to give out all the props this week. Sadly enough, I'm probably missing enough to include a 4th group.

We now present Part III, and just because an athlete is not mentioned until this section does not mean they weren't deserving. I simply spread them out.

*Ethan Morrison-Millard North - I promise this isn't a fabrication. In the Mustangs 49-14 win over Lincoln North Star, the senior quarterback set a school record for passing yardage in a single game. Passing Yardage Record....Millard North. Yessir, a Freddy Petito QB threw the ball more than 3 times in one game. Ok, enough with the light hearted approach. Morrison actually shredded the Gator pass defense by connecting on 15 of 20 passes for 351 yards and 3 touchdowns. Ethan's scoring throws covered 32, 77, and 70 yards. For the season, Morrison has lofted 56 passes, completing 36 of those for 715 yards (64%), 7 TDs and only 2 interceptions.

And it wasn't like the Mustangs weren't clicking with the ground attack either. They still rushed for 302 yards in the game, pushing their total yardage to a sky high 606 yards.

Andrew Wine had a terrific game as well for the Mustangs, rushing 9 times for 79 yards and TD runs of 10 and 7 yards. Wine also caught a couple of Morrison's passes, both going for touchdowns, covering 32 and 70 yards. This kind of balance might make Millard North really difficult when the postseason rolls around.

*Scott Wolverton-Seward - Bluejay signal caller ran through Schuyler's defense for 137 yards on 15 totes and scored 3 touchdowns. Wolverton's TD runs covered 54, 2, and 8 yards. Scott also completed 10 of 13 passes for 144 yards in the 47-0 win. Two of Wolverton's passes were hauled in by 6-5, 190 pound Brady Fitzke for touchdown catches of 17 and 25 yards.

*Norfolk Offense & Defense - Both were outstanding in the Panthers 59-0 shutout of Omaha Bryan last week. The offense put up 480 yards of total offense for the night, while the defense stuffed the Bears to 11 yards rushing and 18 yards through the air. The Panthers have a monumental game at home Friday when 2nd rated Millard West comes to town.

*Jake Kennedy and Noah Valasek-Riverside - In a #1 versus #2 battle for supremacy in 6-Man football, Joey Imus' Riverside football team held tight to that top spot in the rankings with a 67-22 win over a fine St. Edward team. Kennedy, the 200 pound fullback for the Chargers, ran 10 times for 106 yards and reached the end zone on runs of 4, 4, and 36 yards. Jake also caught an 8 yard TD pass from Noah Valasek. Valasek actually led Riverside on the ground with 167 yards on 15 carries and 2 TDs, plus making 10 tackles on defense.

It is going to be extremely difficult for anybody in the 6-Man ranks to dethrone this Riverside squad in 2015. With players like Kennedy, Valasek, and All-State Tanner Hudson, the Chargers look to be a pretty strong favorite to win it all again in 6-Man.

*Kyle Wemhoff-Humphrey St. Francis - 5-10, 160 senior had a whale of a game in the Flyers 58-0 trouncing of Palmer. Wemhoff ran for 172 yards on 20 carries and had scoring runs of 70 and 3 yards. Kyle also caught 2 touchdown passes of 11 and 12 yards in the shutout. Wemhoff's total offense against Palmer was 224 yards.

*Cameron Jurgens-Beatrice - Sophomore Husker football commit caught 6 passes for 115 yards in the Orangemen's 55-13 route of Elkhorn Mt. Michael. Two of the receptions went for touchdowns covering 8 and 44 yards. The 6-3, 235 TE/DE has 193 yards receiving and 4 touchdowns on offense, while mading 29 stops on defense, causing a fumble and recovering a fumble too. Nebraska knew what they were doing offering this young man when he was a freshman in high school.

*Sean Lambert-Fremont - The Tigers returning 1000 yard rusher is having yet another great season. In Fremont's 33-17 loss to Lincoln NE, Lambert returned the opening kickoff 96 yards for a touchdown, then proceeded to rush 30 times for 156 yards, boosting his season total to 649 yards. The Tigers will visit Grand Island Friday night.

*Jacob Simonson-Grand Island Heartland Lutheran - Win or lose, Jacob Simonson is consistently on fire when he takes the snap from the center and throws the football. The 160 pound sharpshooter leads all of 8-Man football with 1,259 passing yards. Simonson has hit his throws at a 61% clip, completing 77 of 126 passes in the Red Hornet's first 4 games. I hesitate to bring up this fact, but when you consider all the dropped passes Jacob has suffered this year, his totals are very, very good. You just have to see his TD to Interception ratio to know this young man is a pretty talented quarterback. The Red Hornet signal caller has thrown for 17 TDS while suffering only 3 interceptions thus far in 2015. And remember, Jacob had 1,800 yards passing a year ago and 28 TDs.

*Perkins County Football - Where do you begin? First and foremost, when a coach like Carlie Wells takes over a football program, it was the best news anyone in Grant wanted to hear. Wells, who took Elgin/Pope John to two consecutive state finals in 2007 and 2008, came to Perkins County and took the reigns of an 11-Man program in 2009. His first season, the Plainsman went 6-4, then posted records of 8-2, 8-2, and 7-3 the following seasons before a lack of numbers forced Perkins to suffer through a winless 2013 campaign.

You knew something was in the works when Wells took his Plainsman crew to Elm Creek for the 2015 opener and blew by the Buffaloes with the greatest of ease, 56-10. Yes, Elm Creek had some injuries, but still, Holy Cow. The following week it was Hitchcock County that took an 81-12 beating, two weeks ago Perkins slapped a 44-0 shutout on Arapahoe, and last Friday in Hemingford, Carlie Wells crew made a laugher out of their matchup with the defending state champs, punching the Bobcats where it hurt, 64-18.

In just 4 games, Sis has rushed for 767 yards on just 53 touches (14.5/carry) and 17 TDs. QB Johnson has 401 yards on 17 carries (23.6/carry) and 7 TDs. Charlie Johnson also has a sophomore brother, Josh, that is a very fine running back and senior end Christian White is a fine target when Charlie has to throw.

These stats look like video game statistics but I assure you, they are real. Ask Hemingford. The Plainsmen's last 4 regular season games are against Creek Valley (0-4) and three current 2-2 squads in Sutherland, Dundy County/Stratton, and Morrill. All appear very winnable.

So, how good is this young Perkins County football team? Stu Pospisil has them rated #4 in Class D-1 with only powers BDS, Creighton, and Guardian Angels CC ranked ahead. Keep your eye on this bunch come playoff time. They could make D-1 very interesting.