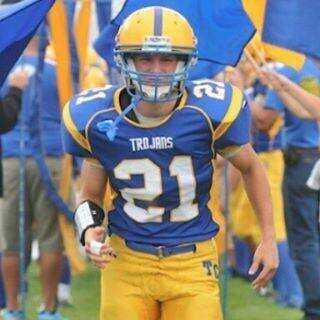 Tri-County's Colby Ensz has put together a season full of rushing stats in the last 2 games.

Too many outstanding performances this week to fit into one article. Don't you just love that? And awaaaay we go with Part II.

Colby Ensz-Tri-County - Talk about exploding the last 2 games! Ensz, a 5-8, 160 pound junior, made a name for himself a year ago by being a very dangerous return man. All of a sudden, things have changed this fall. As I said last week, Ensz ran for only 99 yards through the first 3 games of 2015, but the shifty RB broke loose for 272 yards a week ago against Freeman, then torched Fairbury for a seldom seen 420 yards on 25 carries and 5 TDs last Friday. That just doesn't occur very often in 11-Man football and Fairbury is certainly not a Sisters-of-the-Poor type football team.

Colby's scoring runs were lof the long distance variety, coming from 21, 39, 55, 72, and 68 yards out. In the past 2 weeks alone, Colby Ensz has rushed for 692 yards and 10 touchdowns. For some, that is a full season's worth. Ensz is also a pretty salty safety on defense too, recording 38 tackles thus far in 2015. He has also picked off two passes, caused 3 fumbles and recovered another.

*Garrett Ellis-Sioux County - I'm guessing Cody-Kilgore doesn't want to see this young man again. In Sioux County's 50-28 six-man win over the Cowboys, the 6-0, 160 pound senior not only tore things up on the ground, but did likewise through the air. Ellis rushed 21 times for 214 yards, scoring a touchdown, and completed 11 of 24 passes for 184 yards and five additional TDs. That's reasonably close to every other pass going for a touchdown, folks.

Garrett can truly be tabbed as a dual threat QB, although not that rare in the 6-Man ranks. In just 3 outings, yes three, Ellis has rushed for 428 yards/5 TDs and connected on 54% of his passes for 456 yards and 10 scores.

You think that's impressive, check this out. Mr. Ellis plays defensive back for the Warriors and thus far has made 50 tackles. 36 of those were solos. The multi-talented Ellis has scored 5 rushing TDs, added 2 scoring receptions, and returned a kickoff for a touchdown and brought a punt back for another. I wonder if he fixes snacks for the team after the game and drives the bus too?

*Noah Kasbohm-Nebraska City - 6-3, 200 pound dual threat quarterback extraordinaire, gave Mark Wortman's Elkhorn boys all they wanted in a 49-35 loss. Kasbohm completed 21 of his 34 throws for 283 yards and a couple of touchdowns. Noah also toted the ball 25 times for 117 yards and added 2 more TDs. I'll do the math. Kasbohm compiled 400 yards of total offense against Elkhorn, usually a very stingy defensive squad. The Pioneers actually outgained the Antlers, 451 to 418 in total yardage.

For the season, Noah Kasbohm has thrown for 725 yards and 7 touchdowns, while rushing for 477 yards and 7more TDs. Dual threat QB? Oh yeah.

*Tim Aylward-Lincoln Pius X - The 30th year coach for the Thunderbolts notched his 200th career last Friday when the 'Bolts defeated Omaha Gross. Not a ton of coaches around the state have reached that milestone. High props to you, Coach Aylward.

*Ryan Schlueter-Centennial - Another runner who just suddenly exploded onto the scene. The Broncos have had an extremely difficult schedule, which probably made it difficult for the 5-6, 160 pound junior to crack the 100 yard rushing mark in any game. Well, the schedule didn't get any easier last week against Fillmore Central, but all the blocks fell into place and Schlueter broke loose for 190 yards on 22 carries and a touchdown. Ryan scored on a 41 yard run in the Broncos 20-10 win. Schlueter also has 27 tackles for his LB slot. With 3 more winnable games on Centennial's schedule, Ryan Schlueter may really add to those rushing totals before it's all in the books.

*Kobe Paprocki and Bradley Bunner-Clarkson-Leigh - QB/RB duo came together in the Patriots 46-16 win over Howells-Dodge to form a two-headed rushing monster. Paprocki carried only 11 times, but bolted for 174 yards, scoring runs of 12, 36, 32, and 31 yards. Kobe also was accurate on 5 of his 7 passes, good for 140 yards and another TD. Bunner, who leads the Patriots this fall with 650 yards, added 154 yards on 14 carries against the Jags and had TD jaunts of 55 and 44 yards. Bunner, a junior has also made 24 stops from his safety position on defense and intercepted a pass.

*Duncan Hanzel-Humphrey/Lindsay Holy Family - Slick Quarterback brought his team back from a 30-0 1st quarter deficit vs. Fullerton, waging a terrific battle before eventually falling 66-54. My kinda game. Hanzel connected on 24 of his 40 passes for 311 yards and scoring tosses of 1, 35 and 63 yards. The 165 pound senior also rushed 15 times for 37 yards and a TD. Through 4 games, Hanzel has completed 48 of 90 passes for 623 yards and 7 scores and has actually played the quarterback position in only 3 games.

Don't know if you knew who was helping Bill Mimick coach up there in Humphrey this fall? Why, it's none other than former Boone Central/Newman Grove head man Arnie Johnson. Have you ever stopped to count the years of experience and wins between these 2 legends? Good grief!

Next season, Lyons-Decatur Northeast and Bancroft-Rosalie will join forces for football, playing the Class C-2, 11-Man game, something that will be brand, spanking new to both programs although Lyons played 11-Man football in 2007. The new team will be known as the BRLD Wolverines, with school colors being Blue, Black, and Gold.

*Hunter Spier-Lutheran High NE (Norfolk) - 165 pound junior ran for 140 yards on 20 carries in the Eagles 42-12 win over an improving Ainsworth team. Spier's QB teammate, Ayden Wiederin scored 3 rushing touchdowns in the game (4,6,10 yard runs) and threw 2 touchdown passes, one of 17 yards to Andy Zessin, the other a 7 yarder to Kaleb Rath. Ainsworth was hampered in the defeat by 5 lost fumbles and 70 yards in penalties.

*Braden Schuppan-Doniphan-Trumbull - I'm beginning to think this kid can't be held down. Despite his team losing 34-14 to tough Hastings St. Cecilia, Schuppan managed run for 151 yards on 22 carries against the rugged, hard hitting Bluehawk defense. Braden is edging ever so close to that thousand yard plateau with 878 yards in 5 games. The dude could get those needed yards at Sutton this week.

*Juan Cayaz-Grand Island - My All-State Class A Kicker a year ago, Cayax was money on three critical field goal attempts in the Islanders HUGE 24-21 win over #3 Omaha Westside. Cayax calmly nailed FG's of 26, 35, and 26 yards to secure the win for visiting Grand Island. This is the type of lad that could put one through the Memorial Stadium uprights in Lincoln to win a State Championship for the Islanders. To borrow a Bob Jensen quote....... "Just sayin'".

*Emmitt Knight-Gretna - The Knight Rider strikes again. Shredded Platteview's defense to the tune of 247 yards on 20 carries and 4 TDs. The Dragons won 48-7, held their #3 Class B rating, and improved to 5-0 for the season. In those 5 wins, the Knight Rider has rushed for 872 yards on only 91 carries (9.6/pop) and scored 14 touchdowns and has fumbled the football Zero times.

*Trevor Nichelson-Ashland-Greenwood - You didn't think I'd leave him off the list this week, did you. Can't. In Ashland-Greenwood's 41-23 win over Arlington, Trevor rushed for 148 yards on 19 totes and reached the end zone on runs of 49 and 25 yards. Nichelson also brought back a kickoff back 65 yards for his 3rd score of the game. The 2 time All-State selection has rushed for 944 yards this season, scored 12 TDs, made 60 tackles (6 for loss), and averaged 33.5 yards on each kick return, plus 14 yards a return on the punts he's fielded.

Trevor Nichelson has now rushed for 3,364 yards in his career, scored 53 touchdowns and recorded a whopping 153 tackles on defense, 25 going for losses. I'm at a loss for words.

*Clay Dickenson, Edwen Baptista, and Jay Lawler-Friend - Meshed as a unit to give the Bulldogs their 1st victory of the season, a 56-20 win over winless McCool Junction. Never thought I would be saying "first win" concerning this Friend team in 2015. More in a second on that.

The sad thing about this entire deal is the fact that 2 time All-State RB and twice 1000 yard rusher, Zemua Baptista elected to pass up his senior football season at Friend. A school that size simply cannot absorb the loss of a player that had career marks of 3,346 rushing yards, 45 touchdowns, and 245 tackles. You see, Zemua Baptista is a terrific wrestler, maybe Division One, and apparently did not want to risk an injury. Ya gotta do what ya gotta do, but how about coming back, playing a couple more games and giving us one final look at those incredible talents, Zemua Baptista?