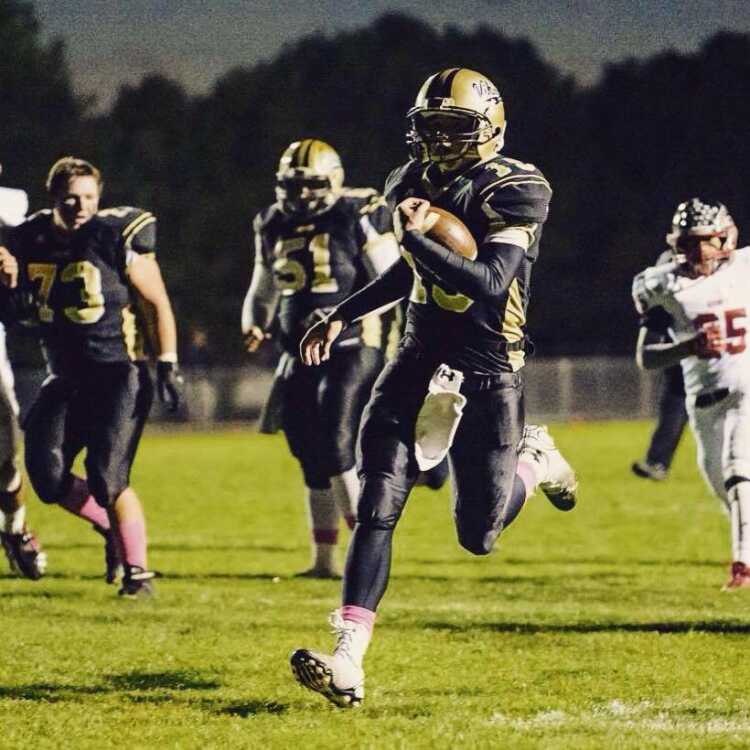 GINW Quarterback Christian Ellsworth (#15) enjoyed the game of his career last Friday against Scottsbluff with runs like this one.

Week 5 marks the halfway point in the 2015 high school football season and draws my usual lament "the football season is already half over." This fall I changed it to a more positive approach, "the fun is just beginning!"

Lots of young men and teams to salute this week, so we will do a full speed ahead to Part I.

*Christian Ellsworth-GI Northwest - The 6-4, 215 pound senior slipped on the running shoes in the Vikings 38-35 nail-biter win over Scottsbluff. Ellsworth displayed his strength and power by rushing for 170 yards on 32 carries and a touchdown. His passing game never suffered a bit despite the rushing load, as the rifle armed Viking completed 19 of his 29 tosses for 229 yards and 3 touchowns. Christian also buried the Bearcats deep in their own territory with his 2 punts.

For the season, Ellsworth has been on target with 61% of his 149 passes for 1,138 yards, 13 TDs and only 2 interceptions. Ellsworth is now a dangerous dual threat QB.

*Triston Fairchild-Papillion La Vista South - All I can figure is this young man must have liked to play outside in the rain as a kid. Last Thursday, in the pouring rain, Fairchild frolicked to the tune of 170 yards on 30 carries in the Titans 26-7 victory over Lincoln Southwest. Triston had TD runs of 16 and 2 yards in the contest and increased his season rushing total to 713 yards and his touchdown total to 7. With an average of 26 carries a contest, Fairchild has plenty of opportunities to surpass his 2014 total of 1,540 yards. Colgate University is really interested in getting this young man on their campus next season.

*Milton Sargbah-Omaha North - The sophomore was pressed into service on opening night at Millard West and hasn't stopped running since. Sargbah ran through the Creighton Prep's defense for 175 yards on 26 carries, one of which was a sparkling 71 yard TD sprint. Omaha North notched their 1st win of the 2015 season with the 21-14 victory over Prep. Milton is now at 865 yards rushing for the season and looks strikingly similar to a young Calvin Strong. And speaking of Calvin Strong.............................

*Jordan Strong-Omaha North - After sitting out with a injury, Calvin's "little bro" returned to the backfield to join Milton Sargbah for the rushing parade against Creighton Prep. The 225 pound Strong wasn't far behind his teammate, bolting for 161 yards on 20 touches and 2 scores. The junior had scoring jaunts of 2 and 40 yards in the Vikings first win of the season. Does that ever sound strange......first win. If Omaha North can get everyone healthy, the Vikings will be an unwanted draw come playoff time. After all, they are two time defending Class A champs.

*Dayton Sealey-Hastings St. Cecilia - Returned from an ankle injury just in time to bedevil Doniphan-Trumbull. The speedy RB scored on 80 and 15 yard runs, on his way to 131 yards on 13 carries in the Bluehawks 34-12 win over the Cardinals. Dayton really, really gets to the scrimmage in a hurry after the handoff. Very difficult to track for any defense.

*Jake Palensky-Raymond Central - After running for an even-steven 1,600 yards a year ago, it took the Mustang's talented senior only 5 games to break the elite plateau in 2015. In Raymond's 46-20 blasting of Lincoln Christian, Jake ripped off 218 yards on 28 carries and scored TDs from 2 and 3 yards out. Palensky swelled his 2015 total to 1,008 yards and has 12 touchdowns to go with it. After narrowly missing the playoffs a year ago with a 6-3 record, you can bet Jake Palensky and his buds have a post-season berth on their minds this fall.

*Drew Gilliland-Mitchell - Kimball was the only football team to hold this talented quarterback to under a 100 yards rushing this fall. Last Friday, Gordon-Rushville didn't have that kind of luck as Gilliland exploded for 241 big ones on 17 carries and 3 touchdowns in the Tigers 37-28 win. Drew increased his season running total to 881 yards and 11 TDs as Mitchell remained undefeated. The Tigers, who play only 8 regular season games this fall, have the meat of their schedule remaining, with games against Chadron, Ogallala and Chase County.

*Cam Carritt-Milford-Dorchester - 5-11, 190 Quarterback/Safety did it all in the Eagles 41-6 win over Fairbury. Carritt scored 5 of the 6 touchdowns in the game, with four coming on offense. Carritt scored three times in the opening half, the first two coming from 3 and 8 yards out, but the 3rd one may have been a crippler to the Jeffs. Fairbury drove to the red zone with less than 3 minutes left in the second quarter but lost a fumble. Just a few blinks later, Carritt took off an a 92 yard touchdown sprint and the Eagles had themselves a 27-6 cushion at halftime. Carritt would score two more times in the contest, one coming on a 14 yard run, the other on a 21 yard interception return. The Milford-Dorchester defense also limited explosive sophomore Jacob Johnson to 49 yards on 12 carries. Just a week ago, Johnson ripped Johnson County Central for 335 yards and 7 TDs.

*Lane Cacek-Freeman - The 5-11, 155 sophomore had previously carried the ball 32 times for 69 yards total in the Falcons first 4 losses. He must have ingested some rocket fuel before the Weeping Water game because Cacek blasted off for 196 yards on 21 carries, scoring on runs of 35, 3 and 15 yards after halftime. Freeman led only 14-13 at the half, but Lane's explosion helped the Falcons post a 35-13 win over the Indians and notch their 1st win of 2015. I believe first year coach Travis Andreasen just found himself a running back to feed the rock to 20 times a game.

*Andrew Fangman-Elgin/Pope John - The 178 pound senior RB/MLB was all over Clearwater/Orchard in the rain last Thursday. Fangman rushed for 164 yards on a grueling 36 carries and scored five touchdowns. Andrew's TD runs came from 2, 3, 1, 4 and 3 yards away. Fangman also made 10 tackles in the game, increasing his 4 game total to 46. The senior standout also padded his rushing total to 846 yards on just a 100 carries this fall. Fangman has already scored 16 touchdowns, never rushing for less than three in any one of the opening 4 Wolfpack outings. This guy is a pure football player.

*Sam Zeleny and Sean Maxon-Exeter-Milligan - The two combined to get the Timberwolves over the hump in an exciting 16-14 win over a fine Giltner team. Zeleny, the junior quarterback, ran for 110 yards on 26 carries, and scored on TD runs of 1 and 2 yards. His junior teammate Sean Maxon, added 108 yards on 22 totes as Exeter-Milligan improved to 3-0 on the year. Since Exeter and Milligan joined forces in 2003, the team has never missed a post-season and has been in the past three Class D-1 state championship games in Lincoln. The Timberwolves were D-1 runner-ups in 2012 before winning it all in that class the past 2 seasons. This year, Exeter-Milligan dropped to D-2 and may be primed and ready to add a third State Championship trophy to that 12 year old trophy case.

*Trevor Peterson-Lincoln Northeast - The 6-0, 180 Quarterback, who threw for 1,029 yards a year ago, took the Rockets to Heedum Field in Fremont and showed the Tigers what explosive plays looked like. After Fremont's star, Sean Lambert took the opening kickoff 96 yards for a touchdown, Peterson and company went to work. Before it was in the books, Trevor Peterson connected on a fat 25 of 36 passes for 308 yards and five touchdowns. Trevor threw a 9 yard scoring pass to Tivon Phillips, nailed Alonga Chol with TD tosses of 8 and 32 yards, found Braly Keller for a 2 yard passing TD, and then scored on a 7 yard quarterback keeper for good measure.

*Sad Endings.......one occurred a week ago and the other last Friday night. In the cross town rivalry battle between Bellevue East and Bellevue West, the world of Nebraska Prep football lost one it's best football players and Class A's passing leader.

Bellevue East senior Dillon Hike tore an MCL and will likely miss the rest of this 2015 campaign. By the looks of the 82-0 score, I'm wondering if Dillon ever got to launch a pass in the contest? A short week ago, the poised senior led Class A in passing with 1,240 yards and 10 TDs. I was impressed the minute I saw this young man play in the season opener against Lincoln East. Surgery will not be required, but it is a true heartbreak to see this happen. My best wishes to a wonderful young man and a great quarterback. Hang in there MOM.

......a week ago against McCook, promising junior Scottsbluff running back, Max Mason broke his leg after gaining a huge 141 yards in the 1st half. The half had not even ended and Mason's junior year was in the books. Max did have surgery, having to have ligaments reattached in that leg. In less than 3 and a half games, the speedy junior had run for 429 yards, averaged 11.1 yards a pop, and scored 5 touchdowns. At 5-6, 150 pounds, Max was extremely difficult to locate once he took the handoff.

Look out next year!