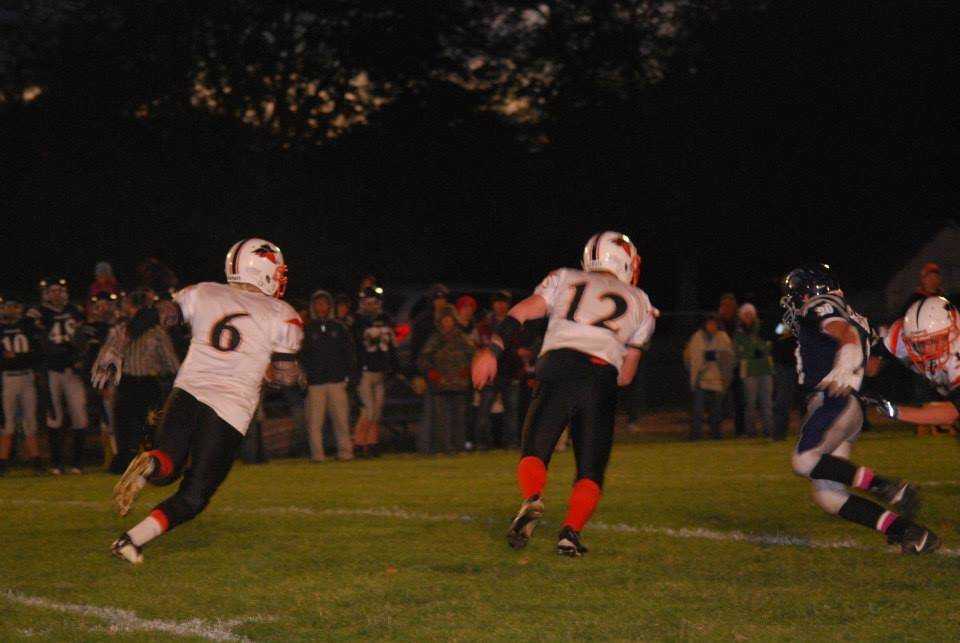 Chambers/Wheeler Central quarterback (#6) skirts the outside for more big yards. Pelster is one of 8-Man football's best.

We're off and running with the 2nd installment of last week's eye opening performances in the wonderful world of Nebraska high school football. This just gets better and better as the season progresses.

Brenden Pelster-Chambers/Wheeler Central - This young man has been starting for the Renegades since his sophomore year and Friday night he may have led his team to its biggest victory yet. CWC pulled off the upset win against powerful Humphrey St. Francis and did in in style with a convincing 28-6 win. The CWC defense stuffed the vaunted Flyer running game and picked off 5 passes while Pelster was directing the offense. Well, Brenden did a "little" on the defensive side too.

The 5-10, 170 pound senior rushed for 138 yards on 19 carries and scored all 4 touchdowns in the monumental win. Pelster also completed 7 of 12 passes for 75 yards and just dominated on defense, making 21 tackles, including 8 solo stops and an interception. Brenden also kept the Flyers pinned back on kick-offs, sailing 4 out of his 5 boots into the end zone for touchbacks.

For his sparkling career, Brenden Pelster completed 124 of 229 passes for 2,103 yards and 33 touchdowns with only 12 interceptions. He has rushed for over a 1000 yards both his sophomore and junior seasons, running for 1,285 and 1,312 yards respectively. In three games this fall, Pelster has rushed for 347 yards, bringing his career total to 2,944 yards and 49 TDs. What a player!

*Jaydn Kowalski-Bellevue West - Just a normal day at the office for the record setting Thunderbird quarterback. In that 49-10 win against Omaha North, Kowalski was white hot, completing 11 of 14 of his tosses for 250 yards and five touchdowns. That's right, nearly every other pass was of the scoring variety. Kowalski already had 4 TD passes by halftime, as Bellevue West had a comfortable 35-3 lead at the time.

As good as the Bellevue West offense is, all I've heard this past weekend is how strong the Thunderbird defense is becoming. Just how sharp is head coach Mike Huffman, who came straight from Fort Calhoun to take the Bell West gig? I think you know the answer to that one.

*Emmitt Knight-Gretna - The Knight Rider, baby. Only needed 15 carries in the Dragons 61-3 win over winless Schuyler to run for 149 yards and 3 TDs. Seriously, this kid is getting stronger every game and now has 625 yards (9.9) on the ground to go along with his 10 touchdowns. I hope Knight gets to the 1,500 yard rushing mark or beyond this season. Very exciting player to watch.

*Logan Duryee-Omaha Westside - Carried the rushing load in the Warriors 22-10 win over Lincoln NE. Duryee rambled for 175 yards on 34 carries and scored on a 52 yard run in that Warrior win. Duryee and his Westside offensive buds will face one of the stingiest defenses in the state when Grand Island visits this Friday. Huge game.

*Nate Smith-Beatrice - Smith continued his torrid rushing pace in the Orangeman's 39-8 win over a stubborn Nebraska City team. Nate bolted for 199 yards on 27 carries, scoring on runs of 10 and 65 yards to lead Beatrice to its 3rd straight win after an opening 35-0 loss to #1 Omaha Skutt. A week ago, the 170 pound senior broke loose for 246 yards against Elkhorn's defense, which is unheard of. Smith's rushing total sits at 501 yards for the season.

*Bradyn Schuppan-Doniphan-Trumbull - The senior speedster had the best rushing night of his career in the Cardinals 33-6 win over Centennial last Friday in Doniphan. The speedy Schuppan exploded for 277 yards on 21 carries and scored on TD scampers of 18, 1, and 90 yards. Braden also caught a 15 yard scoring pass in the win. Schuppan's 2015 rushing total has swollen to 727 yards already with a 9 yards a carry statistic to go with it. Friday night is the big C-2 matchup when Hastings St. Cecilia comes to town to face Doniphan-Trumbull. Expect lots of defense in that baby.

*Aaron Giannou and Tanner Lamoree-Cross County - In the Cougars 32-6 win over Friend, Giannou, the defending Class C 400 Meter Dash champion, ran for 145 yards on just 10 carries and scored from 55 and 59 yards out. Lamoree added 108 yards on 22 carries and reached paydirt from 35 yards away in the win. Both Giannou and Lamoree are just Juniors for this quickly improving Cross County football team. Coach Ty Twarling has 'em going in Stromsburg this fall and will be just plain scary in 2016.

*Columbus Scotus "D" - Limited 3rd rated Pierce (C-1) to just 41 yards rushing in the Shamrock's 27-14 road win over the Bluejays. The defensive front 3 of the 'Rocks may be the best in all of Class C-1. Scotus had 10 tackles for losses in the game including 3 sacks. All-State player Jake "The Boss" Boz recovered a fumble and Dalton Taylor, Marcus Dodson, and Jackson Kumpf all picked of Pierce passes. It just seems like a Scotus/Norfolk Catholic matchup lies somewhere down the road, and it could very well be played at a neutral site in Lincoln.

*Kevin Schroer and Cody Byers-Lawrence-Nelson - Schroer, a sophomore, ran for 147 yards on 13 carries and scored twice in the Raiders win over previously undefeated Heartland Lutheran. Byers chipped in with 136 yards on 11 touches and scored on runs of 55 and 20 yards. Boy do I love Lawrence-Nelson's head coach. Brian Blevins is one of the best and was certainly one of the best athletes Stapleton ever had go through that place. It shows in his coaching too.

*Ben Heggem-Scottsbluff - What? Another back that just seems to come out of nowhere to rush for over a 100 yards? Coach Joe Benson, how many more of these gems do you have in that Bearcat stable?

Coming off a 20-14 loss to McCook, Scottsbluff looked to rebound in a big way last Friday and unfortunately for Adams Central, the Bearcats did just that. Scottsbluff raced to a 44-0 halftime lead enroute to a 51-28 shellacking if the Patriots. On the Bearcats very first play from scrimmage, Mr. Heggem raced 69 yards for a touchdown and the offensive fireworks display was in session. Big Ben scored again on a 60 yard run and proceeded to rush for 176 yards on just 8 touches. Actually, Ben Haggem is the Bearcat's fullback but certainly must have some nasty speed for a 6-0, 215 pounder.

If you think this Scottsbluff team has lost some luster just because of the McCook loss, think again. Joe Benson and his staff are pretty sharp football minds and they "ain't" goin' away. The Bearcats will be in GI Friday night for a terrific Class B matchup with Northwest. Don't know if I can pass up that one!

*Matt Masker-Kearney Catholic - The Stars snapped a two game losing streak with a 41-6 thumping of Cozad. Masker burned the Haymaker defense by connecting on 13 of 22 passes for 277 yards and 3 touchdowns with his lightening quick releases. Masker is completing 60% of his throws and just gets better every game for the Stars. Bright future for this young man, who has great bloodlines, just like many others from Kearney Catholic.

*Matt McCarthy, Elliot Epp, Mason Zorn-Garden County - What a backfield at "I- Back High West." Actually, Garden County doesn't throw that much, but Mullen must have made the Eagles really mad Friday. The Broncos jumped on top Garden County 24-22 after the one quarter, but the Eagles roared back with 34 second quarter points and proceeded to send the Broncs back to Mullen with a 70-44 loss.

Neither McCarthy or Epp took game rushing honors though. That award went to Mullen's 2-time 1000 yard rusher, Gideon Monette. The 195 pound star went off for 247 yards on 31 carries and scored on TD runs of 6, 65, and 9 yards. The Mullen standout has accumulated 575 yards in three games thus far in 2015.

By the way, Elliot Epp made 23 total tackles in the game. This kid may very well be the best tackler, regardless of class, in all of Western Nebraska. No stretch there.

*Trey Taubenheim-Amherst - Had an "off" night in the Bronco's 59-0 whitewashing of Franklin. The Amherst sharpshooter "only" completed 12 of his 20 passes for 186 yards and 3 touchdowns. Actually, you know I'm kidding about these stats, it was the lowest output in three games thus far in 2015. In the 66-22 season opener vs. Shelton, Taubenheim hit the same exact 12-20 passes, but that night those same 12 throws were good for 280 yards and seven TDs. It gets better. After a week off, the Broncos took a little trip to Axtell and Trey blitzed the Wildcats for 464 yards and eight touchdowns. The Amherst whiz threw 36 times, completing 28 of those aerials.

For the season, Taubenheim has been good on 69.7% of his passes for 920 yards and 18 TDs. The senior has put up 76 passes and been picked off only twice. Trey is looking at a second straight All-State selection.