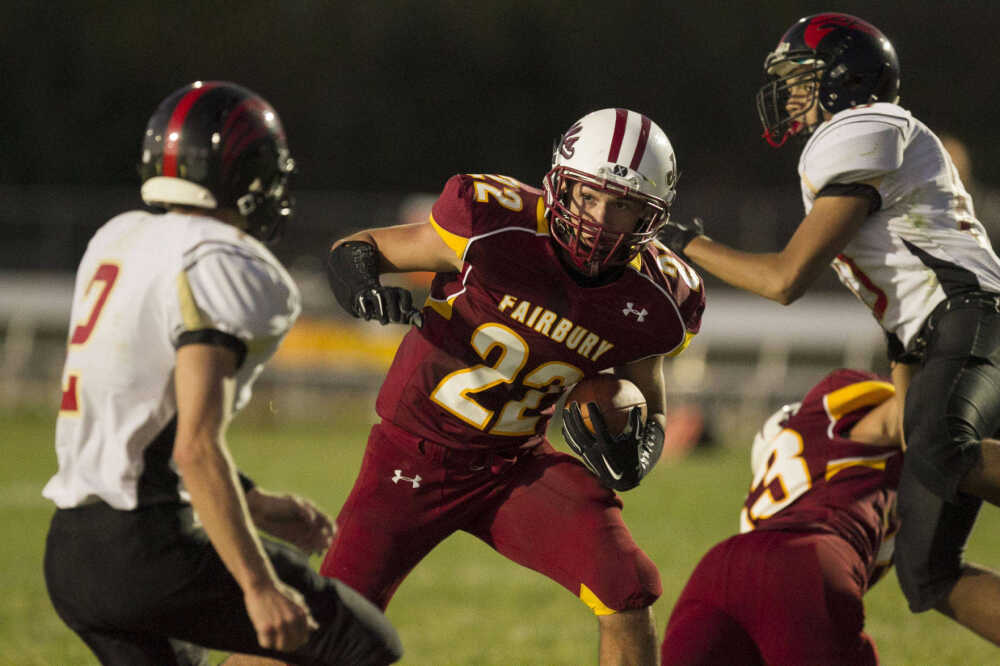 I have one question. Where did all the sophomore talent come from this fall on the gridiron? I mentioned a few in my preseason "Players to Watch" series and honestly, I just knew there a couple of these youngsters was just waiting to explode like a stick of dynamite one Friday night.

So, let's cut right to the chase and present the first group of three sections of Friday Night Football heroes. Yes, there are that many. I love it.

Jacob Johnson-Fairbury - I knew it, I just knew it. It didn't take long for this sophomore standout to uncork an extraordinary performance for a vastly improved Fairbury Jeffs team. In a 54-23 win over Johnson County Central, the 5-10, 190 pound 2nd year starter jetted for 335 yards on 19 carries and scored 7 touchdowns. That's 17.5 yards a touch and nearly a touchdown every other time he touched the ball. Jacob's 7 rushing TDs in a single game ties the Class C-1 record, held by 2 other players. Johnson's TD runs covered 5, 8, 1, 35, 47,53, and 37 yards. He also made 9 tackles on defense.

Now remember, young Johnson started for the Jeffs as a freshman a year ago......in Class C-1, mind you, and not only rushed for 721 yards, but made 75 tackles on defense. That just has to indicate the kid started on both sides of the ball I'm thinking.

So, in just 4 games this season, Jacob Johnson has run for 818 yards on just 88 carries (9.3/per), scored 12 touchdowns, caught 4 passes for 121 yards, two of which were touchdowns. On defense, Jacob has made 30 tackles and 25 were solo stops, and 5 of those solo tackles were for losses. Unbelievable!

*Jaylin Bradley-Bellevue West - Bolted for a 73 yard TD gallop in the Thunderbirds 49-10 win over defending Class A champion Omaha North. The long TD run was one of Jalin's 12 carries for 148 yards. The smooth 175 junior has now posted three straight 100+ games and totalled 476 yards on only 50 carries in 4 games for Bellevue West. Think you can just focus on stopping Jadyn Kowalski and his aerials to Cadan Johnson and Trystn Ducker? Think again.

*Dillon Hike-Bellevue East - Seriously, I never delete Dillon's name, I just leave it there for the following week. In a 62-42 scoring fest in South Sioux City, Dillon completed 19 of his 25 passes for 322 yards and 4 touchdowns against the Cardinals. One of those 4 TDs was a perfectly executed, electrifying 99 yard scoring pass to speed merchant sophomore, Alex Pavon. The Tom Brady looking scoring toss was a thing of beauty, indeed. Hike just lofted the ball to a spot, Pavon ran under the perfect strike and the rest was history.

Hike increased his Class a leading passing yardage to 1,240 big ones after the SSC game. Dillon is 97 of 152 passing this season through 4 games with 10 TDs and only 3 picks. Despite launching nearly 100 passes, the Chieftain sharpshooter is still completing 64%. If college scouts aren't taking notice already, somebody is missing something. Hike is only a junior, ya know.

*Trevor Nichelson-Ashland-Greenwood - Think this sounds like a broken record? Consider how old this gets to Ashland-Greenwood's opponents. Nichelson carried the ball only 15 times in the Bluejay's 57-22 blowout of Lincoln Christian. Nichelson scored a TD on his first carry of the game, which covered 50 yards. That increased his season rushing total to 790 yards (10 TDs) and pushed his career rushing mark to 3,210 yards. Don't forget he's a junior. Trevor also made 10 tackles in that contest and caused 2 fumbles.

.....and on an extremely sad note, 6-4, 270 pound All-State junior lineman Brett Kitrell tore his MCL and will be lost for the remainder of the 2015 season. Just makes you want to cry like a baby. Get well fast, Brett.

*Gibbon Buffalo Defense and "O-Line" - Check this out, prep football enthusiasts. twenty three different players made at least one tackle in the Buffaloes 48-8 win over Class C-2 #10 rated Bridgeport. Five players posted double digit tackles, including a 19 tackles performance by wicked 180 pound sophomore linebacker, Wyatt Kee (#34). So potent was Gibbon's defense, the Buffs recorded 10 tackles for losses and a few were on two-time 1000 yard rusher Wyatt Pankowski, a terrific football and a man.

Will this 2015 Gibbon team lose a regular season game?

*Jake Palensky-Raymond Central - Laid a 266 yards on 22 carries game on Auburn in the Mustangs 41-6 win over the Bulldogs. Palensky was probably rarin' to go after getting only 8 carries in Raymond's easy 53-6 victory over D C West two weeks ago. Big Jake now has 790 yards on just 83 totes this fall while Scoring 8 TDs. For his 22 game career, Palensky has run for 3,185 yards and scored 32 touchdowns.

*Colby Ensz-Tri-County - How's this for a breakout game? In the Trojans 46-21 victory over Freeman, the 155 pound junior broke loose for 272 yards on 23 carries and scored five touchdowns from 2, 34, 17, 33, and 46 yards out. Prior to the Freeman game, Ensz had rushed for a grand total of 99 yards. Wow. Think Brett Scheiding found himself a running back?

*Riley Tegtmeier and Kale Kleinschmidt-Bruning-Davenport-Shickley - Both of these BDS stars were involved in 4 touchdowns apiece in the Eagles huge 40-26 win over highly regarded High Plains. Quarterback Tegtmeier threw TD passes of 35, 43, and 10 yards, and also reached the end zone on a 10 yard scamper. Kleinschmidt hauled in touchdown receptions of 35 and 43 yards, and rushed for 2 more TDs. Those scoring runs covered 2 and 7 yards. The Eagles scored 20 points in the 4th quarter to steal the win from High Plains. I really do not have to tell you how good this BDS team is.

*Andrew Fangman-Elgin/Elgin Pope John - Here's a football player, man! The 5-8, 170 pound senior RB/MLB rushed for 264 yards on 18 totes and scored 5 times in Elgin/Pope John's 56-19 win over Hartington/Newcastle. Fangman has already run for a whopping 682 yards on 64 carries (10.7/per) and scored 11 TDs in just 3 games and made 36 tackles this season. Andrew Fangman is just one of those guys that is nearly impossible to stop, Win or lose, Andrew is going to get his yards and much more. Serious, serious candidate to be a repeat All-Stater.

*Tyler Pawloski-Pleasanton - OK, Ricci Westland's team has had a tough couple of games to start 2015, but young Tyler decided to turn it loose against Loomis. Here's the deal. Tyler Pawloski is 5-5, 125 pound freshman and had carried the ball two times for a total of 3 yards coming into the Loomis game. Against the Wolves, the hard running/hard to locate Pawloski scored on 25 and 54 yard runs and caught two identical 33 yard TD passes from Bulldog sophomore QB Hunter Paitz. Pawloski's freshman buddy, Riley Racicky, rushed for 152 yards on 12 carries and scored on a 47 yard run for Pleasanton in the same game. Think of how good Coach Westland's forces will be down the road. The Bulldogs are no stranger to success, so stay tuned.

*Gage Orten-Plattsmouth - Another name you may as well just leave on the list. In the Devils 34-17 win over Seward, Gage ripped the Bluejay "D" for 188 yards on 21 tries and scored twice. The 190 pound Orten has already accumulated 595 rushing yards on only 77 carries this season. And how about this 2015 Plattsmouth football squad? They're 4-0 thus far, and have had only 3 touchdowns scored against them, 2 of which came in the Seward game. Good to see.

*Ethan Morrison and Nick Engle-Millard North - Where the heck did Nick Engle come from? In three previous Mustang games, the 5-11, 195 junior had only 37 yards on 10 carries. Now, prior to Millard North's 59-17 Seacrest nightcap win over Lincoln SW, the 'Stangs had not had a 100 yard rusher in any of their first 3 games. Hard to believe. Well, Engle changed that by running for 165 yards on 19 carries against the Silverhawks. Nick also scored TDs on runs of 44 and 41 yards. I think you found yourself a running back Coach Petito.

Ethan Morrison also ran for 81 yards on 18 touches in the Southwest game and also connected on 7 of his 9 passes for 139 yards and 3 touchdowns.

*Trystn Ducker-Bellevue West - Right smack dab behind Black in Class A receiving yards. Against Omaha North, the 5-10, 165 pound Ducker caught 5 passes for 92 yards and 2 TDs. The scoring receptions covered 30 and 54 yards for the speedy Ducker. Trystn is also a dangerous punt return man and already has picked off a pass on defense this year. Mr. Ducker looks to headed to a 1000 yard receiving season.