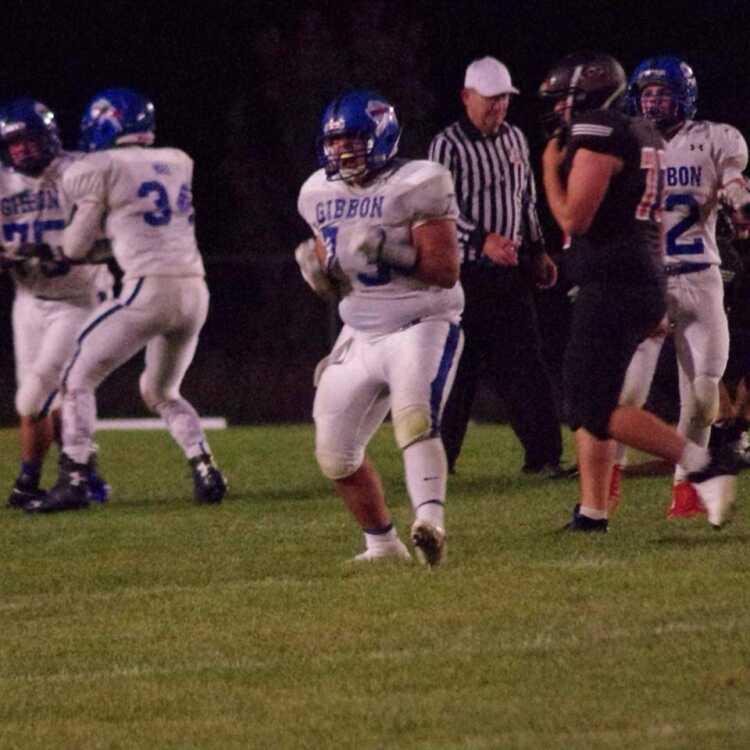 The bigger they come the harder, they fall? The 2-1 Bridgeport Bulldogs rolled into Gibbon with a couple of 300 pounders, (316, 326), and a starting lineup that averaged 199 pounds from one side to the other. But it was the crisp, quick line of the Buffaloes that made things look easy at times as the homecoming crowd in Gibbon was treated to a resounding 48-8 shellacking of the 10th ranked Bulldogs.

Gibbon's line didn't exactly look like a David going up against a Goliath tonight with lineman like All-State candidate Ozzy Rodriguez checking in at 265, but when you put him across the line from a couple of Guards whose combined weight adds up to 642 big ones, some begin to wonder. But it was the quicker Buffalo line that paved the way for Gibbon touchdowns on 4 of their first 5 first half possessions and a 28-0 lead.

The only time Mark McLaughlin's 6th rated Gibbon team didn't score in that 1st half was their opening possession, which resulted in a punt. But it didn't take long for the Buffs to make a statement after Bridgeport ran up to the line of scrimmage following the Gibbon punt. Two time 1000 yard Bulldog rusher Wyatt Pankowski carried for 2 yards to open the possession, then 15 more, but was cracked hard on his 3rd touch, and coughed up the ball. The Buffaloes recovered at the Bridgeport 37 and the Gibbon O-Train started rolling.

Quarterback Bradyn Snell took it in from 3 yards out for the first score 4 plays after the recovered fumble. 4:20 later, the nimble-footed Snell found All-State wide out Korbin Hynes for a pretty 40 yard touchdown reception. Snell again connected with Hynes on the double PAT, and Gibbon had a 14-0 after one quarter.

Bradyn Snell once again found Hynes on an 11 yard TD strike with 6:59 left in the 2nd quarter. Three minutes later, RB Tanner Gideon, a quick cutting navigator, found paydirt from 5 yards out. With 3:44 left in the half, the much quicker Buffaloes had a 28-0 lead.

Bridgeport fashioned a 14 play, 81 yard drive that ended with a 2 yard Wyatt Pankowski score with only 1.2 seconds left in the half. The drive was aided by a couple of Gibbon penalties, but the fast, hard running Pankowski flashed his All-State skills by carrying the ball 6 straight times for 29 punishing yards. What was more impressive about Pankowski, is that he left with an injury just 6 minutes before the drive but quickly rebounded to lead the drive.

Gibbon controlled the second half and added two more 3rd quarter scores, one on Snell 2 yard scamper, the other coming from an 8 yard dash by sophomore Jacob Tracy, who looked very good toting the football.

The Buffaloes led 42-8 after 3 quarters and tacked on another score with 9:35 in the 4th when Tracy again rambled in from 3 yards out. That touchdown kick started the running clock, which is initiated when a team has a 35 point lead after halftime.

Bridgeport was driving as the contest wound down, but the proud Gibbon reserves played stingy on defense and crushed the drive on the Buffaloes 11 yard line as time expired.

It was an impressive 40 point win for this Gibbon Buffalo team tonight. That rock solid defense, led by Ozzy Rodriguez, Jesse Walker, Coltin Brown, Wyatt Kee, Cristian Tamayo, Devin Stroh, Tanner Gideon, tough-as-nails Oscar Cuellar, Vinny Pearson, and Korbin Hynes, and Daulton Lurz, limited the Bulldog rushing game to 201 yards, 110 of those yielded to Wyatt Pankowski. The star Bridgeport RB was finally pulled from the game in the 3rd quarter when it appeared Gibbon had things wrapped up.

Those 201 yards by Bridgeport was all they could muster, as the 'Dogs went 0-5 in the passing department for zero yards.

For Gibbon, Tanner Gideon led the ground attack with 107 yards on 14 carries and a TD. Jacob Tracy added 39 yards on only 8 carries and 2 more scores. Quarterback Bradyn Snell was outstanding when he threw the ball, connecting on 13 of his 20 passes for 228 yards, 2 touchdowns, and no picks. WR Korbin Hynes caught 5 of those Snell aerials for 93 yards and 2 scores.

A win like this makes you wonder about how good this Gibbon team might be? I'm certain Mark McLaughlin wasn't thrilled about 80 yards in penalties, but the overall performance of this crew had to turn some heads, especially his. When you consider the Buffaloes buried Cambridge 71-0 a week ago, and Hastings St. Cecilia led that same Trojan bunch only 7-0 at the half on the Bluehawks own homecoming turf, it stirs some thoughts. But knowing Mr. McLaughlin, his staff and players, I'm relatively certain they know the season is young and a lot lies ahead, but one would be a fool to think this victory wasn't impressive.