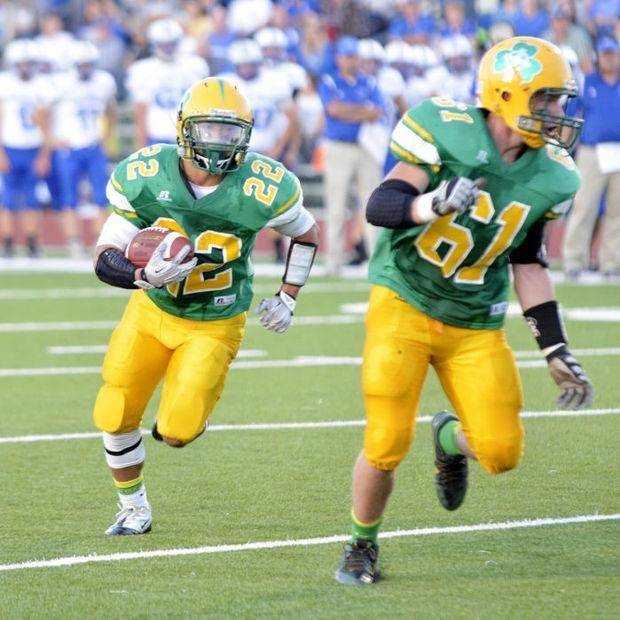 As my late, great, famous father, Bobby Mills Sr. used to say "Let's get to it and Do it."

Here is the 2nd, but not least, installment of Friday Night Heroes.

*Baeley Pelster-Columbus Scotus - Remember me telling you about this young man before the season started? I knew it would only be a matter of time before he performed his magic against somebody, and Central City drew the short straw. The swivel-hipped senior tore through the Bison defense like a spring tornado, rambling for 192 yards on only 14 carries. Pelster's TD scampers covered 35, 47 and 35 yards in the 'Rocks 49-21 victory. Baeley's teammate, Marcus Dodson, also got into the act by running for 173 yards on just 7 touches. His TD jaunts covered 89 and 42 yards. If you think Scotus isn't the real deal, take a look at their schedule. I call it "Nightmare on Bonnie's Avenue"

*Keenan Stupka-Anselmo-Merna - It appears the heir to Trent Geiser's shoes will fill those just fine. In the Coyotes hard fought 52-42 win over Bertrand, under the glorious afternoon sun, the 145 pound junior ran for a tough 161 yards on 31 carries and scored on runs of 3, 40, and 6 yards......all in the opening quarter. This kid is a tough football player on both sides of the ball.

*Tyrell Younger-Bertrand - In that Anselmo-Merna loss, Chance's little brother looked like the real deal. Tyrell rushed for 146 yards on 26 carries and scored on runs of 57, 1, 3, and 1 yard out. Younger also caught a 57 yard TD pass to keep the Vikings in the ball game. Tyrell has strung rushing performances of 268, 277, and 146 through the first 3 games. Add 'em up in your head now, it's good for you. Did you have 691? Cool. Neat thing about that is Younger has carried the pig only 59 times. I'll do that one for you.......11.7 yards a pop. All-State material, big time.

*Thomas Young-High Plains - Many of you recall the sophomore performance of Mr. Thomas Young at the D-1 State Basketball Tournament. He was instrumental in leading High Plains to that title last March. Well, now Young is a junior and bedeviling opponents on the gridiron. Thomas is the QB for the Storm and last Friday he hooked up with wide receiver Josh Demers in High Plains 49-28 win over Blue Hill. Young completed 15 of 21 passes for 224 yards and those 4 touchdown throws went to Demers. Those TD tosses covered 10, 50, 64, and 22 yards. Yep, that's 146 yards in receptions for Josh Demers alright. Thomas Young is completing 59% of his passes this season. (24-41-365)

*Trevin Ball and Caleb Brown-Lincoln North Star - These 2 have developed quite a connection on the football field and needed it against Fremont. In the Gator's 28-17 win Friday, Ball found his buddy 6 times for 80 yards, 2 of them going for scores. The TD passes from Ball to Brown spanned 15 and 30 yards. Trevin did end up connecting on 9 of his 12 tosses for 105 yards. Oh, Trevin Ball also rushed for 146 yards on 22 carries and scored 2 more TDs in the contest.

Trevor Nichelson-Ashland-Greenwood - In the Bluejay's 41-14 win over Falls City, Nichelson punished the Tigers with 228 yards on only 15 touches and scored on TD runs of 47 and 70 yards. Remember, Trevor is a Junior. So, in 29 career games, this 2 time all-state selection has gained 3,015 yards on the ground and crossed the goal line 43 times. In 2015, Nichelson has already rushed for 595 yards and we haven't even started to tell you about his defensive skills. Wow.

*David Englehaupt-Norfolk Catholic - 6-4, 230 pound Wyoming commit rushed for 107 yards on 24 carries and scored all the Knight touchdowns, giving Catholic a 30-8 lead over 3rd rated Wahoo Neumann going into the 4th quarter. Good thing. Neumann rallied and nearly pulled off a hook and ladder, which would have closed the Cavs to within one point. As it was, Norfolk Catholic hung on to beat Neumann 30-23.

*Riley Tegtmeier-Bruning-Davenport-Shickley - In the Eagle's 52-6 win over Giltner, Tegtmeier, a very intelligent football player, was 6 of 8 passing for 198 yards and 4 touchdowns. Sam Christenson grabbed TD receptions of 60 and 7 yards, Ben Elznik caught a 5 yard TD, and junior Kale Kleinschmidt grabbed a 29 yard scoring strike. Tegtmeier also ran for 101 yards on 14 carries in the game. Man alive, this BDS team is good! Good grief, the linebacking trio of Christensen, Elznik, and Kendall Dickson could be standouts in Class A and that is no stretch.

*Skyler Ratkovec-East Butler - I'm telling you, this kid is something else. In a 68-32 win over Nebraska Lutheran, Ratkovec rushed 12 times for 183 yards and 3 TDs (2, 35, 40 runs) and passed for another 188 yards and 4 more scores. 3 of those TD passes went to sophomore Trevor Havlovic and covered 25, 45, and 34 yards. For 2015, Ratkovic has rushed 5 times for 521 yards and as far as I can calculate, Mr. Havlovic has at least 390 yards and 9 receiving touchdowns. Havlovic.....isn't that just a great name coming from the Bohemian Alps South? ( Bohemian Alps North = Clarkson, Howells etc)

*Milton Sargbah-Omaha North - This youngster is making the same splash that Calvin Strong did. Through 3 contests, Milton Sargbah has rushed 64 times for 608 yards, and 7 TDs. That's 9.7 yards/carry and an average of 202 yards a game. And lest we forget, he's a sophomore.

*Trevor Holcomb-Centura - Doesn't matter whether Centura wins or loses, Trevor Holcomb is gonna get his yards......and a whole bunch of 'em. In the 48-16 thumping by West Holt, Holcomb still ran for 200 yards on 34 carries and scored both touchdowns. He also made 14 tackles. Trevor also averages 41 yards every time he kicks off, 37 every time he punts it and is the kick return man for the Centurions, averaging 19.7 yards a return on those. You know, this kid has already carried the ball 101 times in three games and has fumbled ONCE. That is ball security.

..........Let me call a brief time out here and talk about ball security and how times have changed. I started all 3 years at running back for GICC back in '64-'65-'66 (that's 1964-65-66, don't go there.) and never fumbled the ball once. Not one time. Never did in freshman football either. Great accomplishment? Probably not. Stripping the ball ball was unheard of back then, and they certainly didn't hit as hard, and if we did fumble, Coach Robert E. Ley would make the guilty party carry a gigantic baby doll around school for the next two days. Not many fumbles by the Crusaders back in those days. Still remember that ugly doll being carried by some poor fumbling soul to this day.

*Montana Riecken-Lyons-Decatur NE - Since this may be the last year of Lyons-Decatur NE playing as they are known today, Riecken is making himself known wearing the good old Maroon, White, and Gold Cougar uniforms. In a 70-44 loss to Osmond, Montana toted the ball 28 times, rushed for 190 yards and scored 3 touchdowns. That brings his 3 game total to 596 yards. He rushed for 304 yards in that 84-60 opening win over Parkview Christian, you know.

*Matt McCarthy-Garden County - First of all, Garden County is the "Running Back High" of Western Nebraska. Here's one reason why. In that 50-30 Maxwell win where Ryan McKeeman of Maxwell ran for 265 big ones? Well, McKeeman had 32 carries to reach that total. Matt McCarthy ran only 22 times and bolted for 331 yards in that game. He scored 3 times too. McCarthy, who rushed for 1,205 yards last season as a sophomore, has already accumulated.........be seated please.......2,163 yards and 55 touchdowns! Just a day's work at Garden County. In 2 games this fall, Matt has 479 yards on the ground.

*Hunter Reimers-Palmer - That #1 on his jersey stands for Number One Tackler. In just 3 games, the 170 pound junior has been in on a whopping 63 tackles and 37 of those are solos. The Tigers have won only once, but they know how to teach the art of tackling up there. In the opener against Emerson-Hubbard, Reimers had 27 tackles. Last season when Palmer won only 2 games, but Reimers made 147 stops.

Well, a couple of 11-Man teams had a little get together in DuBois, Pennsylvania last Friday. It really couldn't have been too shabby of a deal because DuBois has their own artificial turf surface, complete with their school name in each end zone. Here is what went down in that game with the aforementioned DuBois High School and a Meadville squad.

1st quarter score, tied at 28. DuBois jumps in front 56-51 at the half. Remember this is football. Meadville forges into the lead 85-82 after three quarters. And wouldn't you know it, DuBois got tired and gave up in the 4th quarter and Meadville pulled away for a 107-90 win. Here's the kicker, and this gets really good.

Meadville Bulldog running back, Journey Brown, a 5-11, 180 junior carried the ball 22 times, rushed for 722 yards and scored 10 touchdowns. Ooohhhh and out come the naysayers and Doubting Thomases. One problem with that though. The National Federation of State Highs Schools Assn. has reviewed the game and verified the record (s). The National High School record for yards rushing in a single game, by the way, is 754 yards.

After all the films were reviewed, Journey Brown was given credit for 720 yards, 341 coming in the 1st half. Looks like he had some gas in the tank for the 2nd half!

Funny thing was, DuBois quarterback Matt Miller overshadowed that by passing for 782 yards. After review, it ended up 741. Good Lord. How long did the game take, 2 days?

Have 6 minutes to spare? Here is the game film showing all 28 touchdowns in the game!