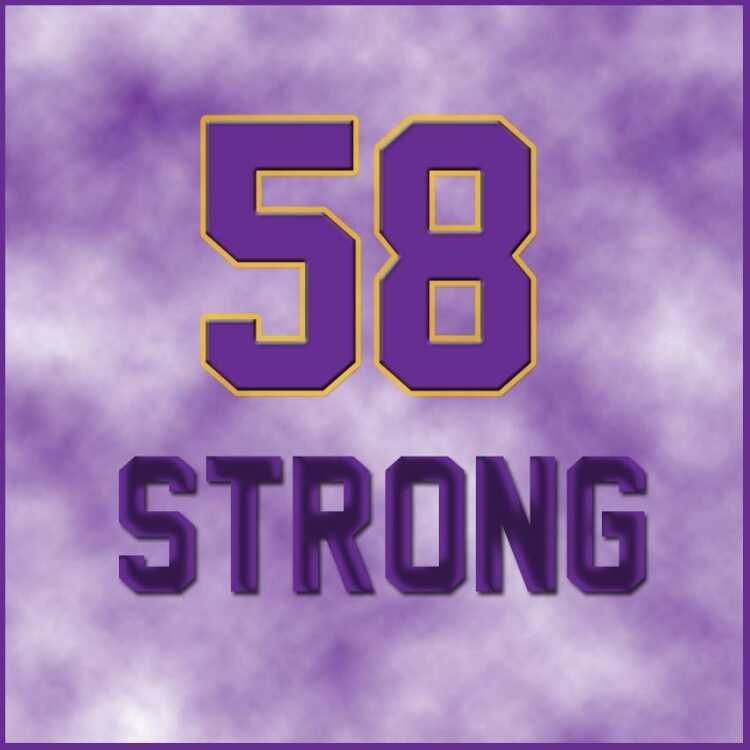 Some came from near, others from afar, some couldn't be there, and a few were just remembered, but it was a big night at Memorial Stadium in Grand Island Friday night. The first ever Grand Island Senior High Football Hall of Fame was in town to be honored at halftime of the Islander/Omaha Burke contest. Legendary Islander names like Tom Rathman, Ken Fisher, Bobby Reynolds, Claire Boroff and others were there to be introduced and appreciated by the overflow crowd and the GI football team as well.

The Bulldogs from Omaha Burke gave Grand Island all they could handle in the first half, but a back-breaking, ego deflating 80 yard touchdown by Adan Redwine right up the gut, may have sealed the win for the Islanders.

Grand Island defense smothered Burke's go-to running back, Quincy McKelvy most of the first half. It wasn't until the junior's 7th carry of the evening, that he would reach positive yardage. Meanwhile, the Islander defense was rock solid and the special teams put one on the board to start the scoring in that opening quarter.

With 3:44 remaining in the first quarter and Burke backed up in the shadow of their own end zone, Bulldog punter Alec Ellis launched a frozen rope boot to the Burke 45 yard line. Speedy GI split end Tanner Cook fielded the Ellis punt, cut to his right, then headed down the Bulldog sideline for a nifty 45 yard touchdown. Juan Cayax added the PAT and Grand Island was up 7-0.

The Bulldogs tied things up with 8:17 left in the 2nd quarter when 6-4, 180 pound freshman Chris Hickman caught an 8 yard TD pass from quarterback Jackson Abramo. Not too often you see a freshman get into a Class A game, let alone score a touchdown.

Grand Island would hit the board again 4 minutes later after putting together a nice 80 yard drive. Adan Redwine blasted into the North end zone from 10 yards out with 4:38 showing on the clock to cap the possession. Quarterback Trey Kissack had two critical runs for 1st downs in the drive, taking some pretty tough licks in the process.

With only 59 seconds showing on the clock until halftime, Burke may have been thinking the Islanders would be content in running out the clock with the ball on their own 20. Instead, the Islander O-Line and Adan Redwine had other thoughts.

On the very 1st play from that 20 yard line, the Grand Island offensive opened up a Nick Galvan type hole for Redwine and the senior blew through the opening like a cannon shot, outrunning the stunned Bulldog defense for an 80 yard touchdown shocker. Just like that, the Islanders had a 21-7 lead heading into the halftime break.

There was good news on the Islander's 1st possession of the second half. The first play from scrimmage on the GI 20, Adan Redwine bolted through the middle for an 8 yard gain, but re injured his bad knee on the play. Redwine had to be helped off the field by the Islander staff and did not return. The good news was the Islander line took command immediately after halftime, blowing huge holes in the Burke line. Things did not change after the Redwine injury and Grand Island continued the 80 yard drive to score on a 8 yard Troy Kissack sweep. Just 5:06 into the 3rd quarter, GI had a 28-7 lead.

Omaha Burke gambled on the following possession and executed a 4th down fake punt with Alec Ellis bulling ahead for the 1st down. The celebration didn't last long. A few plays later, Islander Keenan Ketteler stepped in front of a Jackson Abramo pass for an interception at the Burke 40.

Burke got the ball right back a few minutes later when a Troy Kissack pitch was not handled and a Bulldog pounced on the loose ball. That celebration was also brief and a heartbreak for the 'Dogs as well. Abramo completed a short pass to Ellis, but he had the ball stripped and the Islanders were back in business at the Burke 47.

Chris Doty, who came in and ran extremely well, eventually scored on an 11 yard run to give the Islanders a 35-7 lead heading into the 4th frame.

Although the Islanders did not score in the final quarter, the line continued to block well, creating nice openings for the reserve running backs, especially 160 pound Chris Doty. The senior ended up rushing 10 times for 86 yards in the contest.

Omaha Burke did manage to put a late touchdown on the scoreboard when backup quarterback Tyler Chadwick fired a 16 yard scoring strike to Payton Henderson with 2:09 remaining in the game.

Leading the way on the ground for Grand Island was Adan Redwine, who for all practical purposes, played only a half, plus one play. Redwine ended the night with 118 yards on just 6 carries before leaving with the knee injury. Islander quarterback Troy Kissack continued his 2015 success by completing 10 of 17 passes for 145 yards with no interceptions. Big George Oxford also ran hard, racking up 49 yards on 10 touches.

Omaha Burke coach Paul Limongi really rotated the running backs in this game with 8 players carrying the ball at least one time. Not one back hit 30 yards though as the stingy Islander defense throttled the Bulldogs to the tune of 153 yards on 41 tries, only 3.7 yards a pop.

QB Jackson Abramo was able to complete 12 of 21 passes for a 169 yards and a score. The Bulldog senior was picked off one time.

Grand Island will travel to Columbus next Friday night before travelling further East for a marquee matchup with Omaha Westside on September 25th.

Burke will travel to Omaha Central next Friday to face a consistently improving Eagles team.

It was a night this Grand Island football family will never forget. The Islanders overcame one of most imposing, gut wrenching, emotionally draining tasks they will ever face as young men. The team set out on a mission and conquered. But don't be fooled into believing that this Islander team won on emotions only. Most knowledgeable prep football followers know, just like Nick Galvan did, that this football team is well coached and well prepared in all phases of the game of football. Grand Island is a top notch football squad with a well oiled defense, buoyed by 8 returning starters who have been in big games and an offense that is improving in each and every game.

These young men also realize that the heartbreak and sorrow of losing a very special teammate will not go away soon, probably never. There will be future games they will have to dig a little deeper than usual to come out on top. No easy road.

But this 2015 Grand Island team has two glaring positives going for the entire group. One of the best coaching staffs in the state who has prepared them better than none other, and the everlasting, fresh memory of a young man that inspired an entire high school football team from the day he put on the pads.

Islander football family, If things ever seem to appear a bit foggy or unclear at times on future Friday Night Lights excursions, just look up above those glorious lights, at the end of that double rainbow, and you will see your inspiration...................................58 Strong.

He will always be there.