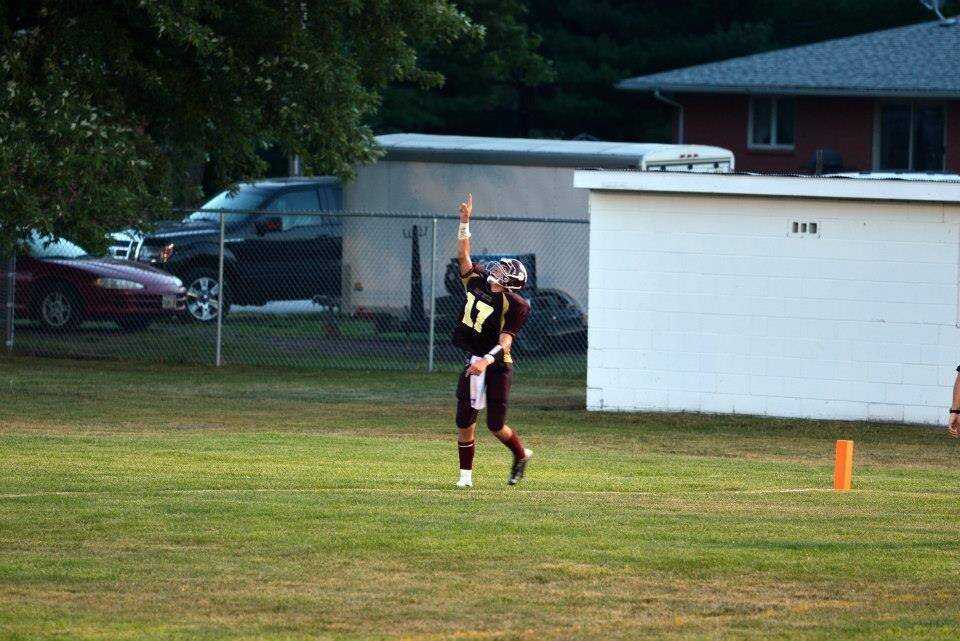 East Butler's Skyler Ratkovec (now #4) did it all against Nebraska Christian last Friday.

Opening week in Nebraska high school football produced some statistical explosions in both the rushing and passing departments. Running backs going the distance on the 1st play from scrimmage, a couple of 300 yard rushing performances, a Class C-1 record for most pass completions in a single game.....it just couldn't get any better.

We have so many outstanding marks on this opening weekend, it will take two installments to cover them all. My motto is to give credit where credit is due and no mark goes without mention if I can help it.

Let's get right to the good stuff, shall we?

*Cooper Rogers-Holdrege - 305 Yds-25 carries, 3 TDs - One of the swiftest sprinters in Class B, Rogers finally took advantage his opportunity on the football field after missing all of 2014 with an injury. The Holdrege flash went 80 yards for a TD the first play from scrimmage on his way to the 300+ night. Rogers broke loose for scoring runs of 61 and 34 yards later in the game to lead the Dusters to a 34-21 win over Gothenburg.

Tyrell Younger-Bertrand - Playing only in the 1st half, the talented senior blitzed Sutherland to the tune of 254 yards on 17 carries and 7 touchdowns. Younger also scored on the 1st play from scrimmage as the Vikings sped to a 58-12 lead. Bertrand won the game 68-20.

*Blake Kaiser-Wahoo - Warrior junior tied a C-1 record by kicking 4 field goals against Ashland-Greenwood last Friday, including what would be the winning 24 yard boot in overtime. Kaiser also nailed a 27 yard FG with 7 seconds remaining in regulation to send the game into overtime. Wahoo upset pre-season C-1, #1 Ashland-Greenwood, 45-42.

*Triston Fairchild-Papillion La Vista South - The smooth as silk 190 pound back ran for 224 yards on 34 touches and 3 TDs in the Titan's 34-16 dispatching of Omaha Burke. Fairchild, who may may be the best back in the state, could be the first Nebraska prep runner to 2,000 this fall. Such a fine football player.

*Max Mason-Scottsbluff - New kid in that Bearcat backfield, Mason sprinted for 207 yards on only 11 carries in Scottsbluffs 41-0 win over Lexington. Mason, who is the third back in for the 'Cats, scored on runs of 45,3, and 19 yards in the contest. He's only a junior.

*Skyler Ratkovec-East Butler - The 170 pound senior quarterback couldn't have done much more to aid his team in a 56-20 win over a good Nebraska Christian team. Ratkovec rushed for 217 yards on 28 carries and 4 touchdowns, completed 13 of 19 passes for 205 yards and another 3 scores, and made 16 tackles on defense. Oh, and he also picked off two passes. Good grief, what do you do for an encore, drive the team bus?

*Derek Renner-Battle Creek - Stepped right into Jordan Zautke's shoes and ran for 237 yards on 22 touches and a touchdown in the Braves opening night 19-6 win over Stanton. Renner, who rushed for 850 yards a year ago, and 519 as a sophomore, already had 161 yards at the half. Keep an eye on this guy.

*Bryce James-Kearney Catholic - Came through big time in the Stars 35-32 win over a very good Ord team. The slippery James escaped for 185 yards on 17 carries and scored touchdowns on runs of 53 and 70 yards and also brought back a kick-off 94 yards for another. Opponents on the gridiron and the hardwoods have to think this kid has been around for 7 years. I like this kid a bunch. Game breaker.

*Trey Kissack-Grand Island - Took the QB reins for departed senior dandy Pierce Almond and led the Islanders to a huge 20-12 victory over bitter rival Kearney, and on the road to boot. All Kissack did was complete 22 of 30 passes for 250 yards (73%) for all three of the GI scores. "Kool Hand Kissack" is going to bring that offense along quicker than opponents care to think about. Coach T is digging that.

*Christian Ellsworth-GI Northwest - D-1 prospect displayed his skills in an impressive 34-8 against Adams Central. Ellsworth was true on 19 of 30 tosses (63%) for 303 yards and 2 TDs, despite being sacked six times in the first half. You will not see minus rushing yardage for this guy again in 2015 and the passing yards are just getting started. This kid's throwing mechanics are mighty sweet.

*Tanner Lamoree-Cross County - This dude makes every touch of the football count. In a 66-14 victory over McCool Junction, Lamoree rushed 8 times, gained 188 yards and scored on long distance jaunts of 52, 57, and 63 yards. The 160 pound junior also made 10 tackles, 2 of which went for losses.

*Luke Ericson-Osceola - Right down the road from where Cross County played, Big Luke was puttin' a hurt on Meridian, 62-32. Oh, he had help, but Ericson rushed 19 times for an even 190 yards and 5 touchdowns. Luke also completed 3 of 6 passes for 44 yards and a score and even caught a 21 yard pass. Osceola is good folks.

*Tristan Anderson-Omaha South - The Packers unleashed their own "Triston" in the form of 5-9, 165 pound, Tristan Anderson. In a 50-0 whitewashing of Omaha Bryan, Anderson ran for 246 yards on a mere 15 carries and scored three TDs, the longest coming from 35 yards out. South needed a good running back to compliment the receiving corps of Noah Fant and Monte McGary. Anderson is not really a newcomer, having rushed for 456 yards a year ago.

*Grant Fox-Aurora - How about this quarterback's first varsity start? He led his Huskies to that field at Doane College and blitzed Crete to the sweet tune of 23 of 35 passes, 283 yards and 4 TDs. Aurora bested Crete 40-21 in that opener for both schools. And his favorite target? You guessed it, D-1 prospect Todd Honas, who hauled in 8 of Fox's aerials for 108 yards.

*Preston Dibbern-Aurora - I told you to watch out for this junior. The 173 Dibbern handled the rushing chores for Aurora just fine, running 17 times for 131 yards and a 44 yard TD run. Pretty slick pass/run combination for 1st year head coach Kyle Peterson over there in the land of good drummers.

*Sam Zeleny-Exeter-Milligan - 5-8, 175 pound Quarterback/team leader did nearly everything in a nail-biting, top notch opening win against Kenesaw. In the 46-40 overtime thriller, Zeleny connected on 12 of his 18 passes for 194 and 3 TDs, rushed 20 times for 69 yards and three more TDs, made 12 tackles on defense and returned a kick-off for a score. I wonder if the Timberwolves are still going to be good this season?