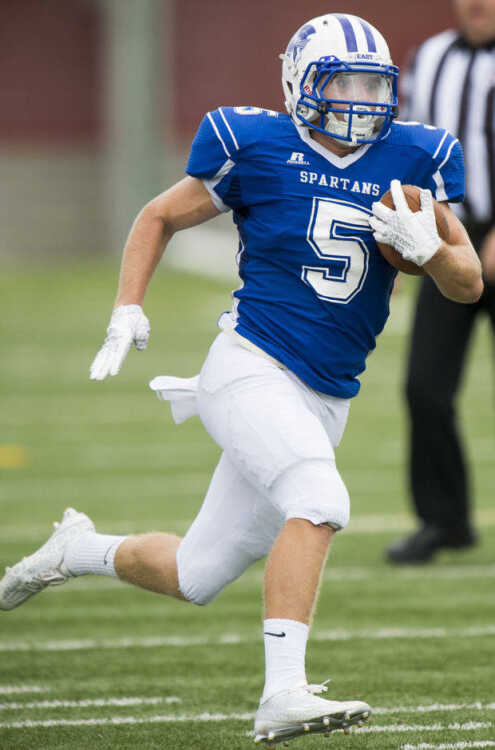 Lincoln East digs in to win 28-13 opener over Bellevue East.

The Spartans may have gotten more than they bargained for from Bellevue East, but when the going got tough, Lincoln East pulled the straps a little tighter and came away with a 28-13 season opening win. It was the 1st game of a double-dip at Seacrest Field in Lincoln, and despite the 4:30 start, 2,800 fans showed up to witness the battle.

It was certainly a contrast of halves, take away the first play of the second half, and most certainly a stark contrast of offensive styles. Most of the offense took place during the opening half as the teams battled back and forth. It was the solid ground attack of Lincoln East versus the Air Raid show of the Chieftains.

Between the passing game and the bizarre number of penalties, especially the exorbitant of pass interference calls, it was a long contest causing the nightcap to have a late start and an 11:00 conclusion.

The Spartans hit the board first with 5:17 left in the 1st quarter, when hard running senior Jack Cobb burst through a nice hole on the right side and galloped 43 yards for a score. Cobb, a 5-11, 210 pound physical specimen, would finish the night with 115 yards on 10 carries and a score.

Bellevue East answered back with just 44 seconds left in that opening quarter when Abe Jackson skirted in from the left side of the Chieftain line. The Spartans had Bellevue East stopped at the 9 when a Dillon Hike pass fell incomplete, but Lincoln East was called for roughing the QB, and Jackson scored on the very next first down play. The extra point try was wide.

The Spartans built a little cushion in the 2nd stanza, thanks to the running of 182 pound senior, Nathan Netz. Three minutes 11 ticks into the 2nd quarter, Netz walked in from 5 yards out to give LE a 14-6 lead. Netz scored again just 1:45 later when he blasted in from the one. John Brady's point after gave the Spartans a 21-6 lead with 7:05 left in the half.

Good looking senior QB Jack Hike lofted a soft flat pass to WR Bruce Windorski, who then flipped a perfect pitch to a streaking Austin Black. The senior then skirted the east sidelines for a nifty 40 yard Houdini-type TD. The half ended with Lincoln East up 21-13.

Apparently the old fox himself, John Gingery, thought his Spartans should answer right away in the second half, and that's exactly what transpired. Lincoln East took the opening kick-off and marched 74 yards for a score in just a minute, 42 seconds. Nathan Nitz really got his wheels going on the drive, capping it off with a pretty 18 yard sweep around the right side for a touchdown. Netz was not touched on the run.

The score put Lincoln East up 28-13, which would hold up for the final count.

In all my years of watching high school football, this may have been a record for pass interference calls. There were three on the Bellevue East drive following Nathan Netz second half opening TD. The Spartans were flagged for 130 yards and Bellevue East, 102. Those marks will undoubtedly improve as the season rolls along.

Lincoln East unleashed a terrific running game in the contest, grinding up 325 yards on 43 attempts, a 7.6 per rushing pop. Cobb's 115 led the way, and Nathan Netz followed with 96 yards. Netz was up to a 100, but lost 4 yards on his last carry. The Spartans used two quarterbacks, junior Max White (#7) started, then Carson Walters (#13) took over. Carson rushed for 62 yards on 7 carries, while White did get back, running for 43 yards on 9 tries.

Bellevue East quarterback Dillon Hike put the ball up a staggering 49 times, completing 29 for 218 yards. Hike suffered only 2 picks in nearly 50 tosses. Austin Black caught 5 aerials for 59 yards, and junior DB Ronald Thomas was a demon in that Chieftain backfield, defending passes and snaring an interception.

Chieftain quarterback Jack Hike really impressed me and could cause everybody in the Metro headaches this season. This is a team that should improve.