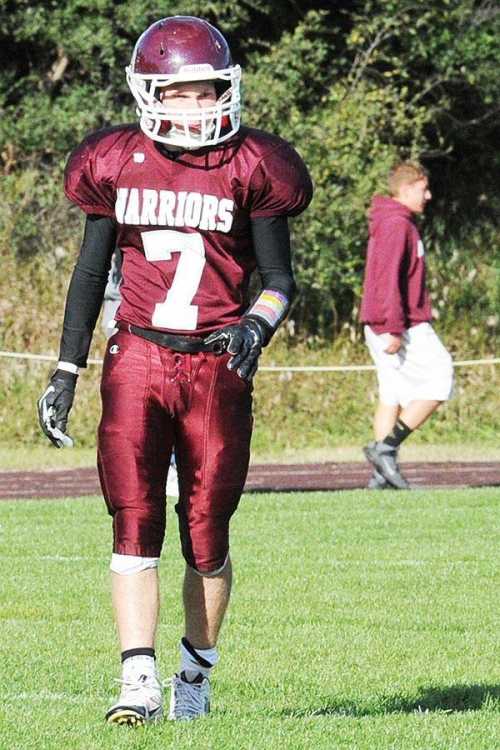 Neligh-Oakdale's outstanding junior, Grant White. He does it all.

This class is loaded with so many good quarterbacks, we're doing a feature on those stars all by themselves. Ditto for the receivers in this class so we'll do a separate feature on them as well.

*Grant White-Neligh-Oakdale (#7) - 5-10, 140, (Jr.) - 146 of 246 - 2,089 Yards, (62% completion) 25 TDs (7 INT) *Dual Threat QB* - Alright, this kid was a sophomore a year ago and you see the stats above. I'm not certain what system MaxPreps uses for Quarterback Rating, in otherwards,Passing Efficiency, but they list Grant White's QB Rating at 113.5. Most high schools around the country use the NCAA rating and here is how it works. Now don't be concerned by the complexity of this formula because I'm just trying to make a point. Here is that NCAA formula: Completions per attempt times 100, Plus, Touchdowns per attempt times 330, plus, yards per attempt times 8.4, minus, interceptions per attempt times 200. There is a table on a site called http://www.prepqb.com/quarterback_rating, but anyway, Grant White's QB rating by using this table would be 154.46. The NCAA record is 186.0 by Hawaii's Colt Brennen. That tell you something about Mr. White, who is only a junior?

Also remember, White rushed for 536 yards plus an additional 10 Tds and also returned a kick-off 71 yards for a score against powerful Fullerton a year ago. To boot, Neligh-Oakdale is just absolutely loaded with returnees this fall. Tremendous junior class that will make this team a tough draw this fall.

*Trey Taubenheim-Amherst (#3) - 5-9, 175, (Sr.) - 94 0f 144 - 1,725, 33 TDs (6 INT) - And you thought Grant White's completion percentage was good? And you thought Neligh-Oakdale was loaded this fall? You "ain't" seen nothin' yet. Trey Taubenheim completed 65% of his passes a year ago, and from every imaginable position, angle, and spot imaginable in that Bronco backfield. He also rushed for 537 yards and 6 scores, nearly similar to White. There is a difference in weight though.

Trey Taubenheim may be closer to 180 and really delivers a blow when he runs the ball, especially if the first down marker is within reach. The talented senior has been a starter at QB since his freshman season and ditto for point guard in basketball. From his defensive backfield position, Taubenheim has made 40 tackles and an unheard of 35 of those puppies were solos.

With nearly everyone back, plus 215 pound tight end transfer Peyton Call (Mullen), Taubenheim is set to put up some unreal numbers this fall. 6 starters return on either side of the ball and so many skill players in those Bronco Reds will make Taubenheim and his buds awful tough. And I don't care how far behind this team gets in a football game, they are never out of it. Ask Fullerton about that one.

Sikes will have a rebuilt line in front of him when the season opens Sept 4, but super coach Luke Gideon should take care of that. The line will be relatively new, but man do the Longhorns have some fine skill people returning this season, one of which is Victory Sikes favorite target, Ty Chaffin. Sikes and Chaffin hooked up for 884 yards and 16 TDs in 2014. Thats a lot of real estate and points. In the regular season finale showdown against unbeaten Amherst, Sikes and Chaffin connected for 201 yards and 4 scores in the 'Horns 52-48, pardon the pun, victory.

It's very possible Sikes could flirt with that 2,000 passing mark this fall and lest we forget, Sikes rushed for over 500 yards in 2014 too.

*Zach Martin-Clearwater-Orchard (#21) - 5-11, 165, (Sr.) - 92 of 177 - 1,458 Yards, 19 TDs (11 INT) - Have to tip your hat to Martin for putting up those numbers for a 1-7 football team. Martin is a tough kid for his size and an excellent player in that Cyclone defensive backfield, recording 71 tackles a year ago. Martin missed being a 1000 yard passer his sophomore year and has 2,406 yards in just two seasons as Clearwater-Orchard's starting QB. Zach won't run on you much but can throw with good precision and with 6 starters returning on both sides of the ball, his stats should improve even more this fall.

Maverick has been a starter since his freshman season and when I watched his game film I thought I was seeing a senior. The game film I had witnessed was his sophomore highlights. Sukstorf is so definitive with his passing, dropping back three steps, firmly planting his feet, and firing tight spiral bullets to a receiver. The dude knows his receivers routes like the back of his hand and last season, a 4-5 campaign, Maverick was true on 62% of his passes. Matter of fact, 2 years ago as a sophomore, Sukstorf still hit his throws at a 56% clip even the Wildcats were only 1-7.

Maverick Sukstorf does not run a lot but when he decides to tuck and go, he does it with authority. Last season's 4-5 record and a playoff appearance was sweet for a once proud program that had suffered a 5 year drought which saw Cedar win only 4 out of 40 football games.

Cedar Bluffs may just win District 1 this fall and Sukstorf may just get some heads spinning with his stats this fall. I like this young man.

*Kobe Paprocki-Clarkson-Leigh (#6) - 5-10, 160, (Sr.) - 63 of 125 - 1,163 Yards, 15 TDs (7 INT) *Dual Threat* - Any quarterback that does well against teams like Howells-Dodge, Fullerton, Nebraska Christian, and Humphrey/Lindsay HF in that mean District 5 is doing something. Paprocki throws a nice pass, but will certainly miss Chris Konicek, one of the best all-around football players in all of 8-Man football. But, I think Kobe Paprocki will continue to post good passing numbers in a brutal district and certainly benefits by having a coach like Jim Clarkson, one of the finest coaches in 8-Man football.

*Kadin Copeland-Sutherland (#6) -5-10, 170, (Sr.) - 65 of 150 - 806 Yds, 12 Tds, (5 INT) - *Dual Threat* - Truly amazing Copeland accumulated the kind of stats he did against a back breaking schedule that included Maxwell, Paxton, Elm Creek, Hemingford, and Fullerton. And Sutherland Still made the playoffs with a very young team. Kadin is a southpaw with a quick release and a young man who makes good decisions when the "pass or run" question arrives. Very sharp delivery and some misleading stats as far as passing is concerned.

Copeland completed only 43% of his passes yet his touchdown/interception rate is not that bad at all. This tells me many of his throws were online but either knocked away, dropped or simply defended well. This is a good quarterback folks, and a QB that can run the ball to the tune of 675 yards, 5 TDs, and an average of 7 yards a pop.

*Duncan Hanzel-Humphrey-Lindsay HF (#12) - 170, (Sr.) - 56 of 110 - 800 Yds, 12 TDs (5 INT) - Another quarterback that spent the year facing teams like Howells-Dodge, Fullerton, Nebraska Christian, and Clarkson-Leigh. Rushed for 5 touchdowns and made 60 tackles on defense where he also intercepted a pass and recovered 3 fumbles. Hanzel was All-District in a star studded district and that's saying something. H/LHF also has one of the finest coaches around in Bill Mimick. True gentleman and an incomparable teacher of the game and life skills to young men.

*Tyler Polacek-Howells-Dodge (#10) - 5-10, 165, (Sr.) - 39 of 72 - 572, 5 TDs, (5 INT) *Dual Threat* - Simply put, Tyler Polacek has two things going for him that are invaluable and not found anywhere else. Playing for Howells-Dodge and being coached by ghe one and only Mike Spiers. Not many men I respect more than Coach Spiers and I know a 6-4 record was awful hard on this soon to be coaching legend. But this Polacek lad is a good one. The Jags don't throw much, but Tyler can throw like a seasoned passing QB when he has to.

Let's face it folks, I don't care who you are, if you are going to play for Howells-Dodge and Mike Spiers at any position....ANY position, you better be tough, especially at the Quarterback slot. You'd better be able to run the ball, execute fakes, and when you pitch it on a sweep........lead the way and block like a lineman! Tyler Polacek does all of it. I saw him against Fullerton last fall. He backs down to nobody, is a tremendous field general, and a rough/tough, intelligent defensive football player.

Last season Polacek made 55 tackles from his DB position, intercepted 5 passes, recovered 2 fumbles and caused another. Just something that is expected from a Jaguar football player. You think Howells-Dodge is going 6 and 4 in this fall? Guys like Tyler Polacek will make sure that memory is erased. Count on it.

*Will Meyer-Fullerton (#13) - 5-11, 180, (Sr.) - Last season Meyer accounted for over 1,130 yards of total offense for Fullerton, but I'm hearing Mr.Meyer may just be moving to the featured running back position for 2015. And with an offensive line that just may be one of the best in all of 8-Man One football, Will Meyer is going to make that 1000 Yard List without a ton of trouble. Seasoned player who was also an outstanding bone crunching linebacker as a sophomore.

Meyer is going to be a team leader for Fullerton and will do a very good healing job for the Warrior faithful who will miss the incomparable Garrett Sonderup. This young man is a very, very football player folks. I'll be telling you about those Fullerton lineman next week. Top notch crew for sure.