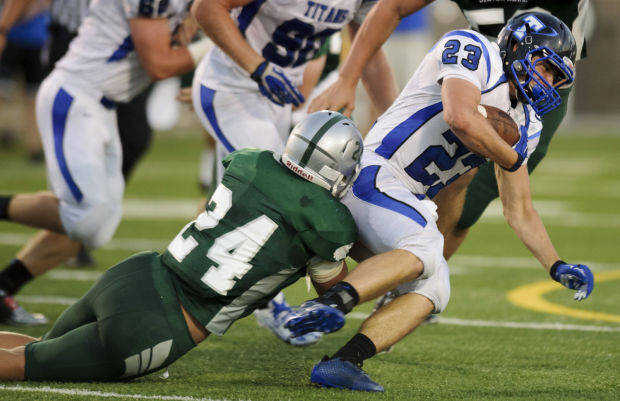 It is exactly one week until the opening of high school football practice in the state of Nebraska. It's merely been a waiting game for many of us since late November of 2014. In this series, we'll take a glance at the returning 1000 yard rushers in each class, plus runners that are expected to make an impact in the Nebraska prep football picture this fall.

May as well shine the bright lights on the returning 1000 yard passers, quarterbacks who may hit the mark in 2015, and their favorite targets, which could include backs as well as receivers. We'll do this class by class beginning with the Class A big boys.

And speaking of the big boys, let's give a little love to the men in the trenches that make all of this possible for the skill position players. Oh, and by the way, I could never figure out why lineman did not come under the category of "skill position" players. You're looking at one dude who wouldn't dare think of telling a player like Omaha Central's Connor Pavlik that he isn't a skill player. Not me man.

Papillion LV South, plain and simple, has a 550 HP Jaguar XF in their backfield in Triston Fairchild. After playing in the shadow of 2,000 yard runner Drew Klein his sophomore season, Fairchild stepped into the featured back role in 2014 and never missed a beat. Number 23 toted the ball a staggering 281 times in 12 games a year ago and put up 1,540 yards and 19 TDs rushing while leading the Titans to within one game of the Class A state title contest.

Fairchild has a superabundance of physical assets when he gets the football. Blessed with deceiving speed, Triston hits the hole in a hurry and is a glider and slider who follows his blockers as good as anybody in the state. One of the smartest football minds in Class A, Fairchild wastes no space and always takes the straightest beeline to the end zone.

This kid has good explosion at the point of impact and covers up the ball securely when he hits that defensive line. Fairchild uses his leg strength to explode into the secondary with a rush and is rarely stopped by the first wave of defenders. Triston will miss the blocking of departed seniors Jeremy Kowalski and Steve Zagurski, especially Kowalski, who may have been the best blocker in Class A.

If Fairchild gets his blocking, he will be a 2000 yard rusher. He's that good.

Jake Matthew is one of the best football players in Nebraska, period. Already with 5 Division One offers in hand, plus Kansas State and Iowa very serious, Matthews is clearly a hot college prospect. Picture yourself as a defender seeing a 6-3, 230 pound freight train that runs a 4.54 forty, barreling full steam ahead in your direction. No thank you.

Matthew, at times a single back (FB) in the Mustang offense, gets the ball with the defense knowing it's going to happen. Nonetheless, #33 hits the hole quickly and is ungodly strong with superior leg strength and a vicious stiff arm. Jake Matthew runs with a low pad level and looks like a long striding 400 meter man when he gets to open spaces. Shedding would-be tacklers as he goes, the Mustang powerhouse is nearly impossible for any single defender to tackle one-on-one. Matthew is also a vicious blocker and relishes the role, mowing down defenders with ease on sweeps.

On the "D" side of the ball, he is a brutal tackler playing DE who gets to the quarterback in a hurry. The rock solid, intelligent senior just destroys blockers on jet sweeps to get to that ball carrier. A coaches dream is Jake Matthew. Just ask Freddy Petito.

Prather was not only a pleasant surprise for Knights head coach Ryan Gottula a year ago, but was a shining star on a football team that finished only 3-6. Martiez, a transfer from Lincoln High a year back, had an experienced O-Line in 2014 and an outstanding blocker in Fyn Anderson who helped propel him to an 1,100 yard season. Prather has breakaway speed and knows how to lower his head at the point of contact. Slippery when running in traffic, #2 is good in open spaces and will outrun most Class A defenses if he gets a step. Very fast, 10 pounds heavier and an inch taller, Prather should flourish in the Knights offense this fall.

Mr. Lambert is in elite company in Fremont high school football history, becoming only the 5th player in Tiger record books to rush for over a 1000 yards in a single season. Playing on a 3-6 team, the swift running and wrestling tough junior rushed for nearly 1,100 yards while adding 9 touchdowns. Fast enough to be on Fremont's state qualifying 400 meter relay team, Sean Lambert is a dangerous kick return man, bringing two back for scores a season ago.

Lambert is a weaver in and out of traffic with fine vision, and has a low pad level when he approaches contact. Hitting the hole quickly when he receives the ball, Sean has good balance and wiggles his way for good yardage after being hit. Blessed with good vision, Sean Lambert will have a big experienced line to run behind this fall, which is bad news for Tiger opponents. Wrestling in the 182 pound division, the lean and solidly built Lambert made it to the semifinals in both his sophomore and junior years.

This could be a banner year for Lambert and a long awaited winning year for the hungry Tigers.

Playing for a team that has won only 3 games the past six seasons, and is 11-97 the past 12 years, Phipps earned his yards a year ago. He rushed for 957 yards in only 8 contests and averaged 7.14 yards a pop. Short in stature, Phipps has good strength and nice power for an underclassman. Over half of his yards (518) came in 2 games, Omaha South (210) and South Sioux City (308). This youngster earns every one of his yards and you have to like the young man's toughness.

One of the most dangerous players in the state is Mr. Kellogg, who can score from anywhere on the football field......and has. Kellogg plays the slot position in the Mustang offense and loves to take the pitch coming back to the left side. He is also very dangerous catching short passes out of that Millard North backfield which basically gives his lineman more time to block. Ouch.

Adrian Kellogg has unlimited potential and you will see more of that this fall. At times last season, the junior seemingly had another gear that he only employed if he was pressed. You just knew it was there and I have a feeling young Mr. Kellogg has matured a ton and opponents will see that high gear a whole lot more that they like. And like Jake Matthews, #21 will benefit from one of the biggest offensive lines in recent history for Fred Petitio's Mustangs.

Well, it's like this prep football fans. When you play behind the most prolific single season rusher in Nebraska high school history, you just are not going to get many touches. When Seals did get the opportunity, your jaws dropped. Short and lightening quick, this kid is through the hole and gone to the races before the defense even knows who has the ball.

Seals broke a long run each of Omaha North's first 5 games a year ago, subbing in for Calvin Strong. We're talking runs of 66, 69, 49, 51, and 80 yards. Tavion has very quick feet, can change directions in a heartbeat, and owns above average speed. Even though Seals benefitted from superior line blocking, he demonstrated the ability to wiggle free out of piles and pop off of would-be tacklers with great balance.

The well isn't that dry for Omaha North this fall either, so expect big numbers from Tavion Seals. If there is a chink in the armour here, it would be Tavian's ability to hold on to the ball. Not a major deal yet though.

Seems taller than 6-1 the way he handles himself back there at the QB slot. Anderjaska is an excellent roll out quarterback as well as pocket passer. The lad is very dangerous, especially on the roll out when he tucks and runs. Logan is a glider that just slips by tacklers with a very fluid slither that gets him past a defender(s) with an ever-so-slight sideways movement. Should propel the Mustangs to a very good 2015 season. Kirk Peterson has some guns at Millard West this fall.

Hits the hole as quickly as any back in the Metro. Absolutely loves to bounce off and get to the outside and if you're on defense, that's not good. Powerful legs, great speed, and good spin moves, Jaylin Bradley knows how to churn for those yards after contact. Perfect back for a predominately passing team that constantly keeps the "D" on their toes. Bradley would be a 1,500 yard runner in Fred Petito's offense and he's only a junior. Jaylin Bradley is way better than you think.

Rivals didn't list this kid on their top 106 players in Nebraska. Are you kidding me? Pure football player that can play anywhere on the field.....and did. Head hunter at DE/LB that gets to the quarterback or running back while shedding blockers like a video game figure. Runs very hard, cuts well, has good speed and bowls over tacklers. Has a nose for the end zone. r Noah Urbanek returns kicks, has good hands catching passes out of the backfield and really follows his blockers well when he gets the ball. He just has that stride like a 400 meter track star. If you haven't heard about Noah Urbanek, just wait until around August 28th. He's only a JUNIOR folks and played like a senior a year ago as a sophomore.

That's 600 yards and 10 scores in FIVE games. That is correct. Not sure if an injury came into play, but Shuler is a pretty nice back that packs a punch for a small guy. Schuler has a nose for the goal line when Millard South gets inside the 10 yard line, is a good pass blocker and is a slippery runner in open spaces. That's a lot of yards and TDs for only 5 games.

Tough kid. I was fortunate enough to see Ball play last year and he loves to roll out when he throws the pass. Also makes quick decisions when he is pressured and takes off down field in a hurry. Packs a punch at the point of contact. Should be even better with a year under his belt. Ball was fast enough to run a leg on the Gator's 1600 meter relay that clocked a 3:25.9. Good dual threat quarterback which is lethal in Class A.

Season came to an unfortunate halt very early last year with a broken jaw. Nothing fancy about Duryee's style, just good, tough nose running with :11.3 hundred speed and solid yards after contact. Proved his worth by running for 150 yards on 28 carries against Creighton Prep. Would have been a 1000 yard rusher for sure if he had stayed healthy. Watch out this season for Omaha Westside's number 33 and be assured he will get the ball a ton and handle it for a thousand yards and much more. Touch customer and highly intelligent football player.