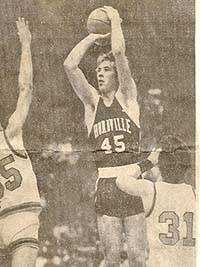 1981's Junior class, especially in Class A, may have argueably been the best class ever to hit the basketball hardwoods in Nebraska prep basketball history. The names on 1st Team Super-State are simply mind boggling. You will want to relive this season in Nebraska High School Basketball.

Here are the class by class State Tournaments at a glance.

*To celebrate 1981's sparkling array of talent, and just for a rare treat, we are going to list the starting lineups for each team in the '81 state tournament in each class. If any season deserves to have these athletes saluted, this would be the one.

So without further adieu, here is a look at the Class D state tournament teams and their starters:

*No reason to believe Filley couldn't win it's 3rd title in a row when this tournament began. Filley received a favorable draw with Harrisburg and took advantage with a 57-41 1st round win. Ken Dragoo and Lance Michaels led Maxwell to an old fashioned western shootout 72-71 win over Trenton. Tourney co-favorite Hordville turned back Axtell 63-51 and a youthful Henderson squad shocked many by sending unbeaten, tourney veteran Clearwater home with a 70-55 loss.

Filley took another step toward that 3rd consecutive title by besting Maxwell 53-47 in the semis and Hordville's experience was too much for Henderson, 69-51 in a good old neighborhood squabble. Henderson and Hordville are seperated by a mere 25 miles, you see.

Have to tell you something about this final. Not many fans thought that Hordville could beat Filley's match up zone defense. Well, ironically Hordville employed the same defense and after watching Filley in the semifinals, Bulldog head coach Glenn Bouc came back and told his Hordville players something to the effect "I watched Filley's match up zone gentlemen, and we will be winners in the championship game."

Bouc must have known what he was talking about because Hordville rallied from 5 points down with 2:12 remaining in the game to beat Filley and halt their incredible 78 game winning streak, 41-40. Reserve Kevin Guilford hit his ONLY shot of the entire tournament from the left side of the free throw line with 6 seconds left to lift the Bulldogs to the sweet victory.

*Not very many State tournament fields in Class C have had a combined 40 losses among it's entries. Other than undefeated Grant, next best was Bassett with it's 16-3 record and they had to recover from back-to-back season ending losses to Rushville and Ewing to get in.

This first round was tough to predict except for Grant, and the Plainsmen beat Genoa 78-64 as expected to advance to the semifinals. Pierce's tough district helped them to get past Geneva, 48-45 in their 1st rounder. A pretty salty Gibbon team beat Madison 67-62, and Valley pulled a mild 61-60 upset win over Bassett to close out Round 1.

Talk about upsets. That 14-7 Valley team really pulled a stunner when they sent Gibbon packing, 61-55 to gain the finals. Grant, meanwhile, was licking their chops after pounding Pierce, 77-52.

The finals went as expected with Bill and Tom Jackman and buddy Roger Lawson spanking cinderella Valley, 56-40. Sweet year for Valley, who hadn't been to the Big Dance since 1948...........and sadly hasn't been there since. To Valley's credit, they actually forced Grant to come from behind in this title game.

Class C's All-Tournament team was 60% Grant with both Jackmans and Lawson. Brent Stacy of Pierce was also named along with Valley's outstanding post man, Pete Bourland. Grant's Roger Lawson won the Class C tournament scoring title with his 67 points. Bill Jackman followed with 57, and pulled down 30 boards to tie with Bourland for that honor.

*Class B was the Year of the West in 1981, although most thought Crete and Aurora would be headed for a rematch for all the marbles in the finals. In the first round, those Huskies lost to Holdrege for the 2nd time in 1981, dropping a 53-41 decision to the Dusters. Columbus Scotus looked very impressive in a 76-60 win over a battle tested Omaha Ryan squad. On the other side of the bracket, Sidney's Tom Christians was too tough for Albion, as the Red Raiders took a 57-49 win, and Crete sent a youthful Lincoln Pius X team into track season with a 67-59 victory.

Sidney and Crete staged a marvelous semifinal show before the Raiders put away the Cardinals, 58-57, and underdog Holdrege fought their way into the finals to set up an all "west of Highway 281 final" by beating Scotus, 58-51.

Sidney's Red Raiders won their first state title since 1945 when they defeated Holdrege 55-50 to win Class B. That Class B All-Tournament team included Tom Christians and Mark Blomenkamp of Sidney, the Dusters Jim Betcher, Bret Kumpf of Columbus Scotus, and Jim Dittmer of Crete.

*In the star-studded Class A State Tournament, Omaha Northwest and Lincoln East were the choices by most sports scribes to reach the title game. A funny thing happened on the way to the finals though.

Ron Kellogg and his Omaha NW pals won a hard fought 76-71 win over a quick Omaha Tech bunch in the 1st round. Omaha Benson and Lincoln High put on a spectacular show in a contest the Bunnies finally won 64-62 in TWO overtimes. That game featured Benson's front line of 6-10 Dave Hoppen and 6-8 Curtis Kelly against Links 6-6 John Matzke and 6-4 twins, Steve and Paul Johnson. A games for the ages, which of course, I missed.

On the other side, Creighton Prep beat an overmatched Kearney team, 56-36 and Lincoln East had their hands full before turning back 9-9 Fremont, 68-63.

In the semis, Prep's height was too much for the Spartans, as the Junior Jays came away with a 68-65 win. Benson's Bunnies denied Northwest's Ron Kellogg a shot at the finals by turning back the Huskies, 60-57.

In that Class A final, Creighton Prep's Jeff Koenigsman stole a pass, fed the ball to Kerry Trotter, who was fouled, then proceeded to nail 2 free throws to edge Benson 54-53, spoiling retiring Benson coach Don Knauss' dream of going out a winner. The Class A all-tournament team had Trotter and Vic Lazzaretti of Creighton Prep, Kellogg of Omaha NW, Dave Hoppen of Benson and Lincoln High's 6-6 senior, John Matzke. All the rest were JUNIORS.

*It's no small wonder Hordville was able to upset Filley to win the Class B title with players like Gary Shoup and Russ Wilshusen. I saw both players and Shoup just left me in a tizzy. What a player, and just a junior. 1000 yard rusher Todd Tyler was a dandy for the Bulldogs too. Henderson, with 2 Freshman starters, was about to build an era that would never again be matched in that school's history.

A name missing from either one of these all-state teams that I certainly would have included was Maxwell's really, really talented, 5-7 guard, Greg Baxter. The senior averaged nearly 17 ppg and was a team leader and floor general alike.

*Grant was something else with rthe Jackman boys and Roger Lawson, son of head coach Tom Lawson. So talented was junior Bill Jackman, that nobody even blinked an eyelash when he was named to the 1st team Super-State squad. Even with the talent in Class A, Jackman was a no brainer selection.

Another splendid player, and a vastly talented all-around athlete was Tri-County's Jay Bergmeier. And maybe Hayes should have been 1st Team, huh? How about some of these honorable mention names; Kelly Stauffer of Rushville....went on to play quarterback for the Seattle Seahawks (1988-1992) and is currently a color anaylist for ESPN/ABC for college football games. Kurt Hinrichs and Greg Hardin are now outstanding high school basketball officials for the NSAA. Ryan Rathke is GINW head boys hoops coach. Is Madison's Mike Weiss now the current hea coach at Wahoo Neumann? I'm thinking that's the same man. the late Brian Heimer was an outstanding football player for the Huskers. Terry Bleach was a successful girls basketball coach at Bellevue East. Wahoo's Greg Reeves walked on Nebraska and ended up lettering 3 years and started at DB his senior season.

Robb Schnitzler, along with his talented siblings, father and mother, are members of the Nebraska High School Sports Hall of Fame. So much talent on this HM crew!

*No doubt about Christians' talent. How about 2nd team player Jay Novacek? All he did was go on to be a 5 time NFL Pro Bowl tight end for the Dallas Cowboys. Novacek was the only player ever to have his jersey retired at Gothenburg. Kucera was an easy pick when Scotus started their Hall of Fame in 1999.

One name missing from either all-state team that shocked me was Mt Michael's Joe Mayberger. Pretty nice player.

*How good is the first team when Lazzaretti and Martz can't make it? A performer that was probably overshadowed because of the incredible talent, or underrated at any rate, was Lincoln High's John Matzke. I saw the 2 overtime dandy at State when the Links locked up with Benson. Still dream about that baby. Impressive 2nd team with 4 of 5 players averaging a double/double.

*Just want to reiterate that this junior class is regarded by many people as the best basketball class EVER to come through the years in Nebraska. What do you think?