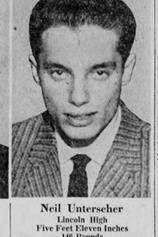 While I'm awaiting the information on All-State basketball team from 1977 through 1990, let's rewind the years 1957, 1958, and 1959 before picking up where we left off. Thus far we've covered the years spanning 1960 through 1976. Now the spotlight will shine on the 1958 season and how things played out when Nebraska high school basketball featured 6 classes, Class AA through Class E.

This was one of the years only FOUR teams made it to the State Tournament in each class. This format began in 1955. It continued in 1958 with the 6 class format.

Here is how things panned out in 1958 at the Big Carnival in Lincoln.

*In Class E, the smallest class of the six in Nebraska, defending champion Byron was the overwhelming favorite with 6-5 Ivan Grupe returning. Grupe was not the only thing that made this team click. Harold Dittmer was as good as it gets and made the Class E all-tournament team in 1957 for the defending champs.

In the 1st round, Byron (19-4) pummeled Elba 80-34. Elba made it to Lincoln without a senior on the squad, though. Raymond bested Wilsonville, 54-48, but that Wilsonville team boasted one of the finest sophomores in the state in Bill Holliday.

In the championship game Raymond had a good news/bad news scenario. While the Panthers were blanketing Byron's all-state Grupe, holding him to 14 points, they apparently forgot about Byron's watch-charm guard, Harold Dittmer. The standout senior put on a one man show for Byron, scoring 25 points to lead his team to the 52-31 title game victory. Raymond unveiled a shining star in that game as freshman Chuck Hellerich netted 15 of his team's 31 in the loss.

Both Grupe and Dittmer made the Class E all-tournament team, along with freshman Hellerich. Wilsonville sophomore Bill Holliday was also named to that squad along with Elba junior, Tom Nowak.

In the opening semi final round, Herman matched Clatonia's height, but saw it's "bigs", Jerry Evans and Larry West foul out late in the game, giving Clatonia's Rodney Sagehorn and Ron Miller easy paths to the bucket. Sagehorn netted 21 for the winners, but game honors went to Herman's lightweight 6-0, 140 all-state senior, Dave Kroger, who burned the nets for 31 big ones.

Red Willow's run, run, run and gun offense outgunned Ulysses 79-73 in the other semi final. Red Willow's spectacular and sharpshooting Burdette Malleck tore up the twine with 28 points to pace RW. Malleck's running mate, Marvin Teel registered 21 to assist Red Willow in the "W". The most eye popping scoring in the game easily came from lightly guarded little Ulysses FRESHMAN, Mark Cordes. In the skin tight first half, the ice-water veined 9th grade whiz would pull up near half court and drain his two-handed long, long set shots, dazzling the crowd. But Red Willow started guarding Cordes after he drained his 20th point and cooled off the sizzling half court shooting show.

In that title contest, Clatonia's tall rebounding/scoring tandem of Ron Miller and Rodney Sagehorn derailed Red Willow's fast break with a 63-47 win. Sagehorn, 6-2, and the 6-5 Miller monopolized the rebounds and kept Red Willow from getting the ball to ignite their fast break express. The two Clatonia stars combined for 38 points in the game, Sagehorn dropping 22 and Miller 16.

It was the 27th win without a loss for coach Bob Ihrig's Clatonia team, while Red Willow suffered their 1st loss in 28 games.

*Class C, defending champion Alma returned to Lincoln looking to extend a 34 game winning streak. The 23-0 Cardinals drew 15-6 Pawnee City in the 1st round. The other first round match pitted a 19-4 Wausa team against Hastings St. Cecilia team (23-2) that boasted one of the best players in the state in Jerry Sherman (25 ppg).

Pawnee City absolutely sent shock waves through Lincoln when they sent defending "C" champion home packing in the semis with a 58-54 upset victory. The Indians led all the way in the game, advancing to a 32-12 lead at one point in the 2nd stanza. Alma would never recover and watched it's 34 game winning streak evaporate in the process. In the other semi, Wausa controlled St. Cecilia's fabulous 6-5 post Sherman in the 1st half and jumped out to a 17-10 opening quarter lead and 27-24 at the intermission. But the 'Hawk's coaching staff moved Sherman from his post to the outside and the 6-5 dandy started nailing one-handed shots and driving layups to pace St. Cecilia. Sherman's rugged rebounding also made a difference as the Hastings catholic school came back to post a 57-43 win, dominating the 2nd half, 33-16.

In the "C" Championship afternoon contest, St. Cecilia simply outclassed Pawnee City with a resounding 62-39 pounding. In fact, the Bluehawks Jerry Sherman and Bill Meisenbach 18 points apiece nearly outscored the Indians in the game. Pawnees City's fine all-state Harold Howard was held in check, accumulating only 7 points, but Pawnee City did have a fine performance from Colwell, who hit for 17 points.

Sherman made the overall All-Tournament team, while he, teammates Bill Meisenbach, and James Chaulk made up two thirds of the "C" all-tournament squad. Pawnee City's Colwell was also on the "C" team.

*The Class B field saw Minden (14-4) playing a 12-6 Auburn and an 18-2 Wayne team that featured sophomore sensation, Roger Denesia facing a one loss Fullerton team that many picked to win it all in "B". In that opening round, Minden overcame a 38-31 3rd quarter deficit to edge upset minded Auburn, 51-50. Well balanced Fullerton sailed by Wayne, 56-48 and led most of the way. The Warriors were led by Sam Sample's 15 points, Gary Randles added another 13, and John Travers scored 12.

In that final, the Whippets all-state Gil Quadhamer drove in for a 2nd quarter layup to give Minden an 18-16 lead. They would never relinquish the lead enroute to a 54-42 win over a very good Fullerton basketball team. It was Bruce Christensen that paced the Whippets in scoring in both state tournament games. Christensen netted 19 in the 51-50 squeaker against Auburn in the semis, then dumped in 17 against Fullerton. Minden also had a nice playmaker in sophomore Sam Somerhalder and a very dependable 6th man in Joel Meier.

Both Quadhamer and Christensen made the "B" all-tournament team, while Sam Sample, Fullerton 185 pound junior, also was named. The head scratcher was the Warriors John Travers not making the team.

*In Class A Omaha Holy Name was back to defend their 1957 title. The Ramblers still had a great player in Bob Eickholt to lead the way against Holdrege (15-4) in the 1st round. The other opener in Class A, 14-4 Falls City opened the '58 carnival facing a fine 21-1 Ogallala squad.

Holy Name crushed Holdrege 62-49 with it's thundering fast break in the first semi final game and Ogallala solved a tight Falls City defense at the free throw line to advance to to the final game against Holy Name.

In the Class A championship game, a stunned Omaha Holy Name cheering section watched Ogallala sprint out to an 17-5 lead, threatening to run away with the upset win. The Indians built that lead the first 4:30 of the 1st quarter. But the defending champion Ramblers outscored the invaders from the West 28-5 from that point on to the halftime break and were never headed following the opening blitz by Ogallala.

Holy Name's splendid Bob Eickholt led the Ramblers with 21 points and was named to the Big All-Tournament squad along with classy teammate, John Mackey. Ogallala landed it's 5-11, 155 leader, Harry Boss on the dream team.

The semis opened with a bang as Omaha Central ended Boys Town's two year reign in Class AA with a rousing come from behind 63-60 win over the Cowboys. The score was tied 12 times in the contest and the lead changed 17 times in that Central/Boys Town game. Ken Russell and Gene Owen each sank a pair of free throws in the final minute to lift the Eagles. In the other game, Lincoln High turned back a scrappy North Platte team, 49-43 to set up the title game matching the Omaha/Lincoln rivals.

In the "AA" championship game, Lincoln High won it's 13th state title in school history with a 45-38 win over Central. Since their title in 1946, the Links had 5 unsuccessful attempts before 1958 at winning a state title. A virtually unknown sophomore with an unforgettable name, Sam Zollicoffer, sparked Lincoln High to the win. Entering the game with the 3rd quarter only a minute old, Zollicoffer immediately drained 2 free throws to break a 30 all tie.

Zollicoffer later frustrated the Eagles with 2 steals, while Links ace Neil Unterscher cashed in on the points. Neither team shot well in the game. Lincoln High connected on only 39% of it's field goal attempts (14-36), but hit 17 of 28 from the stripe. The Links defense frustrated the Eagles into 12 of 34 field goal shooting (34%) that eventually spelled doom for Omaha Central.

*Herman ace Dave Kroger ended his career with 1,716 points, 70th on the all-time career list. 1958 certainly had some prolific scorers.

*Of course Kiffen played football for the Huskers, had a brief stint in the Canadian Football League, then came back to be the defensive coach at Nebraska. He later was the head coach at North Carolina State (1980-82), then held coahing jobs in the NFL with the Green Bay Packers, Buffalo Bills, Minnesota Vikings, New York Jets, Minnesota Vikings, New Orleans Saints, Tampa bay Buccaneers, and was recently assistant head coach/defensive coordinator for the Dallas Cowboys in 2014. Holdrege standout Jim Huge went on to letter for Nebraska football in 1960-61-62 as an offensive end. Huge was Academic All-Big Eight all three years at Nebraska and Academic All-American in 1962.

Holy Name's Eickholt would go on to big things after his illustrious high school days, but we'll save that for the 1959 all-state teams. He was only a junior in 1958.