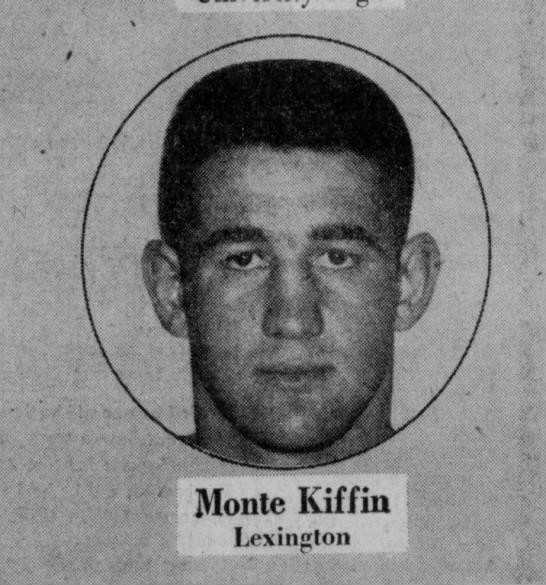 While I'm awaiting the information on All-State basketball team from 1977 through 1990, let's rewind the years 1957, '58, and 1959 before picking up where we left off. Thus far we've covered the years spanning 1960 through 1976. Now the spotlight will shine on the 1957 season and how things played out when Nebraska high school basketball featured 6 classes, Class AA through Class E.

This was one of the years only FOUR teams made it to the State Tournament in each class. This format began in 1955. That's brutal.

*In Class E, tiny Phillips entered the state tournament with a sparkling 28-1 record and advanced to the finals to meet Byron and high scoring Ivan Grupe. Grupe ripped the nets for 29 in the semis against an outclassed Cody, then scored another 27 to overcome an early Phillips lead. Byron would win on that day 51-38 and Byron was licking their chops because Big Ivan was only a junior for the Thayer County squad.

*Class C was a wide open affair and southwest Nebraska's Alma was the team to come away with a State Championship in the end. Outstanding rebounding and sizzling shooting led the Cardinals to an impressive 56-46 decision over a fine Waverly squad. Alma ended 1957 with a 24-1 record with the only loss coming to Hastings St. Cecilia, 67-51.

It was a battle royale between 2 All-Staters, as Alma's 6-3 Larry Andres locked horns with the Viking's high scoring Len Quathamer. Andres not only scored 24 points to take game honors for Alma, but personally stuffed Quathamer to a total of 2 field goals and 7 of 9 from the stripe for only 11 points.

*Class B was even more wide open than Class C, but it was tradition rich Geneva who prevailed in the end. It wasn't easy, but Coach Archie Chapman's Wildcats won their second title in a row with a gut-wrenching 51-50 win over tough University High from Lincoln. The Tutors took Chapman's crew into overtime, but Geneva's Dick Anderson drilled a jumper with 40 seconds remaining to take the 51-50 lead. University High's all-everything Marv Bauer, who was famous two handed jump shot, stormed down the Coliseum floor and launched a shot that landed just short and the 'Cats had themselves a 2nd straight title. This time they added a Class B crown to the "C" title they garnered in 1956.

In that championship game, University High's Bauer stunned the crowd FIVE times with his sparkling 30-35 foot 2 handed bombs, good for a team leading 21 points. But it was Geneva's 6-3, 195 pound junior, Larry Fiedler that snached game high scoring honors with his sweet 29 big ones. Both players made the all-state AND Overall All-Tournament squads. They were that talented.

*In Class A the favorite was Lexington, led by a big junior by the name of Monte Kiffen. But in the finals, on St. Patrick's night, it was a group of 4 Irishman from Omaha Holy Name that would hold off the rugged Kiiffen and his Minuteman team to grab the "A" title, 51-46. Monte Kiffen hit a jumper with 46 seconds to close the gap to 49-46, but The Ramblers held on. Pat Toohey and Jim Markey led Holy Name with 14 points in the title win. Kiffen led all scorers with over half his team's points, scoring 24.

*The Class AA final came down to a showdown between Grand Island and Boys Town. The Islanders were a longshot to make it to Lincoln in 1957, but GI surprised Lincoln High, Northeast, and Hastings to reach the finals. The Cowboys never seemed to break a sweat in dispatching the Islanders, 53-43 in the AA championship game before 9,500 at the NU Colesium. Grand Island's players just could not handle the Boys Town press that evening. Journal-Star writer Ron Gibon even stated the Skip Palrang's Cowboys looked sloppy and still won by 10. Boys Town's all-state sensation, Milton Juan carried them through 3 quarters, then it was the Jim Gordon show the remainder of the way. Gordon would end up with 23, Juan with 19.

For Islanders, it was husky 6 foot senior Dick Knuth leading the way with 12 points. Bob Krall, whom I saw at this afternoon's Class B boys district games at GISH, scored 6 in the game. The Islanders were coached by E. C. Alfrey.