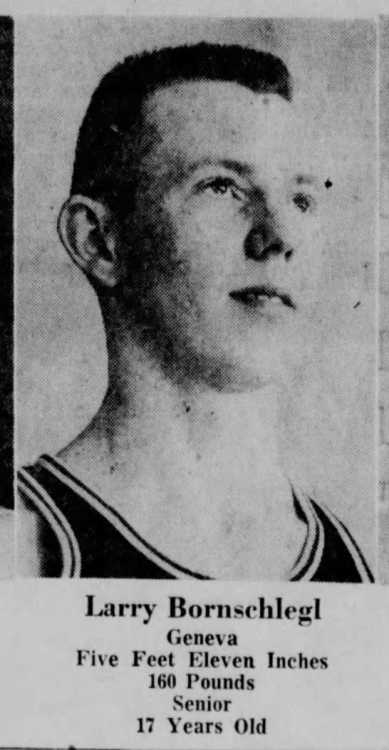 *In Class D, a deliberate, balanced scoring Polk Cubs team pulled away in the 2nd quarter and proceeded to defeat unbeaten Indianola 61-42 for the "D" crown. There was some sweet talent on that Polk team, especially with all-around sensation Darwin Hahn. I see the humble Hahn at least once a month here in GI and he still would rather talk about Husker football than his high school athletic feats.....and there were many. So balanced was the scoring against Indianola, the smooth stroking Darwin Hahn was just the 3rd leading scorer that day with 10 points. Gayolrd Dose led the Cubs with 15 points (11 from the charity stripe), followed by Regy Green with 13. Hahn and Green, both juniors, made the all-tournament "D" squad as did Indianola's senior leader, Henry Krous.

Class D had a slew of talented juniors playing in that 1961 season, including Odell's Vern Penner, who turned some heads during the State Tournament.

And I'm thinking Polk may have set some sort of record with their band that year. Band Director Norman McIntosh had a pretty nice sized band for Class D......36 pieces. The strange thing.......34 of them were GIRLS. Boy, would I loved to have been one of the 2 boys in that outfit that year. I kinda like the odds of finding a girl friend in that setting.

*In the Class C final, it was a gigantic man named Carl Voyles that led his Weeping Water Indians to a 61-53 win over a very quick, slick ball handling, shartpshooting Fullerton team. The 6-8, 270 pound Voyles was something else to watch. He was slow, could not jump much at all, didn't make it all the way dwon the court on some offensive possessions, but could shoot the rock and play defense. As the state tournament title ended, Voyles was still growing. The poor guy had outgrown his bed at home and slept on the floor every night. Weeping Water also had 6-4, Jim Moore while the Warriors from Nance County had no player 6 feet tall.

Fullerton never quit in this title game with the legendary Ray Ehlers coaching. The Warriors pulled to within 53-52 with 4:56 left in the game, but went scoreless the next four minutes to seal their doom. Four fifths of the Class C all-tournament was made up of players from these two finals teams. Both Voyles, who led all tournament scorers with 63 points, and Jim Moore were named to the squad. Fullerton landed Gene Cunninghan and Don Uzendowski on the tournament Class C Dream Team. Those Fullerton Warriors had some very good basketball teams back in these days.

*Class B, Chadron brought Western Nebraska it's first state championship since 1955 when Chadron held off a determined Burwell team, 56-53. The Cardinals could score some points for sure. Chadron dropped in 194 points in three state tourney games, setting a record in the process. The invaders from the West won the title with balanced scoring, just like Polk in Class D. In that win over Burwell, the Cardinals were led by Larry Miller's 21 points, followed by Bill Rice with his 18 counters. Randy Riggens added 12 to lead Chadron, and also shut down Burwell's 6-5 inside man, Dick Otto, who scored only 3 points. Rice set a tournament record earlier in the tournament by canning 11 free throws.

Rice and Riggens both made the Class B all-tournament squad, as did Burwell junior Dick Hahn. The name you didn't hear much was Chadron's Larry Matthesen. Matthesen was held to 4 points in that final game, but led the Cardinals all season with his 16 ppg average. Matter of fact, Larry Matthesen started every single game of his high school career...freshman through senior campaigns. The splendid Larry Matthesen averaged 13 ppg for his career and scored 1,256 points. Back then, that was a ton of points, friends.

By the way, the Wizard of Ruby Street, Freddy Northup was the Burwell head man in those days. Ticket prices that year.....$1.50 for Adults and 75 cents for students.

*Class A's title game turned into a laugher when Al Bahe's Fremont Tigers clawed Creighton Prep by a 60-38 count. The margin of victory was the biggest in State Tournament history at the time. And the amazing thing was the Fremont team was junior-laden that year. On the other hand, the Junior Jays were an upstart bunch that entered the Big Show with a losing record of 8-10. It was a strange tournament in Class A in 1961. 3 of the 4 top seeded teams lost first round games, with the Fremont Tigers the only one to survive. Fremont never waivered during the tournament and in the title game the Tigers two fine guards, Jim Ebers and Dick Mendenhall were simply too much for Prep. Both made the all-tournament as juniors. Five players did all the scoring in that championship game for Fremont and 4 were in double figures with a 5th just missing with his 9 point output. Ed Rainey, Mendenhall, Don Munday and Jim Brown all scored 13, while Ebers added 9 in the contest.

*Not often you see 3 juniors named to any all-state team. Penner turned heads in the state tournament by scoring 53 points in just 2 games. The 6-3 junior averaged 20 a game for Odell. Polk's Hahn was a steady rebounder and could nail 'em from inside the paint or outside as well. The highest scorer on this Dream team was Indianola's Krous. Henry topped the 500 point mark for the season. Murdock's Rikli dropped in 20 a game and nearly led his team to a win over Polk at State with his 27 point outburst.

The long distance sharpshooter of the squad was definately Fairfield's Marion Fike. The 5-7 guard could bury them from up to 30 feet away for the once beaten Fairfield team and was considered by many as the finest outside shooter in the entire state.

*Class C certainly had a couple of prolific big men in Weeping Water's Voyles and St. Marys Coleman. Voyles averaged right at 20 points a game, and with 6-4 teammate Jim Moore, made the Indians nearly impossible to stop. At 270 pounds, Voyles was strong as an ox and just a load to move. Not overly athletic, the big dude had a sweet shooting touch. David City St. Marys 6-8 post Gene Coleman netted around 20 a contest too despite his team playing only a 13 game regular season schedule and failing to make it to State. Arlington derailed St. Marys in districts in overtime. The David City parochial school had great wins over 3 Class B teams, a Class A school and some good Class C schools though and really had a successful 1961 campaign.

Millard's Warren Wheeler was absolutely one of the best players in the state, scoring 596 points for an average of 24 ppg. They were denied a state tournament berth by Weeping Water in the regional playoff.

Central Nebraska boasted two all-state players in Fullerton's Uzendowski and Loup City's Frank Sokol. Fullerton's Warriors played up in competiton all year, besting 8 Class B squads, including 2 wins over Loup City. The "B" competition payed off as the Warriors made it all the way to the Class C finals. Don Uzendowski just simply had great basketball smarts. Loup City suffered a mid-season slump, losing 3 of 6 games in a span of a week, but the 6-3 Sokol was rock steady throughout the entire season as the Red Raiders finished 15-6. And Sokol could shoot with pretty deadly accuracy from anywhere on the court.

By the way, Fullerton's Billy Whitney had to be one of the slickest ball handlers in Class C and beyond and if the truth be known, did not enjoy the game that much. What a dribbling wizard.

*This group was a picture of excellence on the hardwood, especially Geneva's Bornschlegl. The slick, flashy floor general was regarded by many as the state's best all-around player in what was considered a 'down" year in Nebraska high school hoops. The 5-11, 160 pound Bornschlegl could do it all, can the long bomb, or drive past defenders with ease. When I saw Larry play, I thought he could do anything he wanted and the Geneva whiz rarely made a mistake, with a basketball IQ off the charts. Bornschlegl's wide spread respect was reflected by his selection to the All-Class, All-State team.

Bill Witty of Syracuse scored 519 points during the season, averaging a fat 26 ppg for the Rockets. Witty's deadly zone was 15 feet away from the basket, where he was an unstoppable force. And despite being only 6-2, Witty rebounded with the best. The quarterback/floor general for state champion Chadron was clearly the 5-7 Matthesen. The Cardinal sparkplug scored 390 points his senior season.

Hebron's Dennis Dondlinger, a retired Grand Island Public Schools teacher, was a huge inside force for the Bears, pouring in 21 ppg. Dennis went on to enjoy a terrific college career and played city league well into his 50's and dominated. York's rugged Roger Brouillette was probably, without a doubt, one of the most fearsome rebounders in the state. When Brouillette wanted to clean the glass, it was highly suggested a defender not get in his way.

*Northeast's Wright was another magician with the basketball in his hands. Averaging 20 ppg, it was not wise to foul the 5-11 Rocket senior considering he made over 80% of his charity tosses. Benson's Ken Connor was not a prolific scorer for the Bunnies, but had an uncanny knack of coming through when Benson needed the points the most.

Speaking about coming through big time in key games, there may have been none better than Kearney's Bill Behn. The 6-5 Bearcat dandy turned some heads when he scored 33 points and grabbed 32 rebounds in the Big 10 Championship game. 33 and 32.....are you kidding me! Behn scored 325 points in 19 games for Kearney.

Despite Class A state champion Fremont's balaned scoring, Jim Brown was the steadiest contributer of all the Tiger starters. Fremont depended on the rugged, 6-3 Brown to scrap for rebounds and he came through with shining colors time after time. Alliance standout Jim Kettlehut led the Big 10 conference in scoring with 312 points and was invaluable to his team to say the least and they did not even crack the Class A final ratings.