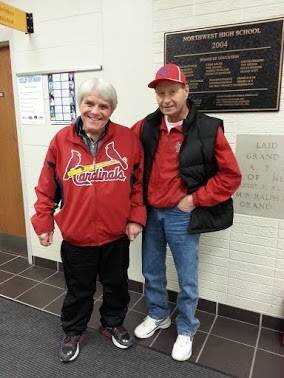 Everyone has experienced one. It appears out of the blue when you least expect it. You arrive to perform an everyday task, something you've done dozens of times before. Then, out of a clear blue sky, the ordinary day turns into an experience you will never forget.

I do all the P.A. work at Northwest high school basketball games. Last night, just an ordinary Tuesday evening, Crete was in town to take on the Viking boys. Usually, the visiting team has an individual keeping the stat book. On this night, it happened to be a very outgoing, nice girl whom I thought might just be a coaches wife. I knew it was going to be a great night when she immediately gave me the roster with neatly hand written name pronunciations included. Ya got it made, man. This girl probably even gives you a player's number the minute a shot leaves his hands.

Ditto. I knew I had it made on a Tuesday night for sure.

As the night went on she told me her father was in the crowd and that he was a pretty well known high school athlete in his day. I asked his name..........it was Larry Vlasin. One of my high school heroes from back in the mid 60's.

It was a little tougher after that to concentrate the remainder of the game. Nights like these just don't come along that often. Being a high school sports historian, I knew the name well.

Larry Vlasin - Madrid, one of the most splendid all around athletes of his time......my time, perhaps all time. Before I go any further, I will tell you of his accomplishments.....after all, this is about a legend.

Larry Vlasin (pronounced Vla-SHEEN) was called a legend by many opposing coaches after his 1964 junior and 1965 senior seasons at the Southwest Nebraska school of Madrid, around 25 miles SE of Ogallala. The school was later named Madrid Wheatland, and now the kids from there attend Perkins County high school in neighboring Grant, a short 3 mile stones throw away.

Vlasin, a slick, nimble footed quarterback on Coach Bob Briggs Pirate football squad, tormented opponents out of a pass/run offense, often times no-huddle offense rarely seen in that day. So successful was that offense, Madrid never lost a football game during Vlasin's junior and senior seasons. He was all-state football both years and was the top vote getter from opposing coaches in both '64 and '65.

In 1964, Larry Vlasin set a National 8-Man football record for Total Offense per game with a mind boggling 338.9 yards an outing. The record stood the test of time for 45 years. To this day, the magic quarterback from Madrid is still ranked 3rd all-time in that department.

As a junior, he scored 178 points rushing, passed for 130 more, and picked off 11 passes on defense. On the hardwoods, Vlasin was an unselfish player, yet averaged 26.9 ppg as a senior with 12 assists per game. As a sophomore, Larry once scored 42 points in a game, breaking the school record of 41 held by his brother Ron. During his senior season, the long distance sharpshooter went off for 55 big ones against a much larger Grant team. In the 73-70 upset, Vlasin poured in 18 points in the 2nd quarter, then came out after halftime and scored All of his teams 21 third quarter points en route to the memorable 55 point outburst.

Larry Vlasin would go on to score 1,895 points in his career at Madrid and was a 2 year all-stater in basketball to go with his 2 all-state football seasons. Vlasin was chosen to play in the Shrine Bowl football game in 1965.

In track, Larry was a one man wrecking crew and scoring machine. In the South Platte Valley Conference meet his senior year, Vlasin won both hurdles, the broad (long) jump and pole vault. He added seconds in the high jump and shotput and a 4th in the discus. At the State Track Meet that season, Larry qualified in four events and finished 4th in the pole vault after setting the "D" district record with a 12-2 and a quarter vault.

In 1965 the Lincoln Journal and Star chose Larry Vlasin as their High School Athlete of the Year, the first time a small school Class D lad had earned the award.

Despite all that success, Vlasin's favorite sport was BASEBALL. After his senior season, Vlasin faced an enviable dilemma. Nebraska basketball coach Joe Cipriano offered him a half basketball scholarship, while baseball coach Randy Sharpe offered a half baseball schollie. But, you see there was another dilemma.

The summer between his junior and senior seasons, Larry and his brother Ron, who was a junior at Colorado State University, formed a double play duo for the small town team of Brandon, Nebr. This team was a collection of talent from western Nebraska and eastern Colorado. The team went to a non-pro baseball tournament in Wichita. During that summer, Brandon won the state championship in its class, led by Vlasin's .300 average. In that Wichita tournament, dotted with teams that featured former Major and Minor League players, Larry stroked 4 hits in 4 games.

His play prompted queries from FIVE major league teams whose scouts were in attendance. The 5-10, 175 pound "high school legend" from Madrid decided to pass up the college offers and signed with the Kansas City Athletics in the summer of 1965. The signing bonus Larry received from the Athletics would later pay for his college education. Vlasin played with Kansas City and moved with the team when they relocated to Oakland and became the A's.

Larry Vlasin rose to the Double A level and had a Triple A contract in his hand when he decided to head off to college as the Vietnam war was approaching. To my knowledge, they didn't normally draft young guys that were in college. Larry came back to Nebraska, attended Chadron State, and went on to get his degree.

And the sad thing about this deal was that Larry couldn't compete in college sports because he had already signed a professional baseball contract. The multi-talented Vlasin went on to coach football, basketball and track at Culbertson, Cozad, then Gordon. He finished out his career as head basketball coach at Class B, McCook high school.

As a junior in high school, I recall my friends and I talking about Larry Vlasin on the way to our football games at Cozad and Gothenburg. We thought how cool it would be to hop in my station wagon and go to Madrid to watch the small town "phenom/legend". Alas, we always had a game when Madrid had one, so the dream never materialized. During that time I remember coaches telling my football coach, Bob Ley, that there were 2 small town athletes in the western part of the state that could play for any Class A school in Nebraska....Larry Vlasin in football and Amherst's track star, John Eckhout.

I thought about Larry Vlasin for years after high school. The star I never had the opportunity to see perform his magical feats. Meeting him would have been a satisfying second.

51 years after the fact, on an unsuspecting Tuesday night at a Northwest high school basketball game, my dream came true. Thanks to an accomodating daughter, a legend appeared out of nowhere. Far from the gridirons, hardwood courts and cinder tracks of the South Platte Valley, appeared a "grandpa" to watch his Crete freshman grandson play in a mid-week basketball game.

Larry Vlasin is a quiet, humble man who never like to brag about his accomplishments. I was taken aback by his humility but was on a cloud after spending a few minutes after the Crete/GINW game. It was difficult sleep last night. People like Mr. Vlasin just don not cross your path that often. I'll never forget the Tuesday night in February.