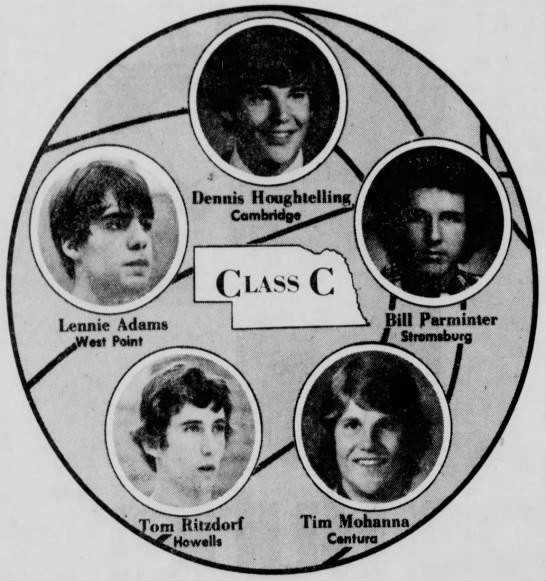 Before we look at those aforementioned all-state teams, here is how each class played out in 1974 State Basketball Tournament:

* In Class D, Palmer waltzed their way through the tournament field to win a State Title and avenge a bitter 71-43 loss in the state title game 2 years ago to Adams and Kim Veerhusen. The Tigers roared past Gurley 81-60 in the opening round, easily bested Ewing 68-50 in the semis, then turned back Falls City Sacred Heart, 68-47 in the title match-up. The fabled Irish fast break was completely defused by the sagging defensive efforts of Palmer, especially 6-6 senior Russell Thede and 6-1 Rick Peters ( current AD at St. Paul). The Irish actually pulled within 54-49 a minute and 8 seconds into the final quarter, but lost their tallest player, Steve Kottich, who was assigned to guard the tall inside presence of high scoring Russ Thede. Moments later Sacred Heart leading Tim Hoy exited with his 5th foul and the comeback was snuffed out.

Russell Thede led the way for the Tigers that day with 18 points and 16 boards. Palmer finished the season at 22-1. Both Rick Peters and FCSH's Hoy made the Class D all-tournament squad.

* The Class C title went to Howells, who made it back-to-back Class C titles by overcoming bad 4th quarter free throw shooting and a 3rd quarter scoring drought to defeat Arapahoe 52-47. The Bobcats took a different path than Palmer did to take the "D" championship. All 3 games were close, but Coach Jim Morrison's forces seemed to find a way to win in crunch time. The 'Cats were paced by 6-5 ace Tom Ritzdorf, who knocked down 14 points but more importantlt snagged 16 rebounds. Arapahoe had a splendid player in Tom Weber, who ended up with over half of the Warriors points, scoring 24 counters in that "C" championship game.

Every time Arapahoe pulled close it was Ritzdorf who would catch fire, although the Bobcats received balanced scoring with Rick Cech added 12 and Dave Prusha's 10 counters. Both Ritzdorf and Prusha were named to the "C" all-tournament team, along with Arapahoe's Doug Monter, an outstanding 6-1 sophomore that season

* In Class B, Lincoln Pius X rode a last second tip-in from senior Artie Akasmit to edge a very good Lexington team led by shining stars Pat Hodges and Ted Harvey. It was a fitting ending for Akasmit, who suffered through a painfully frustrating senior year in athletics for the Thunderbolts. The 6-3 Akasmit, an ALL-STATE running back for Pius X as a junior, suffered a knee cartilage tear in the 'Bolts 1st football game of the season. He required surgery and a long rehab period just to be able to hobble through the 1st half of the hoops season.

Akasmit recovered enough to play the final regular season game without a brace. And he regained enough speed and jumping ability to regain his Center position in the balanced Pius attack. Artie Akasmit actually scored 10 points in the title game against Lexington, but no points were larger than the buzzer tip-in game winner. Fitting ending indeed.

The Thunderbolts assigned John Magesman to the nearly impossible task of guarding Lexington's star Hodges, and "held" him to 19 points while knocking down 12 himself. Pius X, who finished at 21-5, won it's first championship in 50 years in 1974. The last one before that one had come in 1924 when the school was known as Lincoln Cathedral. No surprise that both Harvey and Hodges were named to the "B" all-tournament team, as was the 'Bolts Jim Hamersky, who averaged 18 ppg in the '74 State Tournament.

*In Class A, it took a head coach straight out of the Sandhills town of Hyannis to lead Omaha Central to it's first State Championship in 62 years. Eagle head man Jim Martin and his Tremendous Trio of John C. Johnson, Charles Lewis, and Mark Ashford turned back Lincoln East, 57-49 before 8,600 folks at the NU Coliseum. Central, who played with 3 underclassman in their starting lineup, pulled away in the final stanza when Charles Lewis canned 11 of 14 charity tosses to seal the win.

Omaha Central played what they called a 1-3-1 Clamp defense against Lincoln East in the title game. Honestly beats the heck out of me what a Clamp defense would be, but it must have been efficient because it forced the Spartans outside where they suffered 23% shooting for the entire 1st half. Central's Eagles, who DID NOT substitute once in the game, was led by Lewis' 19 points. Mike Ashford added 14. East was paced by the one-man show of Mike Hedberg, who scored 26 points. The Tremendous Trio of Johnson, Lewis, and Asford all made all-tournament, along with Lincoln East's 6-8 Mike Hedberg.

A strange occurance in that Class A tournament was the fact Bellevue, a semi finalist, did not allow their school to field a pep club or a band. I don't know if it was due to the fact many of it's students were from Offutt AFB or what. Small wonder Lincoln East beat them in that semi final game. How strange would it be to play for Bellevue and have almost NOBODY cheering for you in a hug crowd at the NU Coliseum. I just cannot imagime how that would have looked like or felt.

*Big old Doug Kucera could sure drop 'em in to the tune of 30+ a game and that's not an every year occurance in this state. Hampton's Olson and Palmer's Thede were, plain and simple, as good as it gets at the Class D level. Kucera was so good that Peck of Paxton had to be moved to Forward.

*Talk about a tall 1st team Class C squad, and these guys could score. I saw everybody but Adams that year and Stromsburg's Parminter was just mind boggling to watch. Big Mo, Tim Mohanna was just nearly impossible to guard once he was deep in the paint. Mo went on to enjoy an outstanding career at Kearney State. You know about Ritzdorf, and Cambridge inside ace, Houghtelling was a load inside and his 24 ppg proved it. 240 pounds! Second team's Kerry Dick of Henderson was a slick performer too and Geneva's Schnegelberger, only a junior, was awfully effective for a "skinny" 6-6 kid.

*No less tha 4 players on this team were highly recruited college prospects. The hottest was Omaha Ryan's Vaculik, who led the Metro Conference in scoring as a sophomore. Notre Dame, USC, Oregon, Marquette, Nebraska, and Creighton were said to be hot on Vaculik's tale. Lexington's Hodges, Northeast's Novak, and Lincoln East's Curt Hedburg were sought after by Division 1 schools.