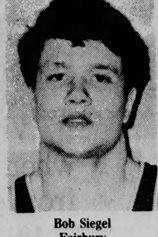 Fairbury's 3 time All-State player, Bob Siegel. The Fairbury star is one of the greatest Nebraska high school players of all time. *(photo courtesy of Journal-Star)

Now, I present to you the 1973 All-State Basketball teams according to the Lincoln Journal-Star.

There is a "good new/bad'news" situation as I searched for information in the '73 All-State teams. The really nice news is that the Journal-Star began doing 1st and 2nd team all-state teams in each class for the first time that year. It was also in 1973 that the very first Super-State teams were named in the Lincoln newspaper.

The bad news is that the days containing the Class C and D all-state teams were missing. So, I've decided to proceed with Classes A, B and Super-State basketball squads for 1973 despite those omissions. You have my promise I will make every attempt to find those squads and pick them up at a later date.

But before we look at those aforementioned all-state teams, here is how each class played out in 1973 State Basketball Tournament:

*In Class D, the Hampton proved to be the only unbeaten team in the state by defeating defense-minded Yutan 42-40 to finish 26-0. It was Mark Olsen that provided the spark to lift the #1 Hawks by pouring in 22 points and grabbing 7 rebounds. It was Hampton's first basketball title since 1945 and the '73 Championship certainly didn't come easy. Yutan had relied on it's defense all season, but on this day it was the smothering "D" by Hampton that decided the game. The Hawks limited Yutan to 28% shooting from the field, while hitting 44% themselves. So efficient was Hampton's defense, no Yutan player could reach double figures for the contest. And who guided the Hawks to their Championship in 1973? One of the best coaches in the history of Nebraska high school basketball....Jerry Eickhoff. They come no better than the Master from Hampton.

Hampton was the 2nd Crossroads Conference team in 2 years to win the Class D state championship and finish with an unblemished campaign. Benedict pulled it off in 1971. The Crossroads had to be the touchest conference, year in and year out, in those day and well beyond.

* The Class C title went to Howells, who sprinted out to a Steve Baumert led 12-2 lead and never looked in the rear view mirror. The Bobcats coasted to an easy 61-37 win over a Bertrand team that had reached the "C" finals in both 1966 and 67, only to come up short in '73. The closest Bertrand could get to Coach Jim Morrison's crew was 17-12 in the 2nd quarter, and from then on it was Katie bar the Door. The Howells trio of Baumert, 6-5 senior Larry Jacobowski, and junior Tom Ritzdorf were just too much for any opponent during the Bobcats 26-1 season. Bertrand's splendid senior Tom Ford seemed to be a one man show for Bertrand in that championship tilt, scoring 20 points and pulling down a game leading 15 rebounds. The closest individual scoring total behind Ford was 6 points, as the Vikings got off only 35 FG attempts, connecting on only 8 for the entire contest. They finished the year 21-4.

* In Class B, Fairbury snared it's 2nd title in 3 years by downing the invaders from the West, Sidney by a 60-54 count. The game was billed as a battle supreme between the Jeffs two-time all-state Bob Siegel and the Red Raiders king of Western Nebraska, Rick Seidel. The Sidney senior had an inch on the Fairbury Flash, 6-6 to 6-5, but that would be the only statistical catagory Seidel would win that afternoon.

Bob Siegel left no doubt who was "The Man" in that game, outscoring Seidel 27-12, out rebounding the Red Raider ace, 24-10, and 12 of 23 FG attempts, while Seidel struggled to hit 4 of only 15 chances form the field. Despite the wide spread in that personal battle, Sidney was never out of the game until Fairbury junior Greg Gibson connected on 6 of 6 one and one free throw situations late in the 4th quarter. Gibson pushed the Jeffs out of a 50-48 lead to a safer 54-48 cushion in the final stages.

Sidney senior Scott Cornelius kept his team in the game with his 20 points while Seidel added 15. Randy Jobman was also in double figures for the Red Raiders, scoring 13.

*In Class A, Lincoln Northeast Coach Ed Johnson may have pulled off his most masterful of 6 state championships. I'll bet Northeast fans remember each and every one of the Rockets 37 shots in that Class A title game. That's right....only 37 shots. The patient Northeast offense drove Cinderella Omaha Westside crazy as the Rockets won the 54-50 nightcap at the NU Coliseum.

It wasn't an easy win for Northeast. The Rockets 3 scoring leaders, Tom Westover, Terry Novak, and Bruce Maske were saddled with foul trouble the entire 4th quarter during the tight battle. In fact, Westover, who led all scorers with 27 points, fouled out of the game with 2:11 left. That enabled Westside to close the gap to 52-48, but Maske, who was a hero in the Kearney semi final win, swished a bucket to give Northeast a 54-48 lead and the lift they needed to win the game.

Omaha Westside, with a only a 14-8 record entering the '73 Dance, put together a spirited march to the finals and nearly pulled of the Cinderella storybook ending.

The 1973 All-State Basketball teams: Not Available at this time

Here is what we'll do for Class D and C. The All-Tournament teams were in the Sunday edition of the Journal and Star that year, so I'll list those players. Normally, the Class D all-state teams were in the Thursday Lincoln Star, "C" was on Friday, Class B on Saturday and Class A on Sunday. For some reason only the Sunday papers were available.

*How about 4 juniors on an all-tournament squad? If I recall, Olson and Peck both were on the all-state team and Yutan's Lastovica would be a good bet. As good as the Hawks were in '73, I probably would have included Dean Troester on my all-state team. Very crafty floor general for Jerry Eikhoff's crew. And Pleasanton's 6-7 Doug Kucera should certainly have been a consideration too.

*Very little doubt in this man's mind that Baumert and Jakubowski were included on the Class C all-state team. Ford certainly should been there and having seen Don Mrozcek on the hardwood a couple of times, makes me think he made the dream team also. Milford's Larry Heyen is another very good bet for "C" all-state. Just do not remember enough about Neligh's Morrison. That '73 Howells title team was nearly untouchable. What a high school basketball team.

*I can still remember Fairbury Coach Charlie Moore telling me that when Bob Siegel played a basketball game for the Jeffs, it was like a seventh or 8th grader playing in his very 1st game. That's how enthusiastic Bob was. In Siegel's 4 year stint at Fairbury, the Jeffs won 89 of 98 games and Bob Siegel played in 97 of those contests. For his remarkable career, Siegel scored 2,337 points for an average of 24.1 ppg every time he stepped on the court. How in the world can you do that in Class B? Siegel's point total still ranks #3 all time in this state. Ironically, Ron Simmons of Sumner is 2nd and graduated in 1964, yet Siegel's 2,337 points in 1973 ranked 2nd all-time to Bill Holliday.

During his career, Siegel's field goal percentage went from 49.7% as a freshman to 51.4, to 52.6, to 60% his senior season. He was also a terrific defensive player. What Bob Siegel did on the basketball court was mind boggling to say the least. Put simply, this man was one of the greatest Nebraska high school basketball players of all-time. There is NO debating here. Just fact.

This Class B group could score, even the second team members. Sidney's Seidel could put the ball through the hoop with deadly accuracy and regularity. The 6-6 dandy poured 693 points his senior year on 59% accuracy to go along with 11 boards a game. Rick Seidel ended his career with 1,582 point and you would be hard pressed to find a player from that area in Class B to to match that one except maybe Chadron's Moore. Speaking of Moore, he started his career at Chadron Assumption, but finished at Chadron high. Moore ended his career with an asounding 1,826 tallies. What portion of that came at Assumption, I'm not certain.

Crete's Wenz ended his fine career with 1,152 points and could nail outside shots for a 6-4 lad, although he is listed as a guard. And his Cardinal teammate Tim Edwards used his 1:57.0 half mile speed to manuever the hardwood and leave his opponents guarding air. Cozad's McKeone averaged 22.1 ppg for the Haymakers and was a prolific rebounder.

*Pretty rare in those days, or maybe any day, to see 2 members of the same team on an all-state list. But the Rockets had two distinct players that contributed in different ways for Northeast, who won another state title in 1973. Novak, the junior, was the unselfish floor general of Ed Johnson's forces who directed things much like a quarterback on the football field. If Novak had to score, he certainly could come through in crunch time. Speaking of crunch time, Tom Westover may have saved his best for the State Tournament where he scored 61 points, including 27 in a semi final win over Omaha Westside. In the district final vs. Lincoln High, the 6-3 marksman connected for 13 field goals, all long range, to score a critical 26 points and match his earlier district efforts against Hastings and North Platte. Westover was nearly unstoppable when he decided to launch his long bombs because of his lightening quick release, which may have been the best in the state.

The other junior on this team was Boys Town's left handed, cat-quick Fred Anzures. Freddy, a 3 year starter for Coach George Pfiefer, scored 960 points in his career, including 498 (21.6 ppg) his senior season. Beatrice Coach Neil Nannen called the 5-8 Roach "the best guard in the state". The quick, nimble-footed senior, was state singles tennis champion in the fall and used his fancy footwork to blow by defenders. Roach scored 413 points (19.6 ppg) his senior season with not much help offensively and ended his 3 year career with 1,074 counters. Another clutch player, Roach exploded for 30 points in Orange's District final win against GI and repeated his 30 point performance in a Beatrice opening round state tournament loss to Omaha Central.

Paul Potter was a holdover from the Discoverers State Championship team of '72 and was just as effective in 1973. Potter specializied in coming through when Columbus needed him the most. Check out these totals; 27 points and 18 boards against Lincoln High, 36 points/15 rebounds vs. South Sioux City, 32 and 17 against Grand Island, 30 and 15 vs. Ralston, plus 30/22 in a rematch against South Sioux.

So difficult was it to make the this 1st team all-state in Class A, that players like Rummel's Ed Burns. a first team selection the year before plus, the Class A all-state quarterback in the fall, Kearney's high scoring Loren Killion, Lincoln East's Rick Sameulson, and Omaha Central's Dennis Forrest were all relegated to 2nd team as was the Metro's leading scorer, Larry Vakulik (445 points/21.2 ppg)