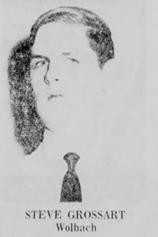 This is the 6th in a series of 50 years of all-state basketball and today we spotlight the 1970 high school all-state teams.

Class A saw Lincoln Northeast's Ed Johnson coach his forces to a 3rd title in 4 years, as the Rockets turned back a quick Omaha Tech team 64-54. That game, played at Omaha's Civic Auditorium, witnessed a balanced effort ny Northeast as all 5 starters scored in double figures. The Rockets, who survived 2 overtime District games to get to the State tournament, had their closest game during the Big Show in the 1st round when they slipped past Boys Town 57-56 on Maury Damkroger's basket with 4 seconds left. Tom Novak, who made the all-state team as a junior, once again paced the well balanced Lincoln Northeast team. Under the amazing Ed Johnson, the Rockets had been to the State tourney 14 of the last 21 seasons including the 1970 tournament.

Class B's final was a unequelled year for Cozad, as the Haymakers added a State Basketball Title to their mythical state football crown. Cozad thumped Laurel 78-69 for the "B" title when the Bears from NE Nebraska connected on only 11 of 28 charity tosses. The two teams both drained an identical 29 field goals, but Laurel's 39% from the free throw line doomed Steve Erwin and company. Erwin did score 31 points, but it was Cozad's Jack Lawless that dropped in 25 points, and Mike Sitorius' 21 tallies that lifted the Haymakers. The high scoring Cozad established a state tourney team record by scoring 240 points in the 3 games. The unbeaten, 22-0 Haymakers blasted Omaha Paul VI, 87-66 and Valentine 73-56 in earlier state tournament games. Pretty impressive group.

In Class C, Pawnee City was still in shock receiving their medals for nearly blowing a 9 point lead and the game itself in the final 2:43 seconds versus Henderson and high scoring Alan Regier. It took 2 free throws by junior redhead Roger Thiemann with 8 seconds remaining to seal the 49-48 victory and state championship. In an odd twist, both Pawnee City and Henderson were both members of the Southern Nebraska Conference at the time. And, strangely enough, there were only TWO Friesens in the starting lineup for the Huskies that year. No tall tale here, I saw a starting Henderson lineup one time that EVERY name was Friesen. No, not all brothers, but you can bet they were cousins. I still recall Homer Friesen from that 1970 Hensderson team....all 130 pounds of him. He made the Class C all-tournament squad. Must have lived on vegetables and water.

In Class D, a heavy favored Shickley romped through the tournament, save for the last half of the first quarter and most of the 2nd stanza in that championship game. The rampaging Longhorns battered Paxton 90-58 and Melbeta 81-51 on the way to the 61-44 win over Overton in the finals. Obviously Shickley set a team tournament scoring with their 232 points in 1970. Shickley ended up 24-2 this season, with losses coming to Friend and Meridian. Friend edged the 'Horns 38-36 the last day of January, then 2 days later Meridian laid 97 big ones on them in a 97-71. That one still has me scratching my head to this day.

Now, on to the 1970 All-State Basketball teams.

*Strange thing about this group was that only Shickley's ring leader, Lonnie Benson played in the State Tournament in 1970. Even though Benson averaged only 13.3 ppg, Coach Richard Ideus pointed out the leadership, ball handling and defensive abilities that the 6-0 senior possessed. Every player on that Shickley received a vote from some coach in the state for all-state considerson. Sterling's Boldt, who played in the shadows of Cal Christline in 1969, was ready to sparkle in 1970. Galen Boldt was at his best when Sterling played against Class C schools, which was half the schedule.

Cambridge sparkler Desmond was a sharpshooter who averaged 22 ppg but was very unselfish. His 1970 total of 506 points could have swollen to larger numbers had it not been for his keen inside/out passes to open teammates. That's why the Trojans were 22-2. Milligan's 195 pound Gary Filipi had been flirting with all-state status since he made the all-tournament team at State as a sophomore. The dead-eye Milligan Rooster averaged a heafty 27.5 ppg and exploded for 44 in a game. Filipi hit 58% of his floor shots that year and made 67% of his charity tosses.

Good Lord, honest to goodness, I do not think I ever saw a high school basketball player that had a more deadly shot than Wolbach's Steve Grossert....period. Yes, it was class D, but Grossert could drain a shot from anywhere on the floor with a player or two, or three, draped all over him. A record setting all-state Quarterback at Wolbach, Grossert connected on.....are you ready for this.......72% of his field goal atempts, most of which came from the 20-30 foot range. Can you imagine how many points the Mustang Gunner would have canned had there been a 3-point shot in his day? Steve Grossert scored 1,777 points in his career, 627 coming in 1970. Steve averaged 29.9 ppg for Wolbach but his team never made it to Lincoln. I saw this guy play more than just a few times in his career. I still dream about his shots, man. Trust me, Grossert WAS that good.

There were 3 seniors and 2 sophomores who nearly made this list in '70. The seniors were Elmwood's Dan Beck, Ryan Hawley of Republican City and Dorchester's Bill Boller. The sophomores were Odell's big Earl Spitsnogle, who would get his chance in 1971, and Corky Charles of Mead.

*Pretty lanky bunch, is this group and not one backcourt player. I did see Anderson of Arlington and he could have played almost an position on the floor. He averaged 21 points a game and pulled down a hair under 10 boards a contest. His team was 20-0 before losing in districts. Elkhorn's McArdle helped derail Arlington's trip to the state tournament in 1970. He averaged 17.6 ppg and 11 rebounds and still was able to score 13.4 ppg throughout his 3 year career for the Antlers. Former Hastings College head coach Mike Trader was on this Elkhorn team.

You want to talk rebounding? State Champion Pawnee City's Ganzel had to be the king, pulling down 17 a game to lead the Indians to their perfect 26-0 championship record. The 6-3, 195 pounder also conneced on 50% of his field goals for 436 points and an average of 16.8 ppg. Henderson's Alan Regier, "little" 6-5 inch brother to 1964 all-stater, Ron Regier, was the leading scorer on this dream team, averaging 21.7 ppg on 60% accuracy from the field. Milford's Mike Stutzman averaged a near identical 15 points and 15 rebounds a game for Denny Bargen's squad.

*This Class B Dream Team may have been one of the finest to date since these all-state teams were compiled. This mythical squad would have averaged 120 points an outing in 1970. The 3 seniors and 2 juniors combined to score an outlandish 2,563 points during the season. The leading scorer on this team was the amazing Jerry Clark of Imperial, whom many considered the best offensive basketball player in the state, regardless of class. The 6-4 senior averaged 31.9 ppg and scortched the nets for 55 points in a district game with Lexington. He scored 46, 45, and 44 points in games earlier in the season and was 20 for 20 one night from the free throw line.

There may have been some arguements about best offensive player in the state when Schuyler's Harmon came into the conversion. The Blonde Bomber played in 4 state tournaments and started as a sophomore for the famous Jolly Green Giants form Schuyler. The 6-7 post player averaged 24.4 ppg as a senior and scored 514 points. Harmon pulled 370 rebounds his senior season and was money on 60% of his FG atempts. Aurora's Kropp, who is now the head basketball coach at UNK, averaged 23.4 ppg as a junior for the Huskies and and grabbed 14 caroms a contest. Kropp would go on to play NBA basketball for Washington and was offered an NFL contract as well. Kropp is one of the finest high school athletes in all of Nebraska history. We didn't know that at the time though, did we?

Laurel's Erwin, a repeat selection, is another 4 year starter for his school who was 64-6 while he was there. Erwin scored 16.3 ppg while scoring 568 points and cleaned the glass for 441 rebounds. The late venerable Cozad coach Bill Ramsey was proud of his well balanced 1970 State Champions but was quick to give praise to Mike Sitorius. The 6-2 Sitorius was the top scorer for the Haymakers and came through when it counted.

Three players who would have been sure-fire all-state selections any other season were Crete's Artie Kubek, Omaha Cathedral's Hilary Howard, and Ron Coleman of David City.

*How about the Capital City having three selections on this team? Although these are Journal-Star selections, all 3 were very deserving for sure. Novak was a repeat selection from 1969 and his team won the Class A title. Novak was the team leader on a well balanced basketball squad that year. He increased yearly point totals from 202 as a sophomore, to 268 as a junior and 302 his senior year. Southeast's Adams caught fire the 2nd half of the season to earn his slot. After the Knights lost their first 6 games, they beat Northeast the first game following the holiday break. Adams scored 19 in that game and added 28 in the overtime district loss to Northeast. Adams also broke the school scoring record with a 36 point barrage against Kearney.

And how good was Lincoln East junior, Kent Reckeway? The 6-1 junior scored 92 of his 328 season total points in a 3 game span against state champion Lincoln NE. He scored 36, 33, and 23 in the three meetings. And if you thought Reckeway was good in 1970, you "ain't" seen nothin' yet.

All-State repeater Dave Rezac from Omaha South was money in 1970 too. Averaging 22 ppg, Rezac was considered a top college prospect. Top scorer of this group was, of course, Tyrone Pryor from Boys Town. Pryor had to be good to set a new Boys Town single season scoring record of 484 points. That was one of only NINE new Boys Town hoop marks set by Tyrone, who tallied 1,224 points during his 3 year career. Having seen Pryor twice that season, I marveled at his deadly accuracy from long range and the uncanny ability to make defenders looks helpless when he pulled up and launched his quick release, accurate shots. Smoooooth as silk man.