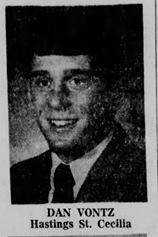 This is the 5th in a series of 50 years of all-state basketball and today we spotlight the 1969 high school all-state teams.

I saw all 4 state championships live in 1969, and the first to see was Larry Rathe's Sterling Jets run away from Clarks, 59-42 for the Class D crown. It wasn't that Clarks was a mediocre team, it was simply the fact that the Jets were a cut above everyone else in their class with the likes of Cal Christline and Galen Boldt. Two time all-state selection Christline scored 22 in that title contest and Boldt added 15 in the win.

Sterling, who competed in Class C in 1968, dropped to "D" and won it all. No shame in that. A first may have taken place in Class D in 1969 when Yutan freshman Rick Heldt made the "D" All-Tournament squad. The 6-0, 200 pound Heldt sure didn't look like a kid who wasn't even old enough to drive. The dude was a junior in a freshman's body. Quite the hardwood wizard for a youngster. Trust me on that one.

The Bluehawks from Hastings St. Cecilia took the Class C title in '69. I knew most of these kids and played against many on the football field and some in freshman basketball. Ralph Vincent's Bluehawks watched Brad McCardle's deep corner shot bounce off the rim at the buzzer to preserve St. C's 66-65 victory in the title game. I thought McCardle's shot was going to break every Bluehawk heart in the building when it left his fingers.

Big Dennis Pavelka, a 6-4, 220 pound hulk, scored 27 for St. Cecilia and his all-state buddy Danny Vontz nailed 13 free throws in that game to pace the Bluehawks. Only 5 players scored for the Hastings catholic school. Pavelka was so impressive in this state tournament that he was chosen to the all class All-Tournament squad......ALL-CLASS.

The Class B title was won by a Crete team who banded together and played united like never before after their all-state, leading scorer Dave Drego spent most of the game on the bench with foul problems. Scottsbluff transfer and playmaker Mike Shangeaux and troops rallied to pull away for a relatively easy 65-46 win over Cozad. By the way, the Haymakers had an all junior lineup that made it all the way to the finals in '69....obviously. How did they fare in 1970? Stay tuned and don't you peek now.

In Class A, Creighton Prep saw Omaha Central's Lee Harris score 17 of his team's 24 first half points. That was the bad news. The good news was Tom Brosnihan's Junior Jays held the Central scoring star scoreless in the 2nd half and proceeded to route the Eagles 74-48 for the Class A Championship. Prep placed 2 players on that all-tourney team and when the smoke cleared probably had their toughest test in a first round 71-63 win over Omaha Westside.

Now, on to the 1969 All-State Basketball teams.

*No mystery who was the sparkler of this group. Sterling's Cal Christline, a repeater from 1968, dropped in 717 points in '69 and ended his career with 1,912 points. Christline is still the 35th highest scorer in Nebraska high school hoops history. Not too shabby. And Christline shot nearly 49% for the year. Elmwood's Ferguson averaged 16 ppg and his defensive play aided Elmwood in handing Sterlings it's only loss of the 1969 season.

Loomis suffered an upset in Districts and didn't make it to Lincoln, but Tom Ridenour still averged 23.6 ppg and 17 caroms a contest. A four year starter at the pivot position, the 6-5 Ridenour was one of the Best of the West. Amherst's 5-9 Ken Bosshamer would have been a phoenom had he played in this era. The pure shooting ace connected on 262 of 597 field goal attempts, scored 638 points while hitting 78% of his free throws. I saw Bosshamer play and honest to goodness, 70% of his shots that night would have been 3 pointers in this day and age. A pull up, quick release, sweet shot that just could not be defensed by most teams. Bosshamer averaged 30.9 points per game....yeah. How many would that have been had their been a 3 point arc?

Callaway's Burback was simply a tough son-of-a-gun. He owned the paint on defense, averaging 20 boards a game and was only 5-11. And Burback wasn't bad when he shot the ball, connecting on 57% of his attempts for an average of 24.2 ppg.

Frankly, these 6 players were just a hair away from making this team. They were: Falls City Sacred Heart's Don Hill, Robin Stevens of Eustis, Randy Coleman of Paxton, Milligan's junior, Gary Filipi, Larry Snyder-Mead, and Wolbach's amazing Steve Grossart. Did you know Wolbach NEVER made it to Lincoln? Hard to believe.

*The Class C all-state squad actually had a position by position feel. Hebron's Dale Hasse, a repeat selection for 1968, would be the center. Despite Hasse missing 2 games and a good portion of three more with a dislocated toe,

Hasse still scored 479 points. The 200 pounder was an all-state football selection at tight end and it certainly helped on the hardwood. Haase muscled his way for 279 rebounds in 1969 and connected on 55% of his FG attempts, averaging 22 ppg. Haase's high game was 41 against Superior and the senior ended up scoring 1,316 points during his 3 year career.

Another all-state footballer was Wausa's Holmquist, one of the forwards on this team. He averaged 21 ppg for coach Dale Buller (later a coach @ Henderson) and rarely played more than half the game because of huge leads at halftime. Wausa hit the 100 point mark SEVEN times in '69. Holmquist also hit a sizzling 69% of his FG attempts for the year. Not bad, man.

The other forward was St. John's David Hahn. One of the best players in Eastern Nebraska, Hahn scored at a 22 points a game clip.

The guards were Vontz and Knipplemeyer. State Champ St. Cecilia's Dan Vontz was a dandy. Such a team player, yet Vontz scored 16, 22, and 21 points respectively in state tournament games. The quick handed Knipplemeyer led the Johnson-Brock defense with 65 steals and dished out 102 assists, huge numbers for that day. His team was 49-12 during his career.

Let me tell you, there were actually TEN, yes 10 other players, some in my opinion, who could have made this team. They are: John Mathes-Grant, Craig Buntemeyer-Deshler, Pat Elwood-Creighton, Roland Kramer-Elkhorn St. John, John Olson-Wausa, Lynn Spilman-Elkhorn High. I thought Dennis Pavelka of St. Cecilia came close. Also thought Osceola's Jack Cerny, Larry Krueger of Blue Hill, and Kevin Baker of Stromsburg were pretty salty too.

*By the end of the 1969 season, Schuyler's Harmon had already played in 3 state tournaments. He led the Warriors with a 20 ppg average this year. Crete's Drevo was regarded by more than one coach as one of the best players in the state, regardless of class. Drevo averaged 17 ppg and 15 boards a contest.

Maybe the most impressive on this dream group was Pius X standout Gary Walker. During the Thunderbolts killer schedule, Walker averaged 25.6 points a game. In a game against Class A State Champion Creighton Prep, Walker scored 34 points and nearly led his team to an upset win that night. So impressed was Prep coach Tom Brosnihan, he stated that Walker could have made the Class A all-state team. Good enough for me.

Laurel's Fahnstock led his team to 21 straight wins before running into Schuyler in Districts. Fahnstock threw down 26 ppg. Peterson was a skinny 6-0, 155 pounder who simply played much larger than his frame.

*Pretty darn rare in those days for two juniors to make the All-State team in Class A, or any class for that matter. Creighton Prep's Mark Langer simply had bloodlines. The handsome Prep senior followed the footsteps of his father, Ralph, an all-stater from Ainsworth in 1938 prior to an outstanding college career at Creighton. Langer averaged 14.8 per game on an extremely balanced Creighton Prep squad. A junior, Lincoln Northeast's Tom Novak, was a long range bomber for the Rockets, averaging 21 ppg. The other 11th grader was Omaha South's Dave Rezac and the 6-5, 195 pound Packer was a good one. Rezac, who was weakened from mono to start the season, rebounded to average 17.6 ppg and 14 rebounds for Cecil Stutzman's team. Rezac dumped 31 on Lincoln High the final game of the regular season.

Carlson scored 400 points for Westside on 54.6% shooting accuracy in '69. He was MONEY from the charity stripe, connecting on 86% of his shots from there. The 6-5 ace clanked only 18 times in his 132 trips to the free throw line. That's MONEY, folks. Omaha Benson's Johnson scored exactly the same number of points as Carlson.....400. He pulled 278 rebounds for the year and was a ball dribbling wizard for the Bunnies and a total pest when Benson decided to press on defense.