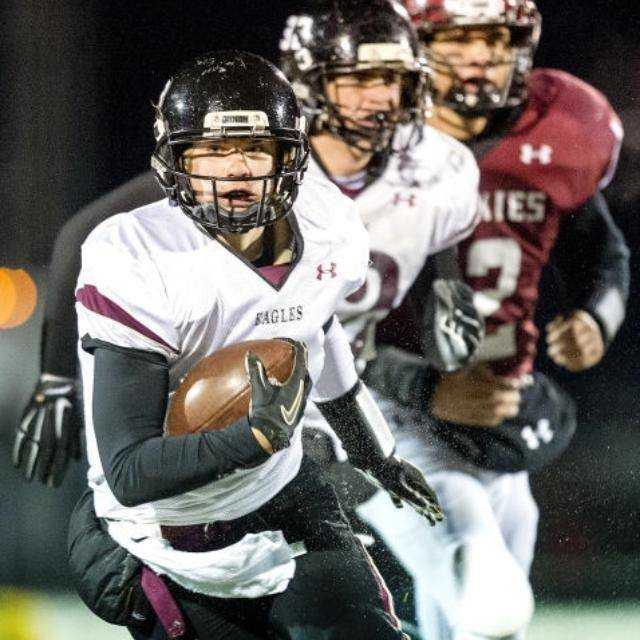 BDS quarterback Grant Norder (with the football) gains some real estate against Heartland.

Interceptions - Rohr and Kleinschmidt - 4 each

An 8-Man final just can't any better than this match made in heaven. Hemingford was here in the finals a year ago, losing a 20-18 heartbreaker to Exeter-Milligan. BDS, playing as Bruning-Davenport, was a steady playoff team during a 9 year stretch spanning from 2001 to 2009. B/D actually won a D-1 title in 2005, beating Sargent 34-12.

Hemingford waltzed their way through the regular season, steamrolling every opponent they played. The Bobcats had a scare in the 1st round of the D-1 playoffs, having to stop a late Blue Hill drive to hang on for a hard fought 12-6 victory. When the going gets tough and the weather gets frigid and nasty, Hemingford leans on Ethan Skinner big time. The 200 pound bulldozer with speed has averaged 35 carries the last 3 playoff games and has responded with 692 yards and 6 Tds. Bobcat head coach Jordan Hass will feed Skinner the ball 50 times if he has to and the 'Cat front line of (left to right) Jacob Horstman, Asa Carlson, Denton Payne, Tanner Benge and Colt Foster will clear the pathways. Skinner is a player that could start for any Class A team in this state, including Omaha North and is certainly a small college prospect at least.

The Bobcat's Brady Turek is a vicious blocker and quarterback Matt Wood is a very accurate, pinpoint passer although not called upon often to throw. Consider this statistic about Woods aeriels. The rangy senior has completed 33 of his 52 tosses in 2014 and nearly half of those have been for scores (16).

When Matt Wood throws, he means business. His favorite target, the 6-2, 210 pound Colt Foster, could probably be a 1000 yard receiver if he played for a passing team. This team can score on you in so many ways and create turnovers to win football games.

BDS is finally healthy and has their full team intact for the first time this season. Didn't happen till the 2nd round of the playoffs when the Eagles played Bloomfield. One key on both offense and defense alike is the return of emotional leader #50, Ben Elznic. The high octane junior OL/LB with the new Mohawk haircut suffered an injury in the opening moments of the Friend game October 10th, a game BDS went on to drop 36-34. Elznic missed the next 3 outings including the 1st round playoff game vs. Omaha Christian Academy. With the 6-1, 185 pound dynamo healthy and rarin' to go, the Eagles are just that much better, especially on defense.

The cog in this BDS machine is without a doubt quarterback/defensive back Grant Norder. As previously mentioned, Norder has a football IQ near the gazillion mark and always seems to be in the right place at the right time when the Eagles need it. Norder has completed 56% of his tosses for over 1,600 yards and out of 94 completions, nearly every 3rd throw goes for six. Talk about 2 quarterbacks that know how to find their receivers and make the most of their throws.....Norder and Wood are just that.

You certainly don't want the ball in Norder's hands when he runs either. Duel threat quartertbacks in high school are lethal to opponents defenses.

This is another game that has "down to the wire" or overtime written all over it. Will Elznic or Norder come up with a big turnover for BDS? Could it be a kick or punt return by Hemingford's Skinner or Turek decide the outcome? As the sun starts sinking in the west above the land of the Huskers next Monday afternoon, fingernails will be chewed to a nub in those Memorial Stadium seats. Can't wait.