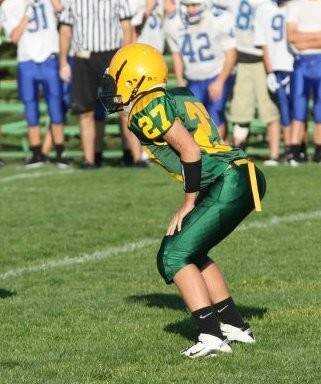 Kearney Catholic's Nate Howe (#27) returned for some unfinished business in the Stars' loss.

In a semi final match-up between two potent defenses something has to give. On a night that saw 15 total tackles for losses that limited both offenses, it was the defense and special teams that came through for Boone Central/NG. First, it was a 42 yard pick-six by senior linebacker Travis Kennedy 3 minutes before halftime, then an electrifying 89 yard kick return by Wyatt Mazour to begin the 2nd half of play that set things in motion for Boone and led to a 34-7 victory over Kearney Catholic.

When your normally efficent offense posts only 242 yards on the night, the Cardinals found other ways to put points on the board and the result was a trip to Lincoln to face Ashland-Greenwood in the Class C-1 State Championship game.

Kearney Catholic started the game with the offensive line blowing big openings for 3rd string running back Bryce James, a convered wide receiver. The speedy junior, who missed nearly the entire month of October and was on crutches as recently as the middle of last month, broke loose for an 81 yard run down the home sidelines that set up Stars at the Boone Central/NG 5 yard line. But the Cardinals held and forced Kearney Catholic kicker Grant Buschkoetter into a 24 yard field goal attempt. Boone's Mr. Clutch Zac Glidden spoiled the attempt with a perfectly timed block and the Cardinals were turned away.

Five minutes later Kearney Catholic, set up with excellent field position at their own 41, pieced together a 9 play drive that ended with 6 yard TD pass from QB John Masker to the swift James. The Stars dominated that first quarter and led 7-0 at the end.

Boone Central/NG executed a nifty 80 yard drive in the 2nd stanza, keyed by the running of Mazour and Joseph Brugger. Mazour found Colton Pelster in the right corner of the end zone with a 5 yard scoring strike with 5:32 left before halftime to square things up at 7 apiece. But on the next Kearney Catholic possession, the Stars had the ball only 2 plays before Zac Glidden picked of a Masker aerial and returned the interception 42 yards to the house. The Stars blocked the point after try by Kyle Kramer, but Boone took a 13-7 lead into the halftime intermission.

What transpired on the first play of the second half may have have broke Kearney Catholic's back. The ever so dangerous Wyatt Mazour fielded the 2nd half kick-off from his own 11 and 14 seconds later took that baby to the house nearly untouched. Within a blink of a Kearney Catholic eye, the Cardinals had a 19-7 lead and never looked back.

Disaster struck the Stars on the following possession when a bad snap on a punt attempt was gobbled up by Boone Central/NG on the KC 30 yard line. It took only 5 plays and a minute 47 seconds for the Wyatt Mazour to take it 18 yards, then 12, and finally the last 10 yards for a touchdown. The Cardinals even had a 10 yard holding penalty during the short possession. With the clock showing 8:36 seconds in the 3rd frame, Boone Central/Newman Grove had the lead up to 27-7 and you could feel the momentum switching for good.

Wyatt Mazour walked in from the 4 yard line with 10:45 left in the game to extend Boone's lead to 34-7. The all-state QB completed a couple of nice passes during the drive including a 30 yard TD strike to Glidden that was called back because of a hold.

To make matters worse for Kearney Catholic, defensive back Damian Backus pirated a John Masker pass on the very first play of the following KC possession. Neither team could put points on the board the rest of the way and Boone Central/NG secured their 12th victory of Coach Arnie Johnson's farewell season and punched their ticket to Lincoln.

What transpired on the game's final drive was nothing short of a miracle. Kearney Catholic's marvelous running back/linebacker Nate Howe, who was injured in the GICC game nearly a month ago (October 10th) , came on the field with only a minute 30 remaining. The word around the state was that Howe had broken his leg and would miss the remainder of the season. The heartbreaking thing besides the ending of the season for such an outstanding player was that Howe had 990 yards rushing when his injury occurred. I'm sorry, but that just isn't right.

Anyway, Howe had carried for a 4 yard gain on the drive prior, but came in to gut it out and attempt reach for that coveted 1000 yard mark. #27 was stopped for a yard gain on his first carry but then blasted through the Cardinal defense for a 10 yard gain to put him over the 1000 yard mark and finish with 1,006 yards rushing for the season. If there is any silver lining in the Kearney Catholic loss Friday evening, it had to be that courageous effort by Nate Howe. You just do not see that magic too often on the high school gridiron. I can now sleep tonight know Mr. Howe got his 1000 yards.

Wyatt Mazour was "held" to 82 yards on 15 carries but still managed 2 rushing TDs and the back breaking 89 yard kick return for a 3rd score. Joseph Brugger added 38 yards for BC/NG. Mazour also completed 9 of 16 passes for 107 yards and a score. The Cardinals could muster only 243 yards of total offense, but when you have a defense and special teams that pick up the slack, it means a "W".

Kearney Catholic's ground game was led by junior Bryce James who rushed 15 times for 104 yards and also scored on a pass reception. Quarerback John Masker, who was hounded all night by the relentless Cardinal defense, conneced on 10 of 21 throws for 89 yards with 2 interceptions. The Stars had only 203 yards of total offense but really played well defensively for the most of the game, although the final score would not indicate it. Kearney Catholic fought through injuries for an outstanding 10-2 season this fall and further demonstrated the spirit of that school.

Boone Central/Newman Grove advances to the C-1 final Tuesday, November 25th at Memorial Stadium for a 2:45 game with Ashland-Greenwood, who topped defending champ Cozad by the identical score of 34-7. Many sports scribes predicted this final match-up weeks ago.