Ashland-Greenwood rides the wind, stifling defense to 37-7 win over GICC. 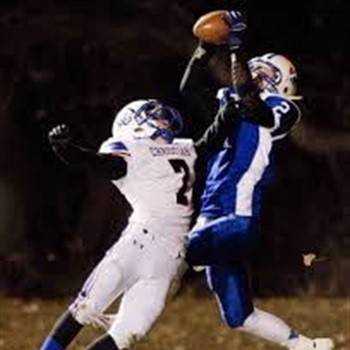 Ashland-Greenwood's Tyler Craven (blue uniform) leaps high in the air for a reception.

Oh, that old devil wind. Sometimes it can be your worst enemy, other times your best friend. On a windswept, warm afternoon in Grand Island, Ashland-Greenwood turned a wind-aided 2nd quarter into 24 points and never looked in the rear view mirror for a convincing 37-7 win over Grand Island Central Catholic.

After Ashland-Greenwood stopped the Crusaders on their 20 yard line, it took only 6 plays for 1000 yard passer Bryce Chudomelka to go to work. After all-state defensive ace Youhanna Ghaifan spilled the Bluejay QB for a 6 yard loss, Chudomelka bounced back 2 plays later with a 20 yard completion to Cory Washburn, who should have been credited with 2 receptions on the play. Washburn jumped high in the air to field the pass, tipped it up, then actually caught it again for the gain. The very next play the senior signal caller nailed Ben Stille on another 20 yard pass, then found Craven beyond the GICC secondary for a 26 yard TD.

After the A/G defense held once again, it took only a single play for the Bluejays to strike next. Sending 3 receivers flanked out to the left, the crafty Tyler Craven took a short stutter step back, then blew by his GICC defender for an easy 40 yard touchdown reception. With 4:38 left before halftime, Ashland-Greenwood was up 14-0.

After stuffing Central Catholic on their own 13, the wind caught a Josh Arends punt and blew it down at the Crusader 24. Net 11 yards. 4 plays later, 1000 yard rushing sophomore Trevor Nickelsen bolted in for a 9 yard score and it was 21-0 with Stille's point after kick.

Ashland-Greenwood added a Ben Stille 34 yard field goal with on 1.5 seconds left in the half to take a 24-0 lead into the break.

It wasn't like GICC didn't have their chances, in that 1st quarter especially. On their 1st possession, the offensive line opened nice holes for RBs John Pfeifer and Dillon Rork. But a stiff defense by the Bluejays and a missed 28 yard field goal attempt by the normally accurate Bryce Sealock resulted in a come-up-empty possession. The Crusaders were driving again to start the 2nd quarter, but a stripped football and fumble recovery by Walker Fisher at the A/G 18 put the stops on that drive.

GICC opened the 3rd quarter with a nice 71 yard drive mixing the run and pass well. QB Brady Brokaw swept his left end and out legged the defense for a nifty 27 yard touchdown that cut the lead to 24-7. But Ashland-Greenwood answered right back with another Trevor Nickelsen Td, this one coming from 4 yards out. The outstanding sophomore, who came into the game with 1,411 yards rushing, had 34 yards on the 57 yard drive.

The Bluejays added a 1 yard TD blast by sophomore OL/DE Brett Kitrell in the final stanza, who deserved the reward for his outstanding linebacker play. Let me tell you something about Mr. Kitrell. He has two older brothers, one at Nebraska (Bo) and the other at Tulsa (Blake). These Kitrell boys were just born to play football. This season the A/G sophomore Brett Kitrell, a 245 pound dynamo, has recorded 77 tackles, 14 for losses and 4 sacks. Tough kid.

Grand Island Central Catholic finishes the 2014 season with a very fine 8-3 record and an outstanding win over Kearney Catholic that seems even more impressive after the Stars clipped Columbus Scotus Friday afternoon. The Crusader defense did very well stopping the Ashland-Greenwood running attack, limiting them to 125 yards. Youhanna Ghaifan turned in another stellar performance on that side of the ball and proved he may be one of the best in the state at his position. QB Brady Brokaw just couldn't get the GICC passing game on track, completing only 8 of 17 for 95 yards with 2 interceptions. Brokaw did finish the season with an unofficial 1,747 yards passing (an apparent school record) and 15 TDs.

For Ashland-Greenwood, it was a sterling performance by wide receiver Tyler Craven on both sides of the ball. Craven hauled in 6 receptions for 116 yards and 2 touchdowns, but came up big on "D" limiting 700 yard receiver Ghaifan to just one catch of 12 yards and frustrating the Wyoming recruit in the process.

Trevor Nickelsen led the A/G ground attack with 83 yards on 23 carries and 2 TDs. With the win, the Bluejays earn a rematch of last years C-1 State Championship with Cozad. The Haymakers beat Ashland-Greenwood that afternoon 47-21, but the Bluejays will be on home turf next Friday for a chance at redemption and payback. Cozad beat Chadron 41-17 Friday in Cozad. Game time has not been set as of yet.