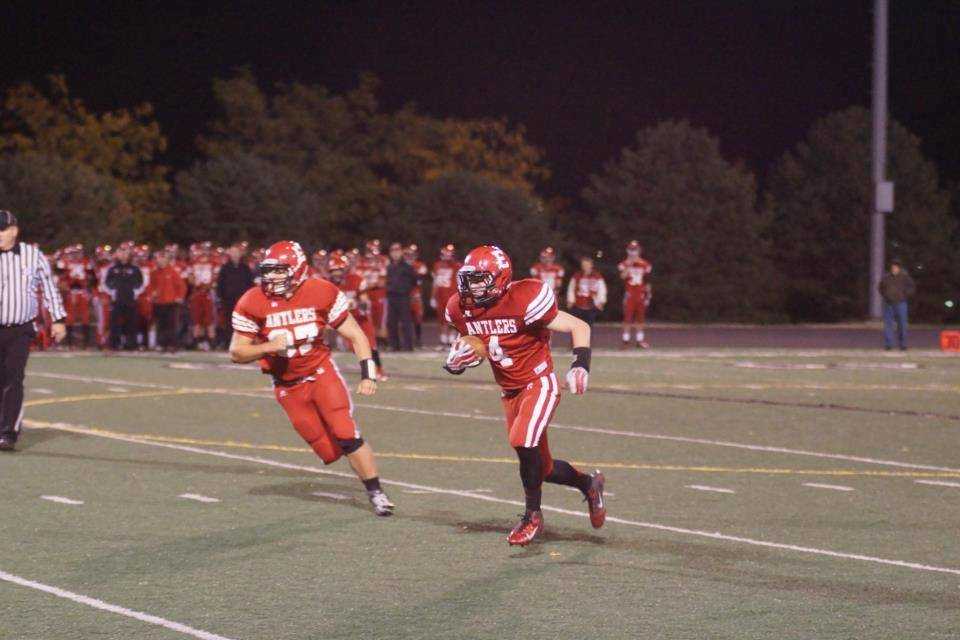 Elkhorn RB Chase Hazlewood (#4) on his way to a long gainer.

In a bone crunching battle of defensive wills that refused to fold, it came down to Elkhorn Antler kicker Kyle Hill. With nerves of steel and only 4 seconds remaining in the game, 185 pound senior lined up and calmly repeated the same thing he did to start the game....kick a field goal. But instead of giving the Antlers a 3-0 lead, Hill's 20 yard beauty gave Elkhorn a gut wrenching 1st round playoff victory over an awful good York football team.

After a 1st quarter that saw the Dukes sprint out to a 14-3 lead despite losing their 1st starting quarterback, Elkhorn fought back with their usual potent, punishing ground attack that has gotten it done so many times in the past. If York wore down in that 4th quarter, you had to be down on the field to tell and then maybe not. Glen Snodgrass and his York forces fought till the finish but just couldn't stop the onslought of that vaunted Antler running attack in the final 4 minutes, 23 seconds.

On the coldest day of the 2014 high school football season, the defenses were heating things up in the first quarter of the late autumn afternoon Class B playoff game at Elkhorn Public Stadium. The Dukes immediately held Elkhorn to a 3 and out. But when they took the ball on their 1st possession at the York 33, sophomore QB Damon Kaliff had his initial aerial picked off by Chase Hazlewood, who returned it to the Dukes 12 yard line. The swarming York defense held and Elkhorn settled for a 26 yard Kyle Hill field goal.

On York's next possession, Kaliff rolled around his left side and reeled of a 13 yard gain but it would be the last carry of his season. The McCool Junction 8-Man football transfer suffered a torn ACL on the play and never returned. The Dukes didin't miss a beat though as 145 pound junior Nic Pettygrove took over and promptly drove his team 50 yards to score. Tough running Jonah Otte took it the final 3 yards for the touchdown and York had a 7-3 lead. On the 1st play of Elkhorn's following possession, the hard hitting York defense forced an Antler fumble, then went 47 yards on 9 plays, adding another TD against a stunned, slower looking Elkhorn football team. Otte had 23 yards on the drive, Jackson Coffin broke a 17 yard gain, and QB Pettygrove completed passes of 9 and 7 yards before 180 pound sophomore Alex Kowalski blasted in the end zone from the 1 to give the Dukes a 14-3 lead. The 11 point advantage would hold until the end of the opening quarter.

The second quarter was classic Mark Wortman/Elkhorn High grind it out football. The Antler offensive line came to life and begin to open holes for rugged, downhill running senior Chase Hazlewood. Elkhorn ate up 4 minutes and 1 tick and 11 running plays before QB Kyle Janvrin skirted 10 yards around the left side for a score. The Antlers were back within 14-10 with 7:59 left in the half.

Elkhorn would score again with just 34 seconds left in the half when TE/DE Anthony Sufficool grabbed a 7 yard TD reception from Janvrin. The Antlers went to the halftime locker room with a 17 -14 lead.

The 3rd quarter was the classic defensive clash many expected. The battle of immovable wills. The only score was a 31 yard field goal by York freshman Jorre Luther. Entering the money quarter these two Class B toughies were all square at 17 and the seat belts were fastened by fans from both schools in the tightly packed Elkhorn Stadium stands.

BUT.......the turning point of the football game may have actually occurred with 2:12 left in that 3rd quarter. With York back to punt, Antler senior Jack Morock broke through untouched to block the punt. Elkhorn actually took over at the York 45 and drove 6 plays before Hazlewood blasted in from the 4 yard line on a 4th and 1 on the 4th quarter's 1st play. Junior tailback Drew Smith was the catalyst on the drive with 36 big yards. Elkhorn 24-17.

The never-say-die Dukes were not close to throwing in the towel and responded with an unbelievable answering drive. Beginning on their own 3 yard line following a holding penalty, the Dukes mixed the run and the pass, survived back to back five yard penalties, and consumed a monster 7 minutes, 17 seconds and moved 97 yards on 18 plays to score with Jonah Otte fittingly taking it in from 3 yards out. Luther added the point after, and with 4:23 showing on the clock, York and Elkhorn were once again tied, this time at 24-24.

Now came another Mark Wortman, all run/no pass drive. Beginning with excellent field position on their own 35, the Antlers worked the clock with the precision of a vintage Nebraska 70's football squad and drove all the way to the York 3 yard line after Chase Hazlewood pushed the Duke pile to that point. The Elkhorn offense masterfully split the carries between Hazlewood, Drew Smth and QB Kyle Janvrin. SE Nick Anderson did have the big play of the drive on a 27 yard end around that stretched from the Antler 37 to the York 36. Now the stage was set for Kyle Hill.

Twice, Hill lined up for the field goal attempt only to be frozen by two York time-outs. But the next time on the field proved to be the charm as the dead calm senior stepped up and booted the 20 yard game winner through the uprights.

For the Dukes, who finish the season 7-3, Jonah Otte led the way with 131 yards rushing on 21 carries and a TD. Sure-handed, sure-fire all-state wide receiver JJ Schulz was able to haul in 3 receptions for 34 yards. The York season was a splendid success considering the wholesale losses the Dukes suffered through graduation. Another reason to repeat that Glen Snodgrass is simply one of the best coaches in the entire state.

Elkhorn was paced by the tough running of #4, Chase Hazlewood, who powered his way to 137 yards on 26 carries and a TD. Drew Smith added 71 yards on 17 touches. The Antlers attempted only 6 passes, completed 3, one of which was the 7 yard TD strike to Sufficool.

Elkhorn will travel to Gretna next Friday to play a Class B quarterfinal game. The 2 teams met just 3 weeks ago in Elkhorn with Gretna winning that contest, 17-14.