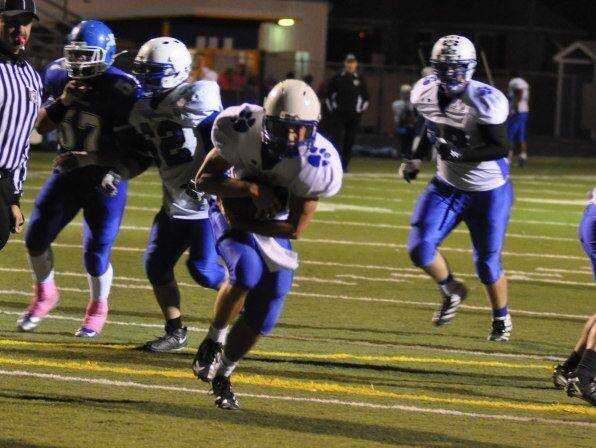 On an unseasonably warm October night for a high season finale, Kearney high rode the wheels of senior quarterback Jacob White to best once beaten Norfolk 37-24. The Bearcat signal caller, part of a dual QB system employed by Kearney coach Brandon Cool, rushed for 182 yards on 17 carries and hit the end zone on runs of 18 and 29 yards to wrap up the Class A District 2 title. And what prize do the Bearcats reap for their win tonight? A turnaround rematch with the Panthers......in Norfolk.

The Panthers, employing a dual quarterback themselves, were forced to do so when ace starting QB Gunner Fuelberth was lost for the season a week ago with a torn ACL. Sophomore basketball standout Lane McCallum and reserve teammate Tayen Meyer tied to take up the slack, but the lack of playing experience severely hampered the Panther effort and understandably so.

After Norfolk took a 3-0 1st quarter lead on a 20 yard McCallum field goal, the Bearcats reeled off 23 straight second quarter points and never looked back. Panther sophomore quarterback Meyer, who came in off the bench a week ago and threw for 3 scores, actually looked pretty sharp on a 4th quarter drive, completing 4 straight passes, the last one being an 8 yard TD to Aaron Wilken. For the evening, Meyer did complete 7 passes for 78 yards, but Norfolk was only 8 of 23 for the game between Meyer and McCallum.

The game was marred by a ton of penalties, many by the usually disciplined Kearney defense. The 'Cats were only 8 of 19 for 94 yards in the contest, but sometimes season finales, especially involving rivals, can get a little strange.

Kearney enters next Friday's playoffs with a 6-3 record. Norfolk will go in at 7-2. The game in Norfolk will be part of a double-header, with the other game involving C-1 powerhouse Norfolk Catholic and a yet to be named opponent. The NSAA playoff brackets should be released before the clock strikes noon on Saturday.