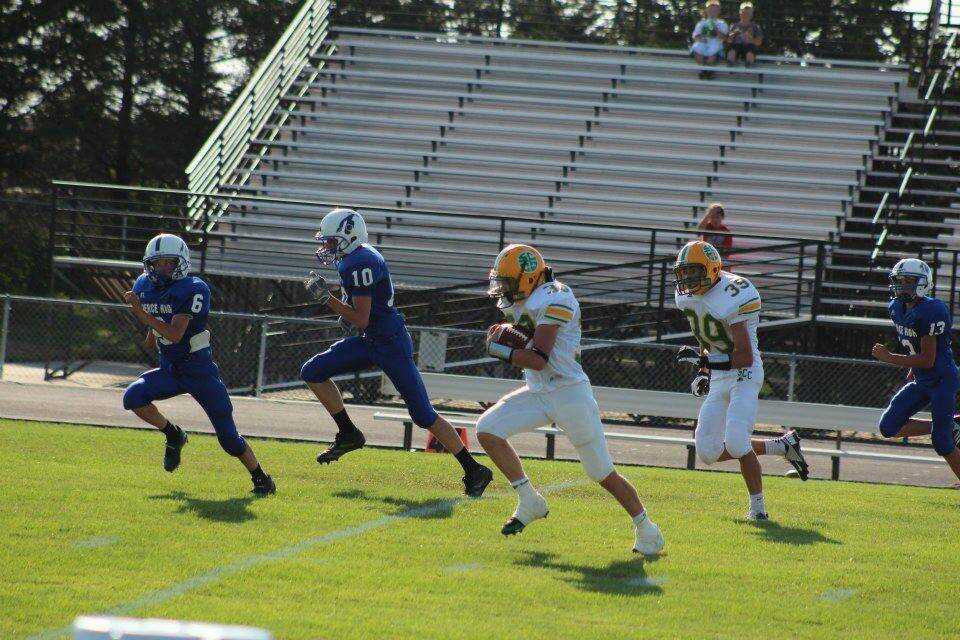 Columbus Scotus Jake Bos is off to the races.

After battling to a 7-7 defensive stalemate for three quarters, Columbus Scotus unleashed fullback Jake Bos and scatback Brady Pelster on long scoring runs to knock the Pierce Bluejays from the ranks of the unbeaten. In a game that featured goal line stands, a blocked punt, a fumbled punt, a long return of a stolen fumble after a pass reception and a splendid display of immovable defensive wills, the Scotus Shamrocks came away with a 28-14 victory. On an unusually very warm, humid September homecoming night, it was the crisp offensive 4th quarter blocking of the Scotus offensive line that made the difference. The usually stubborn Pierce defensive front was frozen for an instant on three different occasions in that money quarter that enabled Jake Bos to break loose for 2 long distance runs and speedy junior Baeley Pelster for another. It was the powerful, "faster than you think" Bos that iced it with his back breaking 62 yard TD sprint with 4:44 left in the game.

After allowing Class C-1's #1 Boone Central/Newman Grove 31 points in an opening game loss, the Scotus defense reeled off two defensive gems in beating C-2 powerhouse David City Aquinas and Central City. Pierce had it's offense in high gear through 3 easy wins thus far, but it was the Bluejays "D" that was the sparkler as usual. So the stage was set for a low scoring, battle of the defensive wills and through the first 3 stanzas and that is exactly what transpired. Scotus scored first when the Rocks stopped Pierce cold on a fake punt at midfield. With the good field position, Scotus rode the running of Bos, Pelster, QB Jared Duran and Cole Harrington to hit the end zone 1st. Pelster did the honors on a 3 yard run with just 21 seconds left in the opening stanza.

On the Bluejays 2nd position of the 2nd quarter, 155 junior Austin Freeman took a deep pitch on a reverse around right end and caught the Scotus defense off guard on an 82 yard prance to the house. After Scotus Grant Lahm uncorked a 66 yard punt to the Pierce 2 yard line, the Jays put together a nice 77 yard drive that fizzled at the Scotus 19 when Johnnie Huff's 36 yard field goal attempted was just wide left to end the half.

Both teams had 3rd quarter scoring opportunities that stalled at the opponent's 1 yard line. Scotus opened the 3rd quarter by marching 62 yards to the Pierce 1 before a muffed handoff caused Brady Pelster to lose a fumble. The Rocks held Pierce deep on the following possession but lost a fumble on the ensuing punt and Pierce was in business at the Scotus 39. Bluejay quarterback then found a streaking Austin Freeman on a 34 yard pass completion to the Scotus 5. But Pierce lost a fumble 2 plays later that rolled into the end zone before being pounded on by a Scotus defender.

That may have been a turning point in the game when the Shamrocks took over at the 20 with 3:28 left in that 3rd frame. Jake Bos, who went out toward the end of the 1st quarter with an injury, returned on the drive and broke things open with a tackle breaking 47 yard scoring dash on the first play of the 4th quarter. That gave Scotus a 14-7 lead.

It looked as if the Rocks were going to break it open when defensive standout Ryan Mustard a 190 pound junior, broke through and blocked a Bluejay punt. But Scotus was called for a hold and Pierce maintained possession..for one more down. On the ensuing punt, Cole Harrington mishandled the punt at the Scotus 22 and Pierce recovered. 5 plays later Taggert Bailey nailed tight end Braden Taylor with an 11 yard TD pass. Taylor caught the ball near the far sidelines after drifting all the way across the field.

Once again the two ranked C-1 teams were tied, this time at 14 and 8:25 remaining in the contest.

It took only 4 plays for Scotus to pull the old Ron Mimick/Aquinas double handoff to Baeley Pelster, who then sprinted 53 yards for the go-ahead score, 21-14 with 6:16 left.

Jake Bos broke the Jays back with the 62 yard blast up the middle less than 2 minutes later to give Scotus the 28-14 lead. After Mustard sacked quarterback Taggert for a 6 yard loss, the Pierce sharpshooter connected with Brady Starkel on a screen pass only to have the ball stolen out of his hands by Scotus FB/LB Marcus Dodson. Dodson rambled to the Pierce 12 yard line. After Tanner Spenceri carried 8 yards to the Pierce 4, then to the one yard line, 1st year head coach Tyler Linder displayed some "Bonnies" class by having Jared Duren take a knee to end the game.

This was a big win for Columbus Scotus. Anytime you beat a Mark Brehmer Pierce football team by 2 touchdowns, it's a huge "W". Pierce did flash some pretty sparkling passing in the contest with 145 junior fireballer Taggert Bailey completing 17 of 24 aerials for 204 yards and a touchdown. But it was the running game by Scotus that had to please young Tyler Linder. The Rocks piled up an unofficial 318 yards on the ground, buoyed by Jake Bos' 157 yards on 11 carries and Baeley Pelster's 110 on 12 totes. Austin Freeman led Pierce with 104 yards on 9 touches that included the 82 yard TD dash. QB Bailey added 41 rushing yards.

Scotus, now 3-1, heads to David City High next Friday while the 3-1 Pierce squad will return home to face 2-2 Wayne before meeting powerful Boone Central/NG in 2 weeks. The Bluejays have a date with rival Norfolk Catholic on October 17th. Scotus will be back at Pawnee Park in 2 weeks to host rival Wahoo Neumann.