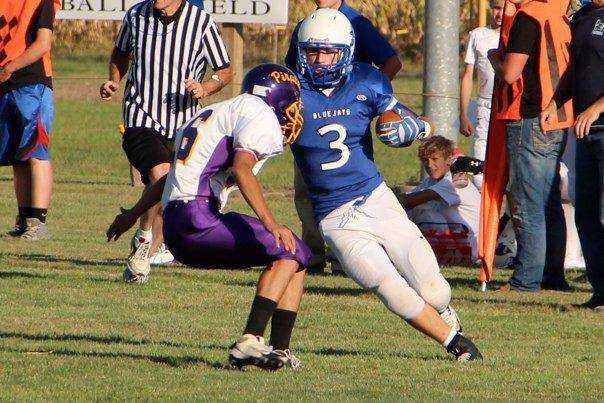 Today we cast the bright light on 5 more talented running backs who return to help their team reach new heights in 2014. How I wish I had the information in my hands to list every single lineman who open the holes for these guys. As long as they know it and give the boys up front the credit they deserve, I'm happy. Never met a running back that didn't love that bunch up front.

Now let me tell you about these gentlemen.

Only Omaha North, Cozad, and Doniphan-Trumbull rushed for more yards than the Red Raiders did a year ago and all three won state championships. Arguably, Sidney had the best 1-2 running back punch in 11-man football with Logan Lewis and Chance Anglin. Between the two they amassed an unreal 3,349 yards on the ground in 11 games. Anglin, who is probably heavier than the weight I listed, averaged 18 carries a game in 2013 while scoring 12 rushing Tds.

Heavens to Betsy can this kid run! Chance Anglin comes off that wing slot in the Red Raiders' double-wing offense and he slips and slides, he stops and glides. Sidney ran that offense so well a year ago and by the time Anglin got the ball coming across the backfield, the defense was already off balance. This young man is one of the sweetest stop and go runners in the state. #34 can put on the skids on, almost coming to a complete stop, then turn on the after burners and take off in a puff of smoke. Without a doubt, one of the top vision runners in the West. Anglin is so good at reading his blockers and once a defender makes contact, this guy knows how to wiggle free. At times Anglin almost looks like an All-NHL hockey player skating down the ice, gliding past defenders. So much fun to watch!

Anglin's best outings came in the opener against GI Northwest and a 52-42 shootout against Alliance. #34 bolted for 234 yards vs. Northwest, scoring 4 Tds. In the big Alliance game, Chance ran for 193 big ones and scored 3 times. The multi-talented Anglin is also a dangerous kick return man, averaging nearly 18 yards a return in 2013.

One huge plus for Anglin is that the man that runs the Wing-T, quarterback #11 Lane Harvey will be back to direct things this fall. Harvey is a slick as they come when he hands off that pigskin and Anglin is the man who will benefit the most this fall. It was so good to see this football program enjoy the phenmenal success they had a season ago. It was a long time coming.

Quick, compact and fast, Nick Arlt is nearly impossible to hold under a 100 yards when he steps on the football field. In three years for the Knights, Arlt has rushed for 3,488 yards and is within 1,512 yards of joining the 5000 yard career rushing club. Only 28 backs have been down that path in the history of Nebraska high school football. Yes, Arlt is that good.

Anybody that can run 26 times for 183 yards, catch 7 passes for 64 yards and return 3 kick-offs for 64 yards against David City Aquinas has to be good, period. #12 ran for 1,750 yards as a sophomore friends. Arlt is also a terrific wrestler, finishing runner-up in the 152 pound weight class in Class C this winter.

Arlt lines up as the lone back in that Oakland-Craig backfield and this year's senior class with Arlt's classmates looks to be very talented and loaded with experience. This year OC is in C-2 District with Laurel/Concord/Coleridge, Homer, Ponca, Stanton, and Wisner-Pilger. The Knights non district slate still includes tuffies like Fremont Bergan, Battle Creek and Crofton, so Oakland-Craig will be battle tested by the time playoffs come around. One comforting thought for had coach Joe Anderson is that through thick and thin Nick Arlt will be around to perform his magic for the Knights. Strong, durable and nearly impossible to hurt, Arlt should shine in 2014. #12 is one durable, hard running back that will etch his name in some pretty impressive circles when this year is in the books.

To be honest with you, stats are few and far between coming out of the WPGACC camp. With that said, I can tell you that Hass is not the 1st sophomore at Guardian Angels CC to gain a 1000 yards and won't be the last. Since dropping to the 8-man ranks 5 years ago, the Bluejays have fashioned a 46-11 record and a D-1 State Title (2010) to go along with it. Surprisingly enough, they have not had that many 1000 yard runners, so Tanner Hass can do some damage in the West Point GACC rushing record books.

I do know the Bluejays ran a 2 back offense a year ago and that was backfield the beneficiary of a very good offensive line. This Hass kid follows his blocking well and it would be safe to say that #3 will enjoy a 1000 yard junior year. One thing that does benefit this school is depth. Last season the Bluejays had a whopping 44 players on their roster. No wonder they are able to play seven junior varsity football games, which is almost unheard in the 8-man ranks.

This guy has been around through thick and thin with the Huskies and 2014 should be the best yet.

Last year Heartland breezed to a 7-1 regular season record with a high octane offense that averaged 58 points an outing. Not many teams rush for over 3000 yards in a season but the Huskies backfield rambled for 3,085 in 2013. Tyler Brown and his Huskie buddies nearly upset the mighty West Point Guardian Angels CC in the 1st round of the D-1 playoffs before falling 50-48 in a game I should have attended.

Tyler Brown usually lines up dotting the "I" behind rugged running and powerful blocking Keshawn Camacho, a 205 pound fullback. There doesn't have to be much of an opening for Brown to squirt through and he does it so quickly that the defense just fails to react in time. And that equals 6 points. Brown only carried the ball 126 times to get those 1,319 yards last season and if you do the math that's 10.47 yards a pop. The swift junior also caught only 5 passes in 2013, but 2 went for touchdowns, one of which was a 22 yard beauty against a powerful McCool Junction squad.

For his career, Tyler Brown has averaged 9.9 yards/carry, 15 yards a reception and has made 133 tackles, some of which were of the bone jarring variety. Amazingly enough, Brown has carried the pigskin 185 times in his career and fumbled only three times.

Keep an eye on the Henderson Heartland backfield this fall. They actually have the rare opportunity, and it is truly rare, to boast THREE 1000 yard rushers in the same backfield. You don't even need all the fingers on one hand to count how many times that's happened in the history of Nebraska high school football.

Ooooohhhh what a fool you would be to tackle this young man anywhere above the belt. Above the shoestrings for that matter. Seems like maybe Coach Ryan Smith told me Marshall hooks up a Peterbilt and pulls it down the country roads for leg strength. Last season quarterback Logan Weir would just take the snap, whirl around, pitch it to Marshall and watch the fun. And my goodness could that Panther line block.....wow!

Gaige Marshall is kind of a difficult back to describe. At first glance one would say "power back with fine speed, great ability to follow his blockers", nothing fancy. But if you watch enough of Marshall's runs you will discover that he has cutting ability, albeit not sharp, it is quick enough to leave defenders grabbing nothing but air. Gaige also probably set a record at Hershey for breaking the most arm tackles. This guy has the power to run over defenders and shed 'em one after the other. Marshall carried the ball 16 times a game and scored 10 touchdowns, 9 by the rush.

So much fun to watch that offensive line left side of Lane Richardson (#77), Ariel Quiroga (#62), the right side of Jacob Kugler (#65)and Justin Weir (#50) and the all-state Adam Steffes (#53) open those lanes for #26. Richardson will return for 2 more seasons and Kugler will be around for one more.

Let me tell you something about Hershey high school football. These young men know the fundamentals of football. From top to bottom. Ryan Smith comes from a great coaching family and this man knows his stuff...ask Carl Tesmer. The Panthers will come to Central Nebraska twice in the first 3 weeks of the season, opening at Arcadia/Loup City then travelling to Doniphan-Trumbull on Sept. 12. They also play Hastings St. Cecelia and Wood River during that opening 4 week stretch.

If you haven't seen this bunch play, treat yourself and catch a game. Gaige Marshall is fun to watch along with those other Panthers who should be a contender in Class C-2 this season.

Before this weekend is over we will give you the capsules on five more returnees from the 1000 Yard Club........and they are:

........and that's some awfully talented folks there, my friends.