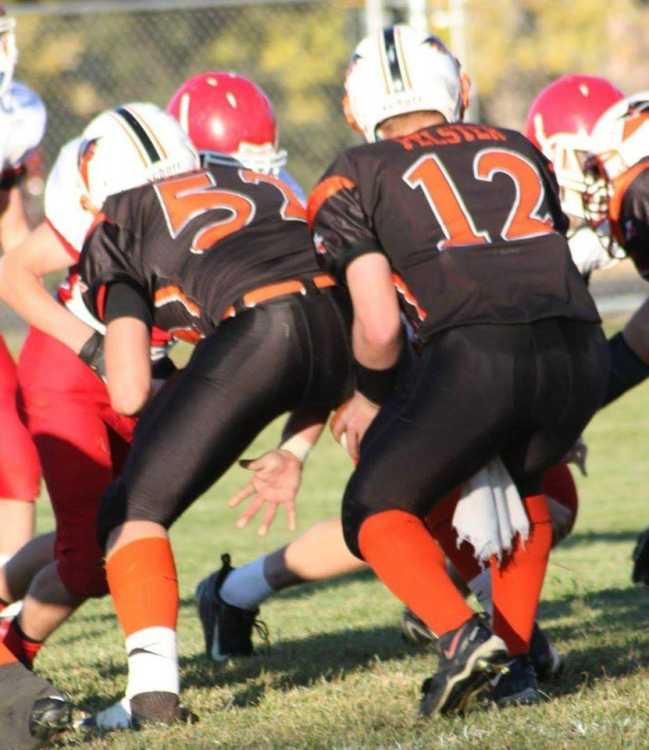 CWC's Brenden Pelster (#12) gets set to do some damage.

Today we shine the bright lights on some pretty sweet runners. This group was a fun bunch to watch in 2013 and should cause opposing coaches some nightmares trying to devise a way to put the stops on any one of these touchdown machines.

Not a back on this list any coach in the state wouldn't love to have.

Just a little word of friendly advice. You don't want to try and tackle this guy one on one. Becker, who will be going for his 3rd consecutive 1000 yard rushing season, probably has more yards after contact than any back in C-2. When #42 gets his wheels rolling it takes more than just a few defenders to bring him to the turf. Ryan Becker takes off on that quick pitch and follows his blockers very well, makes a subtle cut, then kicks it into a second gear. And consider the fact that Becker competed in the most brutal district in the state, regardless of class, to pile up these stats.

Becker's lower body strength is up there with the best and this kid knows when to wrap the ball up when he makes contact. I couldn't find all of his stats but it's a safe bet he rarely fumbled. #42 is also an excellent linebacker who had 76 tackles as a sophomore.

Becker and his Trojan teammates are out to avenge a heartbreaking 28-27 overtime loss they suffered to Lutheran High NE in the 2nd round of the playoffs a year ago. Keep an eye on this kid and HCC in 2014. Becker is a tough as they come. They're all tough at Cedar, aren't they?

If there were a Dancing With The Stars competition for high school seniors, Matson would run away with the whole shootin' match. For a kid this size, #44 might have the quickest, smoothest feet in Class B.

Trevor Matson has a sliding, gliding running style that just makes defenses feel like they're not tackling. The 190 pound Matson has cuts that are so astute, it almost appears that he freezes momentarily, leaving defenders with empty pockets as he continues down the field. Honest to goodness, this is how my high school coach taught me to run a hundred years ago, but Matson has refined the style to a tee since my leather helmet days.

Trevor "Twinkle Toes" Matson improved as the season progressed in 2013 and helped the Bison come within a touchdown of getting to Lincoln. #44 lined up as a flanker or an I-Back, and was difficult to keep track of in that multi-formation McCook offense. Matson is a very good receiver out of the backfield and is a nice defensive back too.

With quarterback Colton Sis and 15 other starters retuning for Jeff Gross and his Bison, Matson should really have some fun this fall. If they can find a fullback to replace the great Kolton Stone, McCook should be a serious player in Class B. With one of the best QB's in the state, a Super State kicker, and a running back that tap dances his way to the end zone, running over a few on the way, this group may just be in Lincoln.

Oh good lord, where do you start? I have to inhale/exhale about 20 times, feel my pulse, and settle down after watching his films. This young man can single handed change a football game. The only time I saw him fail to do that was against Cozad and he was hurting, plus Cozad was unreal.

This go around may be different. The Cardinals lost some good players via graduation, but super coach Arnie Johnson has a gazillion kids out for football and simply reloads his talent. My goodness Arnie Johnson is a smart man, wow.

Check out Mazour's 2013 stats and remember he missed 2 entire games. 165 carries for 1,228 yards rushing and 24 Tds. 105 of 172 passing for 1,608 yards and 11 scores. That's 61% accuracy on those passes. From his corner back position, Mazour picked off 4 aerials, returning one for a TD. A deadly, deadly kick and punt return man, opponents dread the though of giving this magician that much space to work with. As many backs as I've seen over the years, honestly I really can't find the words to describe Wyatt Mazour's running style. Lightening fast, quick cuts, instant acceleration, outstanding vision, beautiful cutback capability, and above all, a coach on the field (as if Arnie needs one.) This kid reminds me of Doug Flutie. Yeah I know, that's a long time ago.

The frightening thing this fall is that Mazour is 10 pounds heavier and probably a shade faster. Promise me if any of you are withing 60 miles of Albion, or wherever Boone Central/NG is playing, go take in a game. It is a rare treat indeed to watch Wyatt Mazour and the sound fundamentals these Cardinals display on the field. If Mazour can stay healthy all season, this club will be right there at the end.

Was I in for a surprise when I saw this young man play against Doniphan-Trumbull a year ago. It was Blue Hill's 2nd game of the season but apparently Drury's 1st outing. In just a quarter and a half Drury rambled for 109 yards on only 11 carries and scored on a 52 yard TD run. Had it not been for 2 senseless tackles after the whistle, this kid would have made a heck of a difference the rest of that one. As it stood, the elusive scatback was knocked out of the game wondering if he would be back the next week or the week after. Drury was back the very next game, not missing a minute.

Keithen Drury has a terrific 1st step out of the backfield and with his low center of gravity and sprinter speed, he followed his big line to perfection all of last season. The Bobcats have long been known for their defense, but don't kid yourself, this team can score. In 9 games last season, Drury averaged nearly 8 yards a crack and scored 13 rushing touchdowns. A solid ball protector, #24 fumbled only twice in a 162 carries.....you just don't fumble at Blue Hill don't cha know. Keithen recorded 57 tackles from his free safety slot and pirated 3 passes to boot. Drury was, of course, a feared return man with his wheels.

Drury and his Bobcat teammates will experience something this school hasn't seen in a long while. Blue Hill drops to the 8-Man ranks and by the looks of the class numbers at the school, they may be there a while. Blue Hill will compete in D-1, District 9 along with Arapahoe, Axtell, Elm Creek, Franklin, and Shelton. Class D-1 just got tougher folks. If Keithen Drury has any blocking at all in 2014, this guy will open some eyes. Great East/West runner who is a extremely talented vision back. If he gets by you, "He Gone", as Chicago White Sox broadcaster Ken Harrelson says. I like this kid and his coach, Scott Porter.

This guy is pure football player and a big FFA guy to boot. ( I LOVE the Future Farmer of America organization) After losing their first 2 games last year, the Renegades reeled off 8 straight wins before running into the Hemingford buzz-saw in the D-1 second round.

This year CWC drops to D-2 and will be in a one of the most brutal districts in any class, knocking heads with Osmond, Randolph, O'Neill St. Marys, Stuart and Wausa. There should be a law against that many great teams in one district. But here's the deal about this football team this fall. They return Both their offensive and defensive line in intact.....yeah. 6 starters back on both sides of the ball and I think they'll need it, but how sweet is that?

That line protecting and blocking for Pelster goes 200, 230, 250 and 285. The 250 pounder is a brute by the name of Jayle Hinkle. Don't call him a name and run. The Renegades will have to shore up that secondary, but I'm betting that Brenden Pelster will be a 1000 yard rusher and passer in 2014. And yes, I WILL see this youngster play this fall.