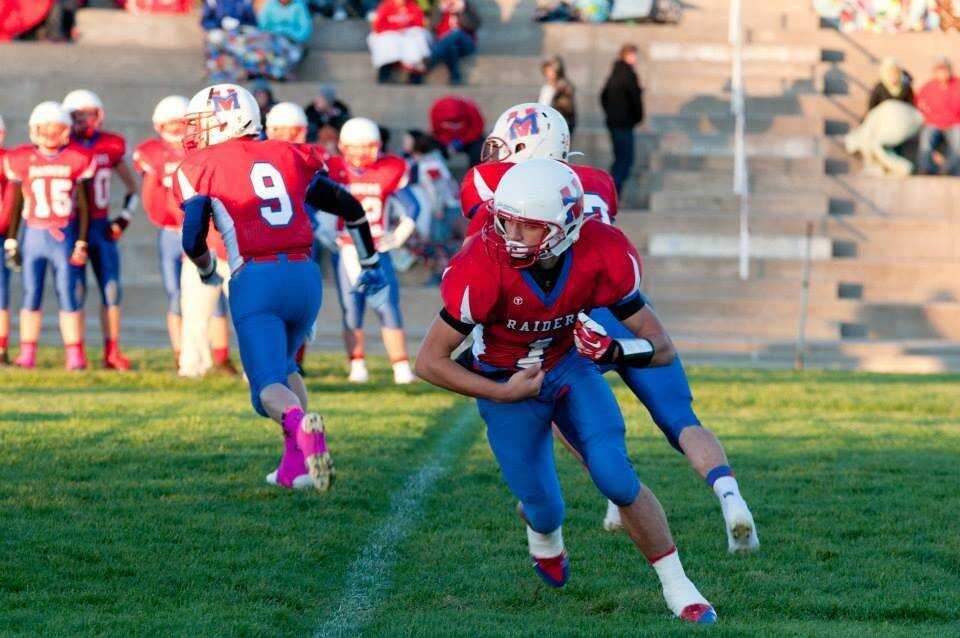 Medicine Valley's Chase Barthel (#1) slips away for some yards.

We're getting up to the 1,200 yard range with some of these terrific athletes. 37 runners who reached that magic plateau a year ago are back to cause headaches for defenses. We'll turn the spotlights on five of these young men in today's article.

Last season Tre Sanders inherited the featured back status from the splendid Jackie Davis and filled those big shoes very well. After losing it's first 2 games to quality opponents, the Omaha Central won 6 of their next 7 outings including a regular season 28-7 pasting of Creighton Prep. Tre Sanders is not very big but can cut on a dime with his lightening quick short plants that leave defenders grabbing thin air. Tre Sanders cuts are really kind of unique compared to some former Central backs I have seen. Number 6 just kind plants his foot then glides and slides, slithering through the tiniest of spaces while keeping the shortest, straight-ahead path to the goal line. Sanders wastes no lateral yards when he runs, always looking for the middle of the field. Great back at reading his blocks and reacting in a heartbeat to turn on the jets.

2014 should be a very good year for Omaha Central. The Eagles should be right up in the mix for the Class A title. They need a QB to emerge but they certainly have an outstanding running back in Sanders, who also just happens to be a quality defense back. Along with Calvin Strong, this kid is one of Class A's elite runners with :10.7 hundred meter dash speed. Get to a game in Omaha and watch Tre Sanders play if you can....he's fun to watch.

Mr. Benson isn't the biggest back in the West but knows how to follow his blockers and accelerate at the right time. Benson carried the ball a lot for the Bearcats last season, 18 times a game, and still averaged 6.26 yards a pop. #21, like smaller predecessors for the 'Cats, is very durable for his size. Scottsbluff seems to be famous for producing undersized running backs who are faster than blazes and can absorb punishment and stay healthy for the entire season.

Ty Benson had his best game a year ago when he shredded the Holdrege defense for 225 yards on 18 carries and 2 scores. Benson scored 11 rushing touchdowns in 2013 and caught only 8 passes for 166 yards, but two of those were for scores. One was a sparkling 63 yard beauty against Northwest.

Maybe it was because fullback Leighton Freeze was 4 inches shorter, but Wyatt Pankowski, all 6-3, 205 pounds of him, looked like an imposing figure standing 7 yards deep in that Bridgeport I-formation. Pankowski not only looked the part but ran the ball like it too. Boy did he and quarterback Jamie Gonzalez have that pitch play down to an exact science. The last minute pitch by the multi-talented Gonzalez to Pankowski was a bread and butter play that worked like a charm for the Bulldogs. Pankowski is very swift for his size and when he gets that 205 pound frame rolling it's like a runaway freight train. Some of his runs looked like a bowling ball mowing down pins that were flying everywhere. I knew this kid is the real deal when he rushed for 623 yards as a freshman. In 11-man football, that is impressive, real impressive.

Pankowski was just a terror to undermanned teams like Mitchell and Bayard, but Crofton found out how good this sophomore was in the 1st round of the C-2 playoffs. #14 carried the ball 22 times for 149 yards and a score in a 28-14 loss to the Warriors. This fall Pankowski will surely miss his QB/pitch out man but should still have a terrific season. Tough district for the Bulldogs for sure with North Platte St. Pats, Hershey, Cambridge on the schedule, but #14 will get his yards.

This young man will just get bigger, stronger, and better as time goes by and the scary thing about Pankowski is that he has two more years to strap on the pads for Bridgeport. Watch for this guy's stats in 2014.

Another small dynamo like Benson of Scottsbluff except shorter in stature. Holy smokes were Henneman and quarterback Alex Brehmer a frightening sight for D-2 opponents last season. Brehmer was one of the best athletes in D-2 the past 3 seasons and teams that played Lyons-Decatur NE concentrated on the QB so heavily that Henneman made 'em pay for leaving him alone on certain plays. It wasn't like Henneman didn't tote the ball much because he averaged almost 18 carries a contest for the Cougars, who not only made the playoffs, but advanced to the 2nd round.

Lyons-Decatur NE was an explosive team, averaging 48 PPG and could score in a hurry thanks to the shifty, lightening fast Henneman.

#6 was just a blur when he touched the football last season. Lightening in a bottle described the way Henneman ran when they opened the chute. Blessed with blazing speed and precision cuts, Henneman often pulled the Houdini act, disappearing into the line then popping out and leaving the pile in the dust for a score. Chevy Henneman was held under a 100 yards rushing only twice in 2013 and scored a TD in every game but the 56-14 loss to eventual D-2 champ Falls City Sacred Heart in that 2nd round playoff game. The slippery Henneman was also a feared kick return man, averaging 23 yards a touch on 18 returns with one score. And on defense, he was a terror at linebacker......that's right....making 77 tackles from that position.

This guy is just a kick to watch, like a spinning, electric water bug with sprinter speed. I still wonder if he drives a Ford.

Barthel is one of those dual threat quarterbacks that coaches just love. #1 has played on 3 Medicine Valley teams that have advanced to the quarterfinals in each of those years. Last season, Barthel made the switch to quarterback and responded with 1,327 yards rushing and 18 touchdowns and passed for 847 yards and 15 scores with only 4 interceptions.

The quick, nimble signal caller also made 37 tackles from his DB slot and pirated 2 passes.

Barthel had back to back 200 yard rushing games in 2013 (Brady and Hitchcock County) and led Medicine Valley all the way to those D-2 quarterfinals before losing 44-20 to runner-up Stuart on the road. Chase is a standout player on the basketball court too, averaging double figure scoring the past 2 seasons. This guy just knows how to win. I see no reason why Barthel and his Med Valley teammates shouldn't have another great football season this fall. The Raiders are in the D-2-8 district with Eustis-Farnum, Hitchcock County, Southwest and Wallace.

Chase Barthel is a winner, pure and simple. Besides, Medicine Valley has ultra cool football uniforms.