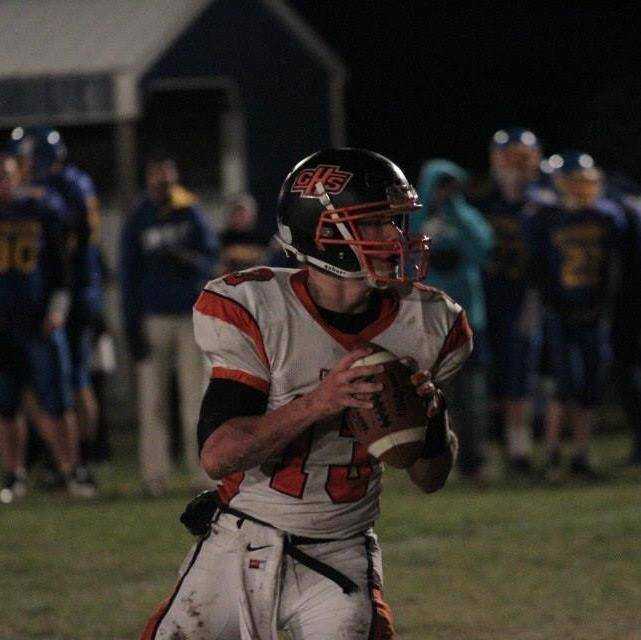 Giltner's Ben Hinrichs gets set to fire another TD pass.

No wasting time here. Let's hop to it and do it high school football fans. Here is the 2nd installment of returning 1000 yard rushers and what we might expect from these athletes in 2014.

There's no doubt about it, Jonathan Smailys enjoyed running behind an experienced line last season and when needed, a tough blocking fullback. The purple clad Eagles had a terrific football team a year ago that lined up in a tight offensive formation, sometimes with three backs, and just steamrolled opposing defenses. Despite those defenses often times putting 9 players in the box, Arlington rolled to a 6-2 regular season record only to lose a heartbreaking 21-20 game to Wilber-Clatonia in the 1st round of the C-1 playoffs. Number 27 got the ball a ton last year, 218 times to be exact, and blasted his way to a 1000 yard junior season.

Smailys actually carried the ball a stunning 77 times the 1st two games of the season a year ago, including a 45 carries for 178 yards, 3 touchdown grind against Lincoln Christian in a 32-26 loss. Jonathan's finest hour may have been against Boys Town when he ripped the Cowboys for 237 yards on 25 touches, while scoring 2 touchdowns.

This season will be a test for Smailys considering Arlington has only 4 returning starters on each side of the ball, but head coach Steven Gubbels is a master as witnessed by his teams making the playoff in 10 of the last 11 seasons. If the Eagles develop an offensive line, Jonathan Smailys may get another thousand yards in 2014. This guy is a workhorse.

Quite a storyline on Mr. Hinrichs a year ago on the gridiron. Going into 2013, Giltner was coming off a State championship (2012) with a quarterback named Jake Findley who set the 8-Man single season passing record with 3,903 yards. The heir apparent at QB last year seemed to be junior Jared Hastings with his classmate Ben Hinrichs playing the split end position. At Giltner, playing the WR position means a substantial number of rushing attempts thrown into the deal. Well, after an opening game shocker, a 20-16 loss to BDS, super coach Jeff Ashby had Hastings and Hinrichs swap positions and all Ben Hinrichs did was go on to be Giltner's 1st ever quarterback to pass for a 1000 yards AND run for a thousand as well.

Just like many Hornet signal callers of the past, Hinrichs is a master of trickery when he gets the direct snap. The past couple of seasons, Ashby had the Giltner offense almost impossible to defend with their unique passing attack, but this fall the Hornets will cause more headaches for opponents with the running/passing ability of the 5-9, 158 pound Hinrichs. A year ago, Ben Hinrichs passed for 1,531 yards and 27 scores and ran for 1,066 yards on only 118 carries (9.03/carry) and 17 more TDs. You just held your breath every time this young man touched that football................and he touched it every play. And on defense, Hinrichs was good enough to make all-state at linebacker in my book, recording 80 total tackles, including 10 solos in that heartbreaking 52-50 season ending quarterfinal playoff loss to the fire bombing Wynot.

Giltner is loaded again this season with 7 returning players on defense and a potent offense to go along with it. The Hornets are in D-2 again and don't be surprised if Hinrichs leads this team to Lincoln. He's that good. Doesn't hurt either to have a head coach with a career record of 169-58, and without a doubt I think Jeff Ashby is one of the smartest 8-man football coaches in this state. The man makes few mistakes and if there are any, they are soon corrected.

It's safe to say that the hard charging Buhr had a sparking junior year for Freeman. He, and quarterback classmate Isaac Frerichs formed a fearsome duo on offense while leading the Falcons to an 8-2 season. Their with the only losses came to the mighty Howells-Dodge and eventual state champion Exeter-Milligan in the 2nd round of the D-1 playoffs. Buhr has been an all-district selection the past 2 seasons for Freeman and in addition to being a fine running back, is a fierce, hard nosed linebacker with a nose for the ball carrier.....takes one to know one type deal don't cha see. Last season Jacob Buhr had 118 tackles which is nearly 15 a game. That's a bunch folks. Freeman's last regular season game and 1st round playoff opponent was tough Friend and Buhr couldn't have been a better defender. Buhr recorded 14 solo tackles in BOTH games and scored 2 Tds in each contest.

Number 24 was also a steady pass receiver out of the backfield, hauling in 30 receptions for 308 yards and 4 scores. Buhr also had nearly 300 yards in kick and punt returns to pad his all purpose yardage total for to 1,673 yards in 2013. Jacob's finest hour as a runner came in a 32-28 win against powerful Lourdes Central when he rushed 37 times for 181 big ones and a touchdown.

This season will mark be a brand new experience for Jacob Buhr and his Freeman pals as they enter the world of 11-Man football and jump to C-2 for the 1st time I can ever remember...even when they were Adams and Ken Cook was coaching they were always 8-Man. Interesting times ahead for Buhr and friends. Always a challange to move up to 11-Man when you have been 8-Man since God was a kid.

Last season quarterback Bruce Schulenburg led the Trojans to their first winning season since 2006 and their 1st playoff appearance since 2010. An imposing figure under center, Schulenburg led Scribner-Snyder to a 5-3 regular season record that featured one of the most shocking wins in recent years when Scribby trounced the usually powerful Bancroft-Rosalie team 58-6.

Bruce Schulenburg had his Trojan team in almost every game last season against some pretty salty opponents. Only 2 teams on Scribner-Snyder's regular season schedule failed to make the playoffs. Check this out: No team beat Schulenberg's squad by more than 14 points and that included state D-2 finalist Stuart (20-34), and powers Humphrey St, Francis (20-34), and Lyons-Decatur NE (36-50). The Trojans bested a good Osceola team 30-14 too and lost to Sterling 36-28 in the 1st round of the D-2 playoffs. In that Sterling game, Schulenberg had 2 first half TD jaunts of 25 and 46 yards on his way to 125 yards rushing but Scribner-Snyder just couldn't hold on.

Bruce Schulenburg has added 25 pounds to that tall frame since last season and can be counted on to be an even better defender from his defensive end position. This young man has brought some pride back into Scribner-Snyder football and should enjoy his senior season. The Trojans will be in the D-2, District 1 wars in 2014 with West Point GACC, Omaha Nation, Pender, and Winnebago.

The younger bro of former all-state running back Chance Younger, Tyrell made his full time debut last year as a sophomore and made some huge noise. Not a lot of details of this kid, but I do know Tyrell had 390 yards his first 2 games last year and averaged 12.2 yards a touch before going down in the 3rd game in a loss to Hitchcock County. Younger must have recovered later in the year because he eventually rushed for 1,090 yards and scored 16 touchdowns. Younger also caught 12 passes for 227 more yards and had 2 receiving scores.

On the defensive side of the ball, he registered 77 tackles, picked off 4 passes and had 7 tackles for losses to boot. There is no doubt about this young man's athleticism. Younger pole vaulted 12-6 as a freshman, just missing a place at the state track meet. In May, Tyrell vaulted 13 feet and grabbed a 7th in the PV and nabbed an 8th place medal in the 300 meter hurdles. If he has any kind of line, Tyrell Younger should be a shining star this fall and have an equally successful season as a defender.

Stay tuned for more info on this guy.