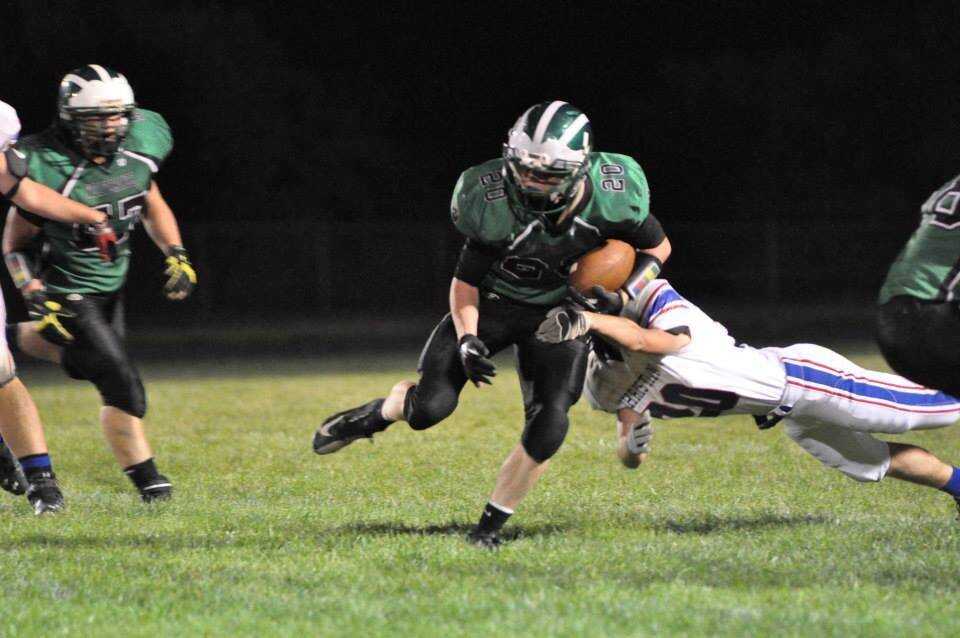 2014 will feature the return of 37 Nebraska high school running backs that topped the 1000 yard rushing mark last season. This unusually high number of runners that eclipsed the magic thousand yard plateau should make the upcoming season an exciting one for year's prep football class. Of course, what high school football season isn't a blast? Today marks 30 days on the button until the 2014 season gets underway.

Fall practice begins on Monday, August 11th for all teams. I wish it started tomorrow.

This is the first in a series of articles highlighting 2014's top running backs. Let's cut right to the chase.

The 5-10, 175 pound Chrisman has been a starter on defense since his freshman season at McCool and all-district in each of those last 3 campaigns. I saw this lad play in a frigid,horribly, ice cold playoff game against one tough West Point Guardian Angels CC team in 2012 and sparkle from his linebacker position. During his first two seasons, he played in the shadow of 3 year thousand yard runner Jac Bailey, but last year took over the go-to role and responded with 1,012 yards and 13 Tds. It might also be noted that despite Bailey being there his sophomore year, Chrisman still managed to run for 626 yards a 12 scores. A pure football player that packs a punch on defense, Chrisman's best games seem to come when the competition was at it's best. Number 22 ran for 150-25 carries in a 36-19 loss to a rugged BDS team and made a staggering 16 solo stops in a 58-36 loss to a fine Henderson Heartland squad. Also an outstanding pole vaulter in track, Chrisman should shine this fall and make his Mustang team contenders in D-1, District 4 which includes BDS, Diller-Odell, Friend and Pawnee City.

This fall should see Stoller's work load increase as a ball carrier. Falls City is also in a very manageable District (4) but will have to contend with a very good Syracuse team.

I'm betting that everybody who plays the Wolverines are hoping Carter is the last Zlab in line to play football for Wilber-Clatonia. Like his two older siblings, Carter Zlab is lightening fast and has been part of a team that has not only made the playoffs the past 3 years, but has won a 1st round game. We all know traditionally how tough C-1 has been on the gridiron, and despite that I'll still say Zlab may be one of the best all around athletes on the football field in that class. Always overlooked, the Wolverines fashioned a 5-3 regular season record before falling to C-1 finalist Ashland-Greenwood 28-23 in a second round thriller.

The 5-11, 165 pound Carter Zlab averaged a smidge over 6 yards/carry and rushed for 10 scores in 2013. The nimble Zlab also caught only 8 passes but averaged 28 yards a catch and snared a TD reception. He also made 32 tackles DB slot and pirated 2 passes.

Number 20 is a pretty tough cookie when it comes to crunch time too. In that 2nd round playoff loss to Ashland-Greenwood, Zlab toted the ball 31 times for a season high 213 yards and two touchdowns. Any thoughts that Carter Zlab may be too light to be durable are foolish indeed.

Wilber-Clatonia will compete in C-1, District 6 with Lincoln Christian, Lincoln Lutheran, Milford-Dorchester, Fairbury, and Raymond Central. With a nice offensive line returning in 2014, Zlab should enjoy an outstanding senior season. Is he finally the last Zlab?

You want to see a player that can do it all, make a "beeline" to see Beckmann play football this fall. The 180 pounder sheds more tacklers than almost anybody you'll see....like water off a duck's back I tell you. And #24 was a workhorse for the Bees a year ago, carrying the 198 times in only 8 games....25 times an outing. Bloomfield suffered two absolutely horrific losses to Creighton, 80-0 during the regular season and 88-12 in the 1st round of the playoffs (no comment) and in those 2 losses, Beckmann had only 20 carries combined. He also missed a game with an injury. But I'm telling you, Cody Beckmann can flat out run over people, around 'em with his great speed, and is a dangerous weapon when retuning kick-offs. Beckmann had 119 yards receiving and fumbled only once all of last season despite that rugged running style. Impressive in this day and age.

If Bloomfield has any line whatsoever, Beckmann will have a ton of yardage in 2014. This kid just blew my mind with his balance and ability to knock people over and keep on running. And once Cody turns the corner, there aren't many that can catch him in the open field. Keep an eye on number 24 this fall.